Trump believes a war will bring us together behind him 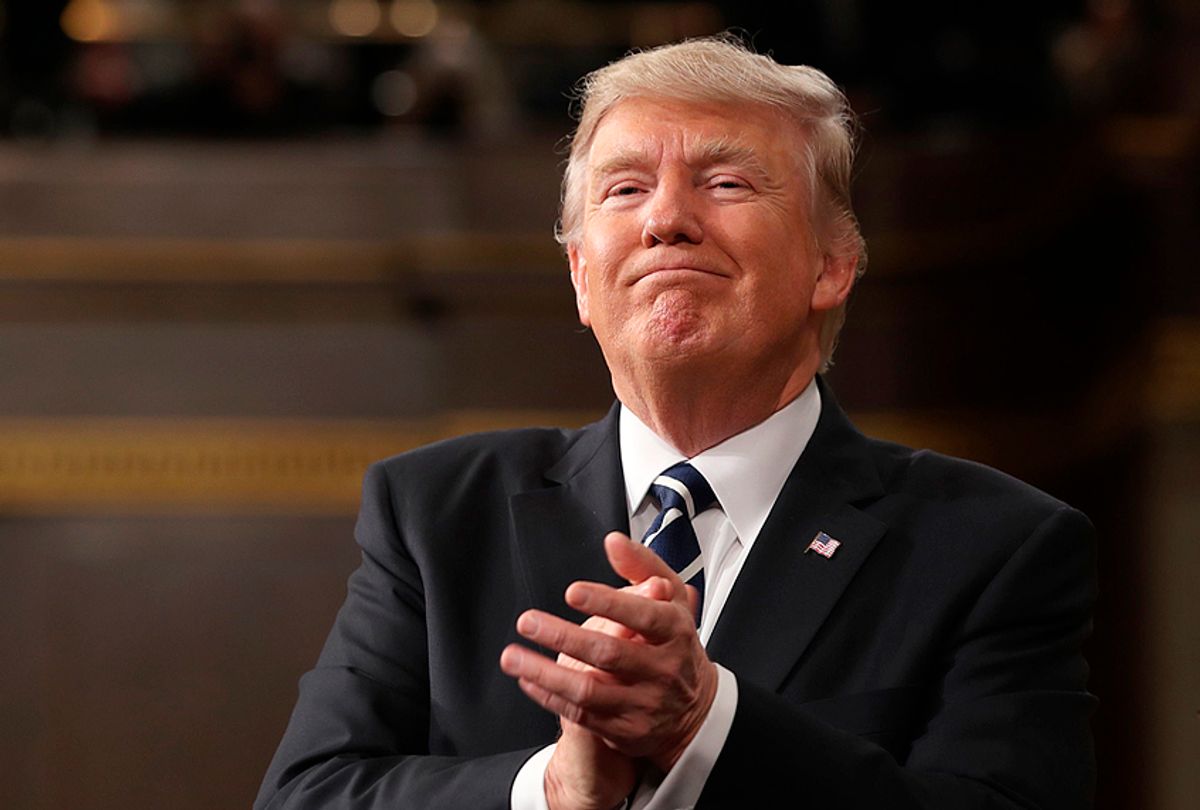 There are two bright-red warning lights flashing right now on the dashboard of what’s left of American democracy. While Donald Trump is hyper-aware of both of them, the media and most of our politicians are ignoring them.

They are War and Crash.

War is one of the principal instruments of power-grabs by strong-man governments, and Donald Trump isn’t missing a beat. While hundreds of thousands of civilians in Syria right now haven’t had any humanitarian aid since November of last year and are literally dying as you read these words, Trump wants to amp up his bombing of that country.

But the biggest threat may be an unnecessary (but short-term politically useful) war with North Korea or Iran.

The day of his State of the Union speech, Trump met with a group of newspaper editors, and apparently harkening back to George W. Bush’s strategy, talked about how useful a war could be for a politician who wants the entire nation to love him and unite around him. He said: “I would love to be able to bring back our country into a great form of unity. Without a major event where people pull together. That’s hard to do."

Perhaps considering how Americans might react to such a statement from a president, he backtracked a bit in the next sentence: "But I would like to do it without that major event, because usually that major event is not a good thing.”

Similarly, while campaigning in 1999, George W. Bush told his biographer, Mickey Herskowitz, that if he became president, he wouldn’t make the mistake his father made in having only a short and limited war with Iraq; he’d have a big enough war so he’d become a “war-time president” with enough political capital to do things like privatize Social Security.

Cindy Sheehan talked about this when she testified in front of Congress in 2005. Speaking before a committee put together by John Conyers, she said:

“[I]in interviews in 1999 with respected journalist and long-time Bush family friend, Mickey Herskowitz, then Governor George Bush stated, 'One of the keys to being seen as a great leader is to be seen as commander in chief. My father had all this political capital built up when he drove the Iraqis out of Kuwait and he wasted it. If I have a chance to invade, if I have that much capital, I'm not going to waste it. I'm going to get everything passed that I want to get passed and I'm going to have a successful presidency.’”

Now the only question is, which country will provide Donald Trump’s unifying event. Will it be Syria, Iran or North Korea? Although Trump has radically escalated our military actions in Iraq and Afghanistan, leading to a spike in both US soldier and civilian deaths, it’s being largely ignored by the media.

But Iraq and Afghanistan are so George Bush. Thus, Trump reasons, he needs a “Trump war” to bring us together behind him.

Another possibility is that he’s doing everything he can to both provoke North Korea and Iran, and piss off radicalized Muslims worldwide and in the US to attack us, so he can use that as well as George W. Bush used 9/11.

The Pentagon is apparently so freaked out about this possibility that it's refusing to hand over to Trump limited-war plans against North Korea. As noted in the New York Times: "[T]he Pentagon, they say, is worried that the White House is moving too hastily toward military action on the Korean Peninsula that could escalate catastrophically."

I wrote in 2003 about how wannabee dictators use attacks on a nation to consolidate power and strip human and civil rights from the populace; we need a national debate/discussion of how Bush exploited 9/11 and the long-term damage that exploitation has done to our national interests.

And we need to learn from that lesson and keep a wary and watchful eye on what Trump may do — and perhaps even consider legislation to require a declaration of war from Congress (as the Constitution mandates) before he can engage in any more military actions.

A Great Crash is, as we learned with the Republican Great Depression (yes, that’s what they called it until the 1940s) and FDR’s rise to power, another way that a president can pull a country together. I laid this scenario out in my book The Crash of 2016 which, while mis-timed, still lays out a pretty clear vision of how the Powell Memo was used by billionaires to hijack democracy, and how it may play out.

Apropos of that, the bond market is right now going nuts. And it could take down our entire economy, largely because the #GOPTaxScam just forced our government to quickly sell almost $1.5 trillion in bonds (how our government borrows money) to pass hand that cash over to the #MorbidlyRich billionaire class.

Normal economics dictates that when a country is doing well, it should pay down its debt and invest in its people and infrastructure. During bad times, the nation then has the room to borrow to stimulate the economy and recover from a downturn.

As John Dizard wrote for the Financial Times, the Republicans have decided not to follow that simple game plan that has kept countries stable for centuries. He writes:

“Unfortunately, that is not the case. The administration and Congress have chosen to cut taxes when the economy is at full employment.

“So the Treasury has to push out bond issues, mostly at the shorter end of the yield curve, just as the Fed has finally decided to reduce the size of its balance sheet [sell bonds] and raise short-term policy rates. This is not good timing.

“A lot of older people and opioid addicts must rejoin the labor force and work efficiently to keep the economy ticking over without an inflationary blowout or a bond market crash.”

And a bond market crash (a rapid increase in the yield that new bonds pay, dropping the value of existing/older lower-interest-paying bonds) can kill the boom in the stock market by increasing borrowing costs, particularly when companies across the nation are leveraged up to their ears as is the case today.

But billionaire Trump and the billionaire-funded Republicans (and their billionaire-owned “news” channel), true to color, are only interested in what will increase billionaire wealth over the short term, regardless of how badly it devastates working people or the nation long-term.

So when eight years of rational Obama policies (opposed by Fox and the GOP at every turn) handed Trump a strong and growing economy last year, he and his Koch-head buddies in Congress decided to borrow $1.5 trillion and hand it over to the billionaire class (along with a one-time “bonus” to a few workers).

Much of the trillions handed to corporations with the tax cut are being used right now by US companies to do stock buy-backs (illegal before Reagan, still illegal in many other countries), thus artificially inflating the companies’ stock prices while adding exactly nothing to the economy or workers’ wages.

This may stave off the stock market reckoning for as much as a year, but over the long term, it will make the fall all that much more violent.

We watched George W. Bush do the same thing, and it ended in the disaster of the Bush Crash of 2008.

Hang onto your seat and get ready. The Trump Reality Show, in all its sick horror, is just getting underway.