After bashing black NFL players for months, Trump suddenly cares about one who died tragically 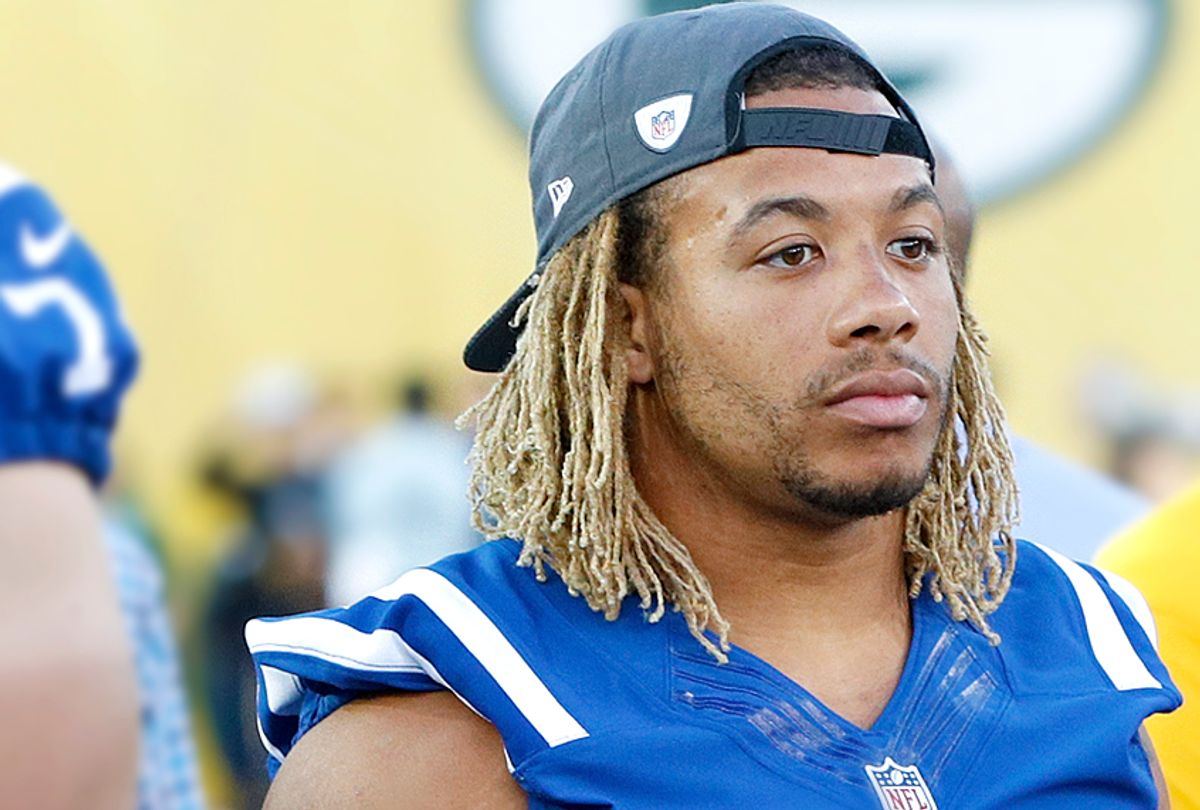 President Donald Trump referenced the Sunday death of Indianapolis Colts linebacker Edwin Jackson while calling on Democrats for a stricter stance on immigration on Tuesday.

The football player and his driver were fatally killed Sunday morning after an allegedly drunk driver crashed into them on an Indianapolis interstate highway while they were pulled over on the shoulder of the road. The drunk driver, identified by the Indiana State Police as Manuel Orrego-Salva, is a citizen of Guatemala. Orrego-Salva has been in the country illegally and had been deported twice, in 2007 and 2009, according to authorities. He was also driving without a license.

"So disgraceful that a person illegally in our country killed Colts' linebacker Edwin Jackson. This is just one of many such preventable tragedies," Trump said in a tweet, "We must get the Dems to get tough on the Border, and with illegal immigration, FAST!"

In a second tweet, the president said his "prayers and best wishes are with the family of Edwin Jackson, a wonderful young man whose life was so senselessly taken."

Hours later, the president continued to harangue Democrats about immigration.

Trump was not the only politician to spin the fatal crash into political hay. Republican Indiana Rep. Todd Rokita also used the linebacker's death in his call for building a wall on the U.S.-Mexico border. "The loss of life at the hands of illegal immigrant criminals should make all Hoosiers sad and ultimately angry," said Congressman Rokita. "We must do more to get these dangerous illegal immigrant criminals off of our streets, and guarantee this never happens again by building a wall, ending sanctuary cities, and stopping illegal immigration once and for all."

The Indiana Police Department believes the Colts player and his driver, Jeffrey Monroe, stopped on the side of the road after the football player became ill. Monroe had pulled over to assist the linebacker when he and Jackson were struck by the drunk driver. The two had been pronounced dead at the scene by the Marion County Coroner's Office.

Trump has frequently criticized NFL players who protest racial inequality and police brutality by taking a knee during the national anthem at NFL games, suggesting owners fire the predominantly black "son of a bitch" players who do so. Just last week during his first State of the Union address, the president not so subtly brought up the NFL anthem protests when he said, "We proudly stand for the national anthem." Jackson does not appear to be among those who took a knee, yet it is nonetheless notable that, after showing little care and respect for black NFL players, Trump would offer both those things to one who just so happened to die in a manner that was convenient for the president.