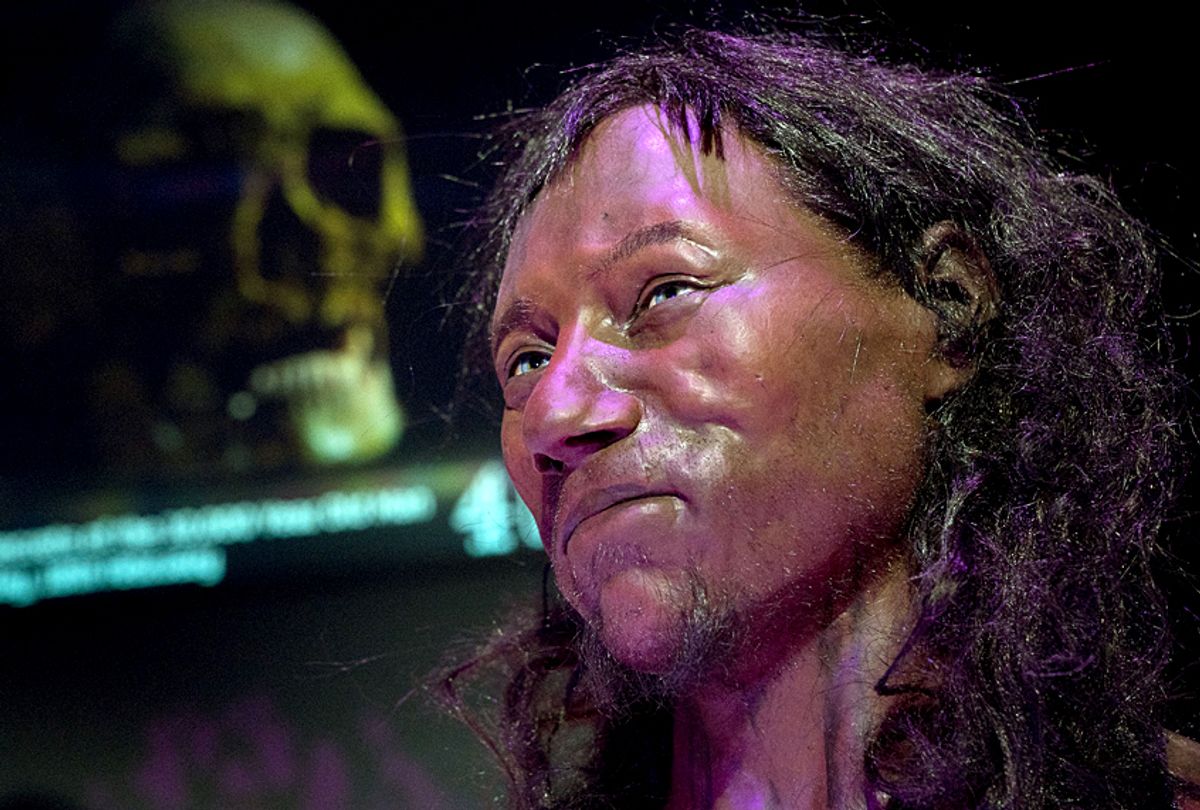 A full face reconstruction model made from the skull of a 10,000 year old man, known as 'Cheddar Man.' (Getty/Justin Tallis)
--

A DNA analysis of Britain's oldest complete skeleton, also known as "Cheddar Man," revealed that the first modern Britons may not have been pale, as many people may have assumed, but had "dark to black" skin, the Guardian reported.

The fossil, discovered over a 100 years ago in Gough's Cave in southwest England, has sparked much speculation about Cheddar Man's appearance and the origins of Britons living 10,000 years ago. According to scientists, 10 percent of those with white British ancestry are descendants of this ancient population.

"It was initially assumed that Cheddar Man had pale skin and fair hair, but his DNA paints a different picture, strongly suggesting he had blue eyes, a very dark brown to black complexion and dark curly hair," the Guardian reported. "The discovery shows that the genes for lighter skin became widespread in European populations far later than originally thought – and that skin color [sic] was not always a proxy for geographic origin in the way it is often seen to be today."

Tom Booth, an archaeologist at the Natural History Museum who worked on the DNA analysis, told the Guardian, "It really shows up that these imaginary racial categories that we have are really very modern constructions, or very recent constructions, that really are not applicable to the past at all."

Yoan Diekmann, another team member and computational biologist at University College London, told the Guardian that the association often assumed between Britishness and whiteness was "not an immutable truth. It has always changed and will change."

"First Brit: Secrets of the 10,000 Year Old Man," a Channel 4 documentary which airs February 18, documented the DNA project at the Natural History Museum in London, including a forensic reconstruction of Cheddar Man’s head. The scientists involved drilled into the skull to access bone powder and, from there, extracted a full genome, which revealed evidence about Cheddar Man's appearance and origins.

"The results pointed to a Middle Eastern origin for Cheddar Man, suggesting that his ancestors would have left Africa, moved into the Middle East and later headed west into Europe, before eventually crossing the ancient land bridge called Doggerland which connected Britain to continental Europe," the Guardian reported. "Scientists believe that populations living in Europe became lighter-skinned over time because pale skin absorbs more sunlight, which is required to produce enough vitamin D. The latest findings suggest pale skin may have emerged later, possibly when the advent of farming meant people were obtaining less vitamin D though dietary sources like oily fish."

On Twitter, users had a good time predicting the possible outrage white supremacists might have over this revelation.