6 states that could pass marijuana initiatives this year

If marijuana initiatives can make the ballot, they are likely to win 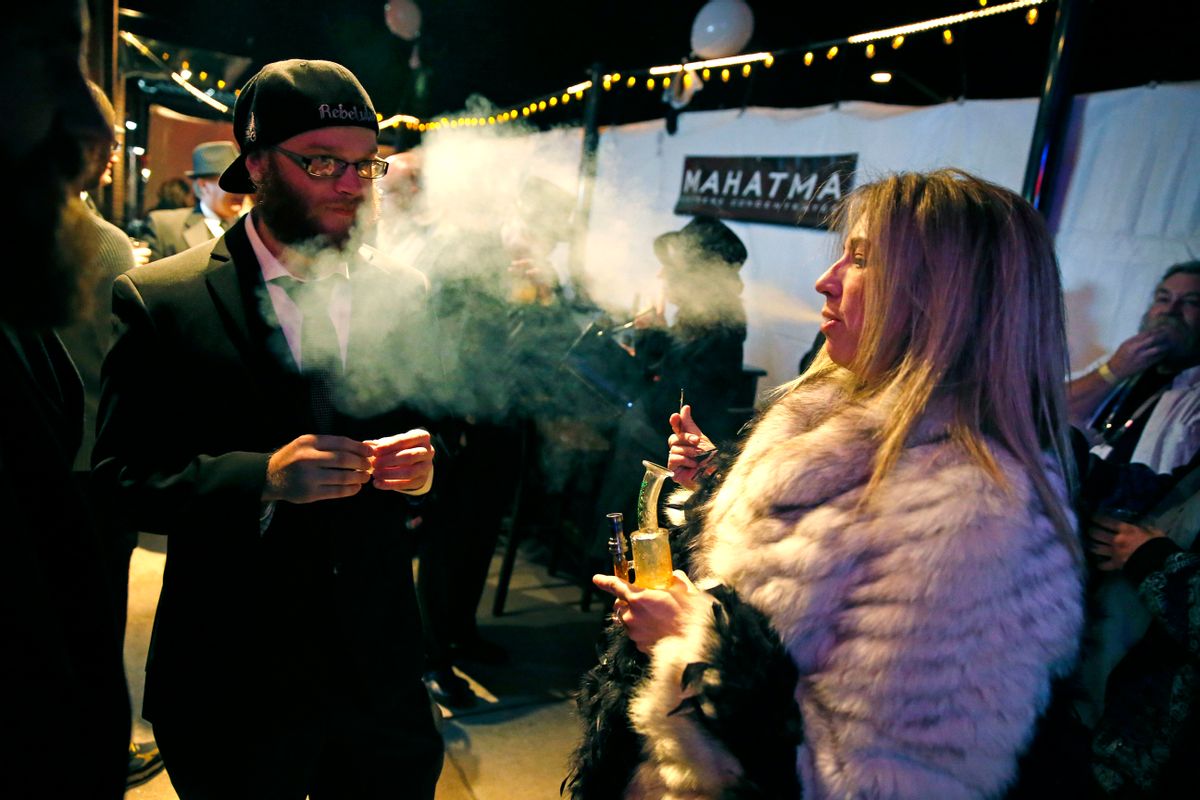 FILE - In this Dec. 31, 2013 file photo, partygoers smoke marijuana during a Prohibition-era themed New Year's Eve invite-only party celebrating the start of retail pot sales, at a bar in Denver. Colorado is on the brink of becoming the first state with licensed pot clubs. Denver officials are working on regulations to open a one-year pilot of bring-your-own marijuana clubs. (AP Photo/Brennan Linsley, File) (AP)
--

While marijuana reform efforts continue at an excruciatingly slow pace in state legislatures (Vermont became the first state to free the weed at the statehouse just last month), the initiative and referendum process continues to serve as a direct popular vote alternative to the crapshoot that is trying to get a pot bill through two houses and signed by a governor.

By the time we get past election day, we should be looking at a legalization victory in at least one more state and medical marijuana victories damned near anywhere an initiative manages to get on the ballot. In the last election cycle, marijuana reform initiatives won in eight out of nine contests.

The Michigan Coalition to Regulate Marijuana Like Alcohol has already completed a petition campaign and handed in more than 365,000 raw signaturesin November for its legalization initiative. It hasn't officially qualified for the ballot yet, but it only needs 250,000 valid voter signatures to do so, meaning it has a rather substantial cushion. If the measure makes the ballot, it should win. There is the little matter of actually campaigning to pass the initiative, which should require one or two million dollars for TV ad buys and other get-out-the-vote efforts, but with the Marijuana Policy Project on board and some deep-pocketed local interests as well, the money should be there. The voters already are there: Polling has shown majority support for legalization for several years now, always trending up, and most recently hitting 58% in a May Marketing Resource Group poll.

New Approach Missouri's Right to Medical Marijuana initiative would legalize the use of medical marijuana for specified medical conditions and create a system of taxed and regulated medical marijuana cultivation, distribution, and sales. The campaign is well into its signature-gathering phase and reported this week that it already has 175,000 raw signatures. It only needs 160,000 verified valid voter signatures, but has set a goal of 280,000 raw signatures to provide a comfortable cushion. Signature gathering doesn't end until May 6. There is no recent state polling on the issue, but medical marijuana typically polls above 80% nationally.

The Land of Enchantment has a unique path to a popular vote on marijuana legalization: A measure before the legislature, Senate Joint Resolution 4, would, if approved, take the issue directly to the voters in November. New Mexicans would vote on a constitutional amendment to legalize weed, and if they approved it, the legislature would meet next year to promulgate rules and regulations. The measure passed one Senate committee on Friday, but still faces another Senate committee vote, a Senate floor vote, and action in the House, and the clock is ticking. Supporters have only about two weeks to move this bill before the session ends. If it can get before the voters, it could win: A poll last week had support at 61%.

Responsible Ohio tried to legalize marijuana in 2015 via a "pay to play" initiative that would have created a growers' oligopoly limited to cash-heavy early supporters who financed the entire campaign. Ohio voters didn't buy that, so some of the players are back again with what they're calling the Regulate Marijuana Like Alcohol Amendment. It hasn't been officially filed yet, but would reportedly have a "free market" approach to a system of taxed and regulated cultivation, distribution, and sales, and it would allow for personal cultivation. Organizers say they have $3 million already for signature gathering and campaigning. They will need 305,592 valid voter signatures and they have a goal of July 4 for getting them. There's no recent polling.

The Oklahoma medical marijuana initiative, State Question 788, has already qualified for the ballot and will go before the voters during the June 26 primary election. The initiative legalizes the use, cultivation and distribution of medical marijuana to qualified patients. A January Sooner poll had support at 62%, a fairly low level of support for medical marijuana, which typically polls above 80% nationwide. But this is Oklahoma.

The Utah Medical Cannabis Act would allow patients with certain qualifying conditions to use medical marijuana. It limits the numbers of dispensaries and growers, and patients could only grow their own if they reside more than 100 miles from the nearest dispensary. Patients could not smoke their medicine, but they could vaporize it. The Utah Patients Coalition is currently in the midst of its signature-gathering campaign. It needs 113,000 verified voter signatures by April 15, and it has the money in the bank, including $100,000 from the Marijuana Policy Project, to get it done. A series of polls last year had support levels ranging from 69% to 78%.