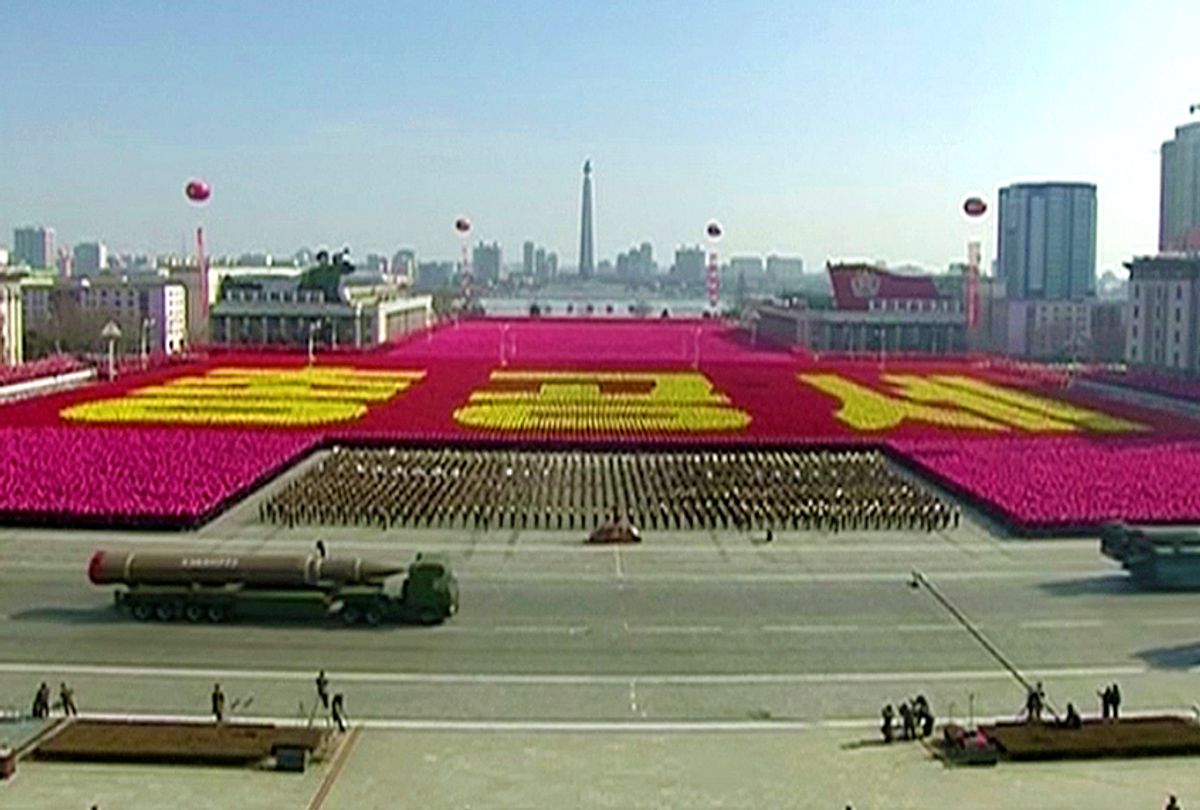 On Thursday, the eve of the PyeongChang Winter Olympics, North Korea held a military parade in Pyongyang's Kim Il-sung Square, drawing questions over its timing. This comes just weeks after North and South Korea made the decision to march under a unified flag, and amid ongoing nuclear tensions in the region.

However suspect it looks, the parade had been scheduled for weeks. North Korea announced last month that it would host a massive celebration to mark the 70th anniversary of the nation's military, the Associated Press reported. The demonstration was somewhat smaller than recent military parades under the Kim Jong-un regime, including last April's.

Rather than being broadcasted live, the parade was edited and aired on North Korean television hours later, which suggests a lower profile was intended, the AP reported. A South Korean government official said tens of thousands of North Koreans either participated or attended. It was also shorter in length "and featured fewer missiles than the previous one, which was held in April last year and unveiled five new kinds of missiles."

During his address at the parade, Kim turned his attention to his ongoing feud with the United States, saying the event was an example of how North Korea has emerged as a "global military power" even while under the "worst sanctions," the AP reported.

The move could be received in Washington as an escalation of tensions but has not yet been addressed by President Donald Trump or his administration. The timing, regardless of when it was scheduled, has raised eyebrows, given that the North and South have orchestrated a combined appearance at the Olympics and will field at least one joint team there (women's ice hockey).

It was recently announced that Kim's sister, Kim Yo-jong, would represent North Korea at the games and attend the opening ceremony on Friday. In another historic development, Kim's sister will attend a lunch with South Korean President Moon Jae-in. This is the first time a member of the Kim dynasty will enter the South since the Korean War.

Meanwhile, Vice President Mike Pence has vowed to shut down any attempt to normalize North Korea during the Olympic games. An aide close to Pence reportedly said, "The Vice President will remind the world that everything the North Koreans do at the Olympics is a charade to cover up the fact that they are the most tyrannical and oppressive regime on the planet."

The aide continued, "At every opportunity, the V.P. will point out the reality of the oppression in North Korea by a regime that has enslaved its people. We will not allow North Korea’s propaganda to hijack the messaging of the Olympics."

Incidentally, Trump has asked the Pentagon to put on a military parade of its own in recent days.