"That makes no sense in a democracy”: Pennsylvanians weigh in on redistricting 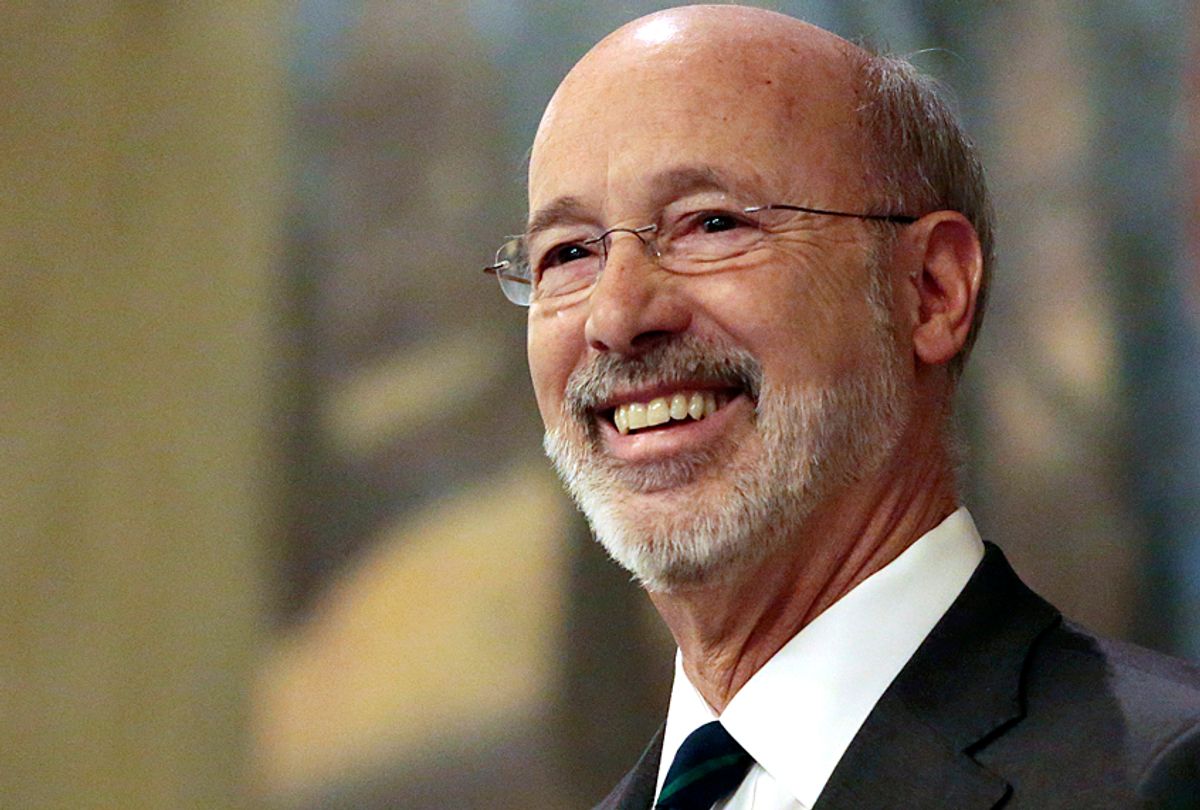 With a map of Pennsylvania’s gerrymandered districts displayed on a 90-inch flat screen above his head, Gov. Tom Wolf, a Democrat, heard local residents’ concerns about redrawing the state’s Congressional map.

“This is our chance to get it right,” Wolf told the crowd of 75 on February 1 at Point Park University in Pittsburgh, his third stop in three days on his ongoing “listening tour of the state.”

In January, the Pennsylvania Supreme Court ruled the current map (from 2011) unconstitutional and ordered the legislature to submit new iterations by February 9. Wolf must approve a new map by February 15. If he disapproves, the court will decide Pennsylvania’s districts for its 18 U.S. House seats. The new map would be used for Pennsylvania’s April primary. Pennsylvania Republican senators sought a stay on the state’s Supreme Court decision, but the U.S. Supreme Court denied their attempt on February 5. The story then swiftly took another turn when State Rep. Cris Dush called for the five state Supreme Court justices to be impeached.

Residents and panelists at Wolf's Pittsburgh event highlighted issues of fairness and transparency in drawing news lines and urged the governor to consider those points when new district options reach his desk this month. In all, the governor took five audience comments during the one-hour event.

“I don’t know what data points were used to make this map,” Ramona Nelson, 74, of McCandless, a town 12 miles north of Pittsburgh, said to the governor. “These maps, they have to be translated for the general public so they can understand.”

Panelist Suzanne Broughton, of Fair Districts PA, an arm of the League of Women Voters of Pennsylvania, highlighted the oft-cited, oddly shaped “Goofy kicking Donald Duck” district in Eastern Pennsylvania, and criticized the sprawling districts on the Western side of the state.

“In 2001, District 12, which had been a reasonably compact district, was horribly contorted and stretched . . . to set up a primary contest between incumbents living miles apart,” she said. “Ten years later in 2011, the district was completely rearranged to set up another such primary contest. This is gerrymandering, Western Pennsylvania style.”

Broughton’s organization is advocating for state House bill 722 and Senate bill 22, which would establish an independent commission to redraw district lines.

Nathan Firestone, a political science professor at the university who sat on the panel, said that incumbents being re-elected in Pennsylvania happens more than 90 percent of the time, “and that makes no sense in a democracy.”

“In a lot of districts, [elections] are over at the primaries,” said panelist Micah Sims, executive director for the government-reform advocacy organization Common Cause Pennsylvania. “I don't know how fair that is in a democracy because in reality that just eliminated the need to have a general election.”

He urged the legislature and governor to take into consideration “racial and gender equality” as well as “geography, compactness and contiguity” when deciding on new maps.

When pressed on what his vision of fairness is, Wolf said, “It’s a very subjective thing. As you can understand what is fair in the eyes of maybe a very partisan person on one side of the aisle might be very different from what fairness is to somebody else from a very different vantage point. I’m trying to find out what people who don’t have a vested interest in a specific short-term goal, ‘What do you think fairness is?’, and that’s why I think these listening tours are very important.”

According to Jonathan Marks, Pennsylvania Department of State commissioner of elections, the new district map will not affect the April primary date.