Surge in alt-right violence: At least 43 murders in the last four years

It's not just Charlottesville: Self-radicalizing young white men are killing people at an alarming rate 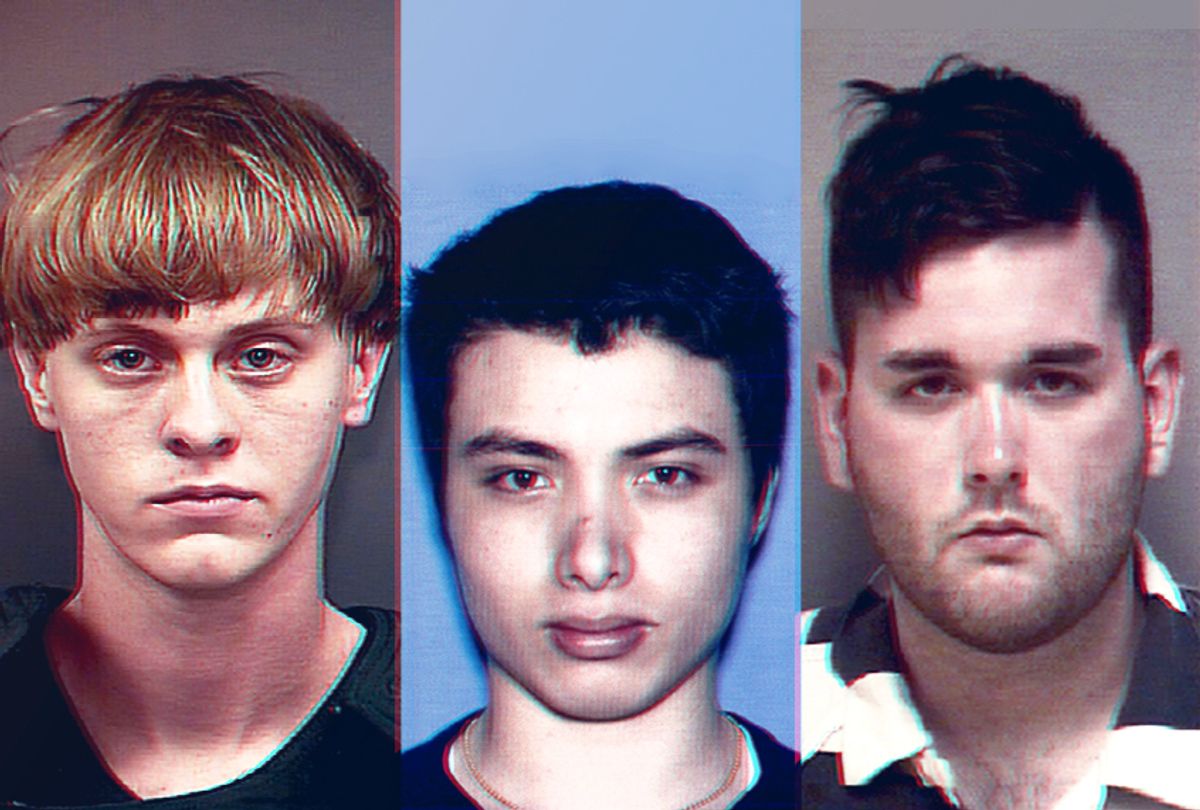 Last August's "Unite the Right" rally in Charlottesville, Virginia, which started with a torchlit mob chanting racist slogans and ended with an far-right activist murdering an anti-racist protester, galvanized national attention toward the growing problem of white nationalists organizing under a new branding term, the "alt-right." The death of Heather Heyer after a young white nationalist named James Alex Fields slammed his car into a crowd drove home that the alt-right wasn't just a bunch of douchebags playing Nazi on the internet, but a serious phenomenon that could include deadly violence.

Unfortunately, as a recent report from the Southern Poverty Law Center (SPLC) entitled "The Alt-Right Is Killing People" makes clear, Heyer's death was not an isolated phenomenon. By their estimates, she was the 37th person murdered by someone apparently fueld by alt-right ideology in the past four years. Since Heyer's death, six more people have been killed by alt-right extremists, bringing the total to 43. That same increase in violence has included 67 injuries, including the 19 other people Fields hit with his car in Charlottesville.

“There is this subset of young white men that is radicalizing, and I think a lot of that has to do with perceived status and their own life outcomes," SPLC researcher Keegan Hankes told Salon. Such "disaffected" young men, he said, "are who we are seeing go on to commit these acts."

What makes a murderer a part of the alt-right? As Hankes explained, that's often tough to pin down. White supremacists and other alt-right activists "purposefully leave their ideology with fuzzy boundaries," leaving the question of "who’s included and who’s not" deliberately vague. In part this is to create "plausible deniability" if and when alt-right adherents do commit acts of violence. The alt-right movement is "purposefully sprawling," Hankes said, spread out over various sites and social media platforms, channeled through a variety of figureheads, and rejecting more centralized or coherent organizing strategies.

To cut through this uncertainty, SPLC researchers focused on a specific profile: Young white men who have radicalized themselves, usually through the internet. In most cases this means engaging with online propaganda that tells young men or teenage boys that their romantic, social and employment problems are the fault of "social justice warriors" and "political correctness," rather than bad luck or their personal failings. These young men are encouraged to lash out at women and people of color, primarily through online trolling. A few of them, perhaps inevitably, start hungering to do more serious damage in the real world.

The researchers traced this violent trend back to Elliot Rodger, a young man who killed seven people and wounded 14 in a 2014 rampage through Isla Vista, California, before killing himself. Rodger's explicit motivation was to seek revenge against women who had supposedly rejected him sexually, though his first three victims were his male roommates. He had spent a great deal of time on misogynist forums that routinely peddle the idea that feminism has ruined dating and sex for men.

The alt-right is associated more closely with white supremacy than misogyny, but as Hankes explained it, misogyny is "a through-line through the whole ideology" and the alt-right community holds "a general distaste for gender egalitarianism." In fact, alt-right leaders target online forums where young men gather to demonize women and exchange "pick-up artist" tips, using misogyny as the bait to lure young men into a white nationalist ideology. Baiting angry young white men with the idea that men of color are "stealing" all the white women — and that's why they can't get a date — is a common tactic.

It's also an idea that showed up in Rodger's 17,000-word manifesto, in which he wrote, “How could an inferior, ugly black boy be able to get a white girl and not me?" His alt-right fans have seized onto this passage and used it to build up their claim that interracial dating and marriage is tantamount to "white genocide."

Some of the murders on the SPLC's list, such as Dylann Roof's June 2015 mass killing of nine people in an African-American church in South Carolina, have become the focus of massive media attention. Others, such as 21-year-old William Edward Atchison's murder of two students at a New Mexico high school in December 2017, have received relatively little. But they largely fit the pattern: Angry young men who took their grievances to online forums to self-radicalize and then lashed out violently in the real world.

Asked if this pattern resembles the way that Islamic terrorist groups like ISIS work, Hankes agreed, but emphasized differences in how social media networks and web server hosts have reacted to the alt-right. He noted that "several of the big social media companies" manage to get most ISIS propaganda taken down "before it’s even posted to the public." Generally speaking, the alt-right "have been given more leash and have more free range on these platforms."

Last summer's fiasco in Charlottesville, Hankes added, is an example of what alt-right organizers were able to accomplish online: For "so many of those individuals, this was their first rally that they had ever attended. Many of them came from all the way across the country."

To be clear, these young men should not be seen as mindless ciphers who simply absorb a bunch of right wing memes and rants on Reddit and come out the other side delivering heil-Hitler salutes and committing violent crimes. The alt-right is a true grassroots movement, formed from thousands of disparate young white men telling each other, over the years, that people of color and women are to blame for their problems. It's a movement many years in the making -- that got a huge shot in the arm from the presidential campaign of Donald Trump.

Trump "puts so much wind in the sails of these guys," Hankes explained. "The disregard for so-called political correctness, this willingness to talk about taboo ideas, this willingness to dog-whistle or make outright racist or xenophobic remarks" all allowed young converts to alt-right ideology to believe they could "actually go make real things in the world happen."

It's likely no coincidence, then, that the pattern of killings escalated after Trump's election. Of the 13 separate violent incidents catalogued by the SPLC, 10 of them came in 2017. While the negative publicity resulting from the Charlottesville rally has unquestionably disrupted the alt-right's rise, the bad press is also making its adherents angrier and more aggrieved. That is unlikely to lead to less violence in the future.