Catching a glimpse of "the black tech renaissance" 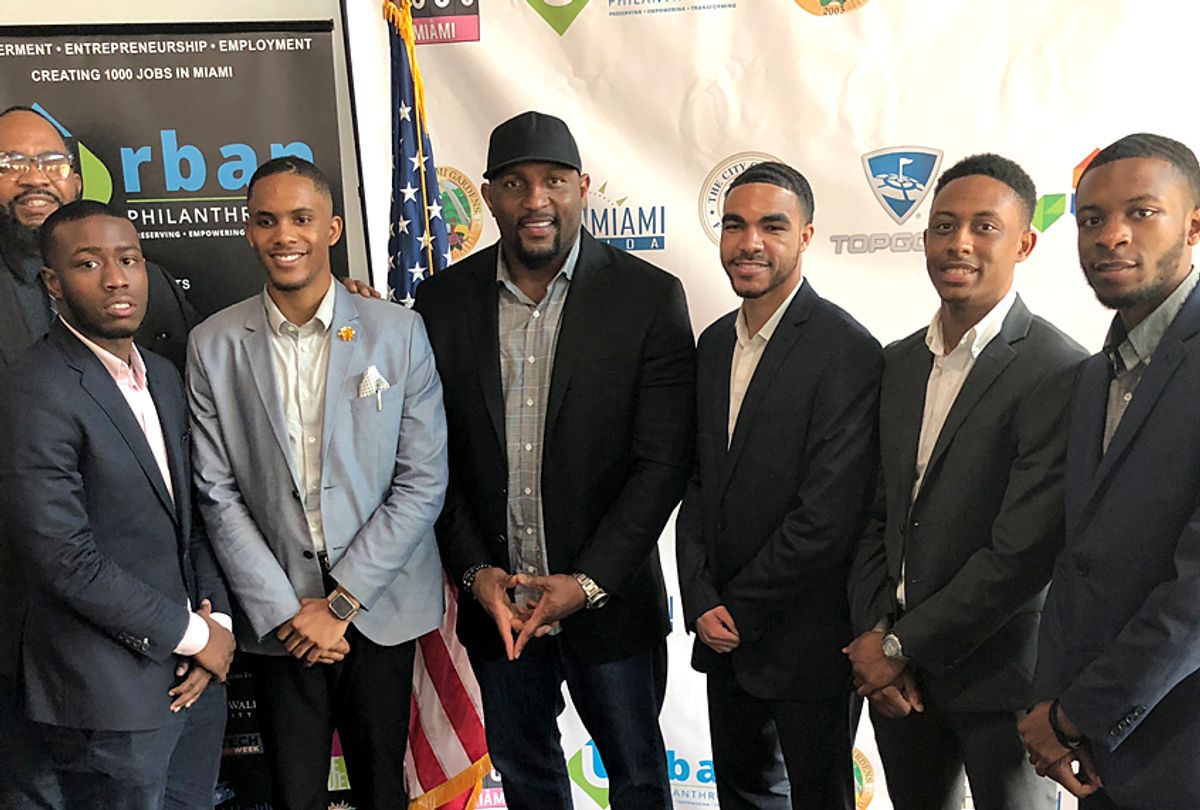 Lance Lucas (Courtesy of the Author)
--

People who know me know I always arrive early — extra early. And this week, we were up really early — we had a 6 a.m. flight down to Miami for BlackTech Week.

Founded in 2014, BlackTech Week is a minority-focused ecosystem-building festival, with speakers and pitch competitions, that brings founders, corporations, investors, entrepreneurs, tech workers and innovators together for six days every year.

Lucas describes it as “the genesis of the cultivation of black technology."

"It’s the single most important event for technologists in America,” he told me.

Lucas rolled up to the airline gate in a Malcolm X-style fedora, holding two cups of coffee. As passionate as he is tall, he started spitting out new ideas by the millisecond. Cybersecurity, drones, new devices, the problems with bitcoin, what we should be focusing on versus what’s being focused on — and on and on. He’s an automatic weapon, loaded with information, and has 10 or 20 extra clips of knowledge laying around at all times.

I meet him at a conference back in 2015. We had both won BMe Genius fellowships, and he was a featured speaker. That's when Lucas told me all about his Laptops for Guns program­: a yearly event where anyone can bring in a gun from the streets and trade it for a brand-new laptop and tablet or desktop computer. Cops attend, but no one gets arrested. “You pass in your pistol,” Lucas explained. “And then get to freely walk out the door if you want.”

“The gun exchange is only to get the community excited," he added. "My program does way more.”

I attended Laptops for Guns in Baltimore that year and found it extremely inspiring. Then Lucas showed me where the real change lies — in the network certifications he teaches to participants for free.

“They’re coming for the laptops, but I’m gonna school them on making more through these certifications,” he told me. “I really think we can use technology to end systemic poverty. I have the cure and it’s through technology-driven education.”

Out of the 100 people enrolled in a municipal workforce development program in Maryland that Lucas runs to retrain unemployed workers, 62 found jobs and escaped poverty. Some of his old students have gone on to work for Google and the Department of Defense.

Since then, Lucas has been growing his initiatives, establishing offices and free trainings in Washington, D.C.; Miami and New Orleans. Lance founded the Cyber Warriors Diversity Program, a partnership between his company, Digit-All City, and Northrop Grumman, through the Depart of Defense mentor-protégé agreement. To date, the program has trained roughly 10,000 people and has led to employment for approximately 70 percent of his certified students.

On the plane ride to BlackTech Week, Lucas told me about his newest venture with Cyber Warriors: to "develop a cyber security program for every HBCU in the state of Maryland.”

“I worked with Senator Barbara Robinson on developing the bill" that will fund the program, Lucas said. "She reps West Baltimore and understands what our young people need to be successful.”

The bill has three parts. First, it will fund a Cyber Warrior conference to facilitate national efforts to diversify the field. According to Lucas, and the Department of Labor statistics, only 2 percent of African-Americans are employed in the cybersecurity field. He feels this opportunity can create many jobs in oppressed communities. The second part will follow student participants for three years after they are certified so that their successes can be tracked, published and used for the creation of further opportunities. And the third part will provide free supplies and training — something Lucas has already been doing in troubled communities throughout the county.

In Miami, we met up with a group of his Cyber Warriors. The young Morgan State University students jumped off their plane and were coding in their Lyft, into the house Lucas rented, and all the way up to our first event. I never saw a group of more motivated and hardworking young people, I thought, as they clicked away on their laptops, barely pulling their faces away from the computer screens.

I asked one Cyber Warrior, Jayrell Cephas, 21, for his thoughts on BlackTech Week. “This is one of many necessary events to tackle one obstacle: African-Americans are underrepresented in STEM [and] technology fields," he said. "It also gives the minority youth hope that success in this field of study is possible. And where I’m from, hope is all we have”

Fellow coder Charles Love III agreed with Cephas. “In a critical period in time, on the most beautiful month of the year, I'm grateful for the opportunity to see just a glimpse of the black tech Renaissance," he said. "Being in attendance alone is humbling. It's exciting to see several generations of wisdom given, received and put to use to further our progression as a people.”

During BlackTech Week, the Cyber Warriors will be attending events that place them closer to their dreams, and they will pitch ideas to some of the wealthiest companies in the world. Lucas has taught them that fighting for opportunity is only half of the battle; earning those opportunities and then sharing them with others is what it’s all about. That, along with their hard work, will guarantee their success. I can’t wait to watch them work.