After a series of 2017 disasters, hospitals gear up to be more prepared 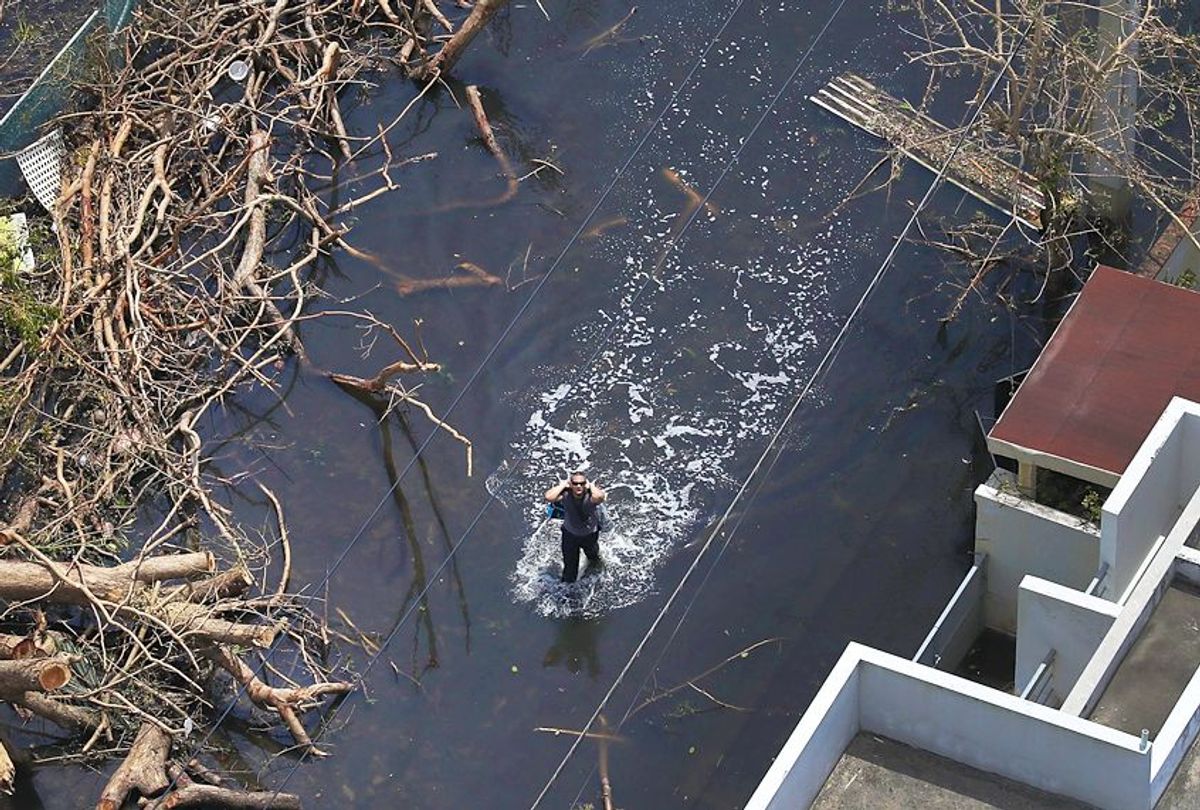 A man stands in a flooded street in the aftermath of Hurricane Maria in San Juan, Puerto Rico (Getty/Joe Raedle)
--

It was 3:35 a.m. and flames from a massive Northern California wildfire licked at the back of a Santa Rosa hospital.

Within three hours, staffers evacuated 122 patients to other facilities — something they’d never come close to doing before. Ambulances sped off with some of the sickest patients; city buses picked up many of the rest.

With phone lines charred and communication restricted, doctors and nurses struggled to figure out who was sent where — forced to keep their wits even as some of their own homes burned and their families fled.

This was not exactly covered in their meticulously executed drills and disaster-preparedness videos.

“You never know how you’ll react until it comes your way … until fate taps you on the shoulder,” said Dr. Josh Weil, an emergency medicine physician at Kaiser Permanente in Santa Rosa who led the hospital evacuation operation on Oct. 9.

America’s hospitals were beset by an unusual number of calamities in 2017: The fires that raged in Northern and Southern California; hurricanes that displaced thousands in Houston, Florida and Puerto Rico; the deadliest mass shooting in modern history that killed 58 people and wounded more than 500 others in Las Vegas; and the attack at a Bronx hospital in which a doctor turned a gun on his former colleagues, killing one and injuring six.

Across the country, natural disasters have become more frequent and more deadly; the carnage from mass shootings resembles that on a battlefield. In some cases, these crises are more severe and elaborate than most hospitals — particularly smaller ones — are prepared for, and experts say it is time to bring facilities up to speed.

“The probability that any individual hospital will be involved in an unusual event is increasing,” said Dr. Carl Schultz, professor emeritus of emergency medicine and public health at the University of California-Irvine. “All hospitals are potentially vulnerable,” he said, and “there is more pressure for hospitals to be prepared.”

That’s the case, he added, even though hospitals often lack the resources and funding to upgrade their disaster plans.

In the new year, hospitals that responded to outsized tragedies in 2017 are reassessing their plans in light of their painful experiences. Below are some instructive examples:

In Northern California, staffers from the Kaiser hospital in Santa Rosa rushed to clear out their wards as the ferocious Tubbs Fire approached. (Kaiser Health News, which produces California Healthline, is not affiliated with Kaiser Permanente.)

The original plan was to jot down details from each displaced patient’s identification bracelet so that the hospital could later confirm that patients arrived at other hospitals safely. But with the fire coming fast upon them, it became clear this would take too long, Weil said.

On the fly, one staffer suggested taking photos of patient wristbands with smartphones, he said.

“That was a brilliant idea that really saved us,” Weil said.

The hospital is now considering whether smartphones might be of greater use in future emergencies, or if there’s a more efficient way to track patients who must be rapidly whisked away.

Eight days earlier, another tracking issue surfaced at Sunrise Hospital & Medical Center in Las Vegas — this one concerning incoming patients. The facility was suddenly inundated by people shot or otherwise injured during the tragedy at the outdoor country music festival; 212 patients were admitted in a two-hour window, 124 of them with gunshot wounds.

Of those, 92 had no official photo identification on them.

Families dashed desperately from one hospital to another searching for their loved ones, said Alan Keesee, the hospital’s chief operations officer. Without IDs for patients, it was a challenge to confirm whether they were at the hospital, let alone whether they would be OK.

Enterprising staffers listed their unidentified patients’ physical traits and unique features, such as tattoos, to help match people with the descriptions family members provided. In turn, many relatives pulled up social media profile photos of their loved ones to give the hospital something to go by.

The chaotic process of patient identification exposed a desperate need for a centralized data hub where descriptions of unidentified patients in a massive emergency could be uploaded and accessed by all area hospitals, Keesee said.

And indeed, he said, his hospital is working with the Nevada Hospital Association and other local health agencies to determine whether the hub can be created.

Staff members had trained for just this kind of incident. But they had not anticipated how restricted their movements would be once police took over, said Dr. Sridhar Chilimuri, the physician-in-chief that day.

“Shooting victims need blood transfusions, so you need to get from the blood bank to the operating rooms quickly,” Chilimuri said.

But the hospital lockdown blocked access to elevators. Doctors and nurses also had to fetch surgical instruments and move patients, he added, but they couldn’t do so without approval from police.

Because it was an internal shooting, police had to clear staffers of suspicion before they could return to work — even the doctors needed for lifesaving operations.

The hospital has since updated its drills to include an accelerated process of police screening — targeting the medical staff most urgently needed — and its training videos now show an attacker armed with an assault weapon rather than a small handgun.

“Hopefully that will help us cut down on the time we are crippled,” Chilimuri said.

When Hurricane Irma barreled into South Florida in September, the 10 Tenet Health hospitals in the region felt ready.

They had beefed up their disaster plans after Hurricane Matthew landed a year earlier, said Cathy Philpott, a director of nursing practice and clinical operation for the hospital system. They also brought in staff from other states and rolled in backup generators, she said.

Even so, they faced an unexpected challenge: a shortage of platelets, cells that help the body form clots to stop bleeding.

“That’s the lesson learned,” she said.