Kim Jong-un's sister and the South Korean president have lunch, while Mike Pence rattles the sabers ever louder 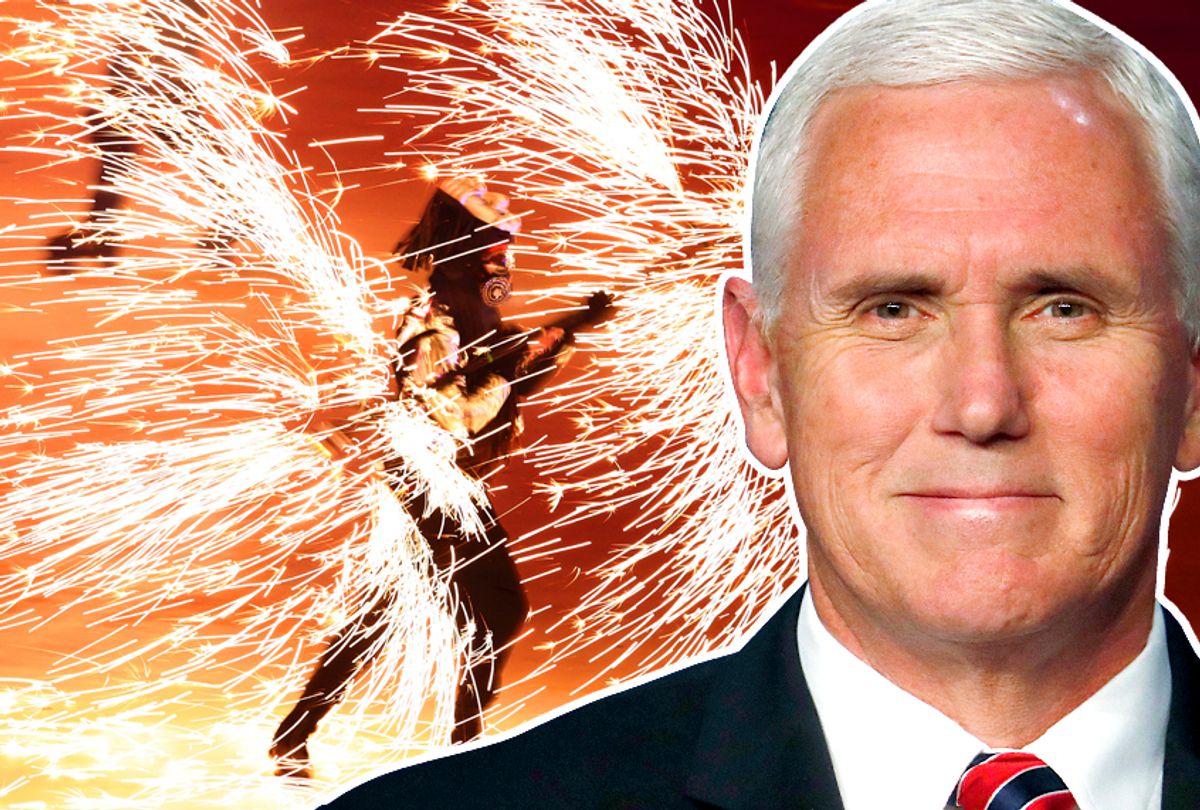 I am not much for corporate athletics. Too much money has ruined one sport after another, and the Olympic Games were marketized long, long ago. Incessant ads for cars, beer and razors repel me at this point. Politics and sports is another matter. Remember the Sino–U.S. "ping pong diplomacy" of the 1970s? Soccer matches have done their work over the years, too. So I will watch the Winter Games that opened Friday in Pyeongchang, South Korea, with the keenest interest. I do not care who wins what, although it would be a kick if the North–South women’s hockey team took home a medal. (Where would they take it, actually?)

How far can Seoul and Pyongyang carry this new Olympic diplomacy? This is the big question now. There have been stumbles since President Moon Jae-in’s administration in South Korea agreed with Kim Jong-un’s North Korean government to join forces at the Winter Games, but these have been minor. Earlier last week Pyongyang announced that Kim Yo-jong, the North Korean leader's influential sister, would be in the North’s delegation in Pyeongchang. On Saturday, Moon took her to lunch — during which Kim Yo-jong reportedly handed him a letter from her brother, inviting the South Korean president to a summit in Pyongyang. Early press reports suggested Moon is inclined to accept. Conclusion: The politics of figure skating and downhill slalom are getting very serious very fast. If a North–South summit is scheduled, Washington’s isolation on the Korean question will be (1) boldly obvious and (2) of unpredictable, potentially volatile consequence.

You have to want this effort across the 38th parallel to succeed. Few readers of this column have spent a day of their lives without one or another degree of nerve-wracking tension in Northeast Asia, and it is currently worse than it has been for decades. A remedial process with potentially substantial results is now possible. Look and you will see it in the middle distance.

But you have to look carefully, as other things are also possible. And you have to ask other questions too.

Vice President Mike Pence made a remarkable trip to Northeast Asia last week. The timing, on the very eve of the Pyeongchang games, seems to me unmistakable. So was his purpose.

In Tokyo on Wednesday, just two days before the opening ceremony in Pyeongchang, Pence promised yet another set of unilateral sanctions against North Korea — these after a previous set not three weeks old. “I’m announcing that the United States of America will soon unveil the toughest and most aggressive round of economic sanctions on North Korea ever,” the vice president stated, “and we will continue to isolate North Korea until it abandons its nuclear and ballistic missile programs once and for all.”

Do not miss the key phrases here: Washington’s intent remains to isolate, and it is difficult to see how Pence could have conveyed disrespect for Moon Jae-in’s efforts with any more hostility than this. Once and for all: Is there any need to interpolate this inexcusable utterance?

Readers will understand this remark as easily as I do, I assume. The U.S. has cultivated dehumanizing, paranoid, often ridiculous representations of North Korea for nearly 70 years, and among Americans they are more or less universally accepted. There is to be no tampering with them now. No letup in the hatred no matter what happens in Pyeongchang, Pence as much as said.

Where do you think our great country stands on the question of peace in Northeast Asia?

I would like to add one other recent development to those just noted before suggesting other questions we ought to be asking.

We learned last week that the Trump administration intends to propose a record defense budget of $716 billion for the 2019 fiscal year, which begins next Oct. 1. This will mark a 7.2 percent increase over the previous year, which — same old story — saw a substantial increase over the year prior. Note: These are base budget figures. By many analysts’ reckonings, the true figure for U.S. military expenditure, including all hidden costs, is probably somewhere on either side of $1 trillion annually.

While we learned this, we also learned that the Defense Logistics Agency, the only branch of the Pentagon ever to submit to an outside audit, lost $800 million in expenditures in the 2016 fiscal year and could supply Ernst & Young, the auditing firm, no reliable account of how it deploys its $40 billion tranche of the Pentagon budget. I marvel at how long it took me to dig up these numbers. They are around but not so easily located. They were on nobody’s front page where they belonged, you may have noticed.

Defense Secretary Jim Mattis had a remark on the fiscal-year 2019 budget allotment that was, literally, straight out of the history books. “Our competitive edge has eroded in every domain of warfare — air and sea, space and cyberspace — and is continuing to erode,” the Secdef said. The echoes of that statement reverberate in my memory all the way back to the 1950s, and I can recall no occasion when any such assertion was questioned. This iteration was not an exception.

What are we watching here, readers? What are we hearing? I have four answers, at least for the time being.

First, we can discard all assertions in the American press that Moon, the South Korean president, had suddenly turned hostile toward the North in conformity with U.S. policy after his election last May. Shame on the many correspondents, some of whom I know and thought better of, who floated this line. Moon made statements to this effect, and he is not a reckless leader given to excessive idealism. But he was parrying Washington — and possibly his own military — as he went to work on his plans for a negotiated settlement on the peninsula. We now know these plans were set in motion last June, a month after Moon moved into the Blue House, South Korea’s presidential palace. Moon’s dedication is not to be questioned. Given the nature of the bilateral relationship, it takes considerable courage for a South Korean leader to set himself decisively against Washington’s policy preferences. Moon did so when he lunched with Kim Yo-jong on Saturday — and will do so again in spades if he agrees to summit with Kim jong-un. One imagines the move may not be risk-free.

Second, there is as of now no evident intention in Washington to approach the negotiating table, as all other nations traditionally involved in the Korean crisis urge. This appears to hold true under any circumstances. The format that presents itself as the most logical is the six-party procedure already used by these nations. It put North Korea on one side of the table and South Korea, the U.S., Japan, China and Russia on the other. If the Pyeongchang Games go well enough to produce a more explicitly political step toward détente, we had better brace ourselves for what Washington, at that point exposed as the odd man out, will do to foil further progress. My conclusion here: War is by no means off the table.

Third, in view of Pence’s remarks in Tokyo and Seoul, we must conclude that there are no moderating voices on foreign policy left in the Trump administration — to the extent, I mean, that there may have been any from the beginning. There had been intermittent suggestions that tempering perspectives in the executive were keeping things at least minimally civilized. Read Pence’s remarks and imagine they were uttered by Mattis or H.R. McMaster, Trump’s ever-belligerent national security adviser; either of the other two could have made those statements verbatim. By all appearances, these figures are now interchangeable. In short, the military runs the White House on the foreign policy side — this without any inhibiting pressure one can detect from other quarters.

My final point is a corollary of the previous, and I consider it the gravest. Put these recent developments side by side, and the following is what you see.

Americans have talked ad infinitum about the military-industrial complex since Dwight Eisenhower advised us of its existence in his farewell address, 50-odd years ago. But it has remained a kind of abstraction. Nothing serious has been done even to check it, to say nothing of dismantling it. It has, indeed, elaborated into the military-industrial-intelligence complex, and we are on the brink of adding “media” to the list.

The Korea crisis as we now have it puts us on notice: We are in danger of entrapment in a world wherein there is no escape from disorder and conflict. Sooner or later, all the Americans reading this column will have to face the totality of the military-industrial-intel complex’s grip on our national direction. Ostrich time is over. Let us hope for the best, but the Korea situation could easily tip over into a graphic example of why.