A dance with Parkinson's: Patients find movement and meaning through dance therapy 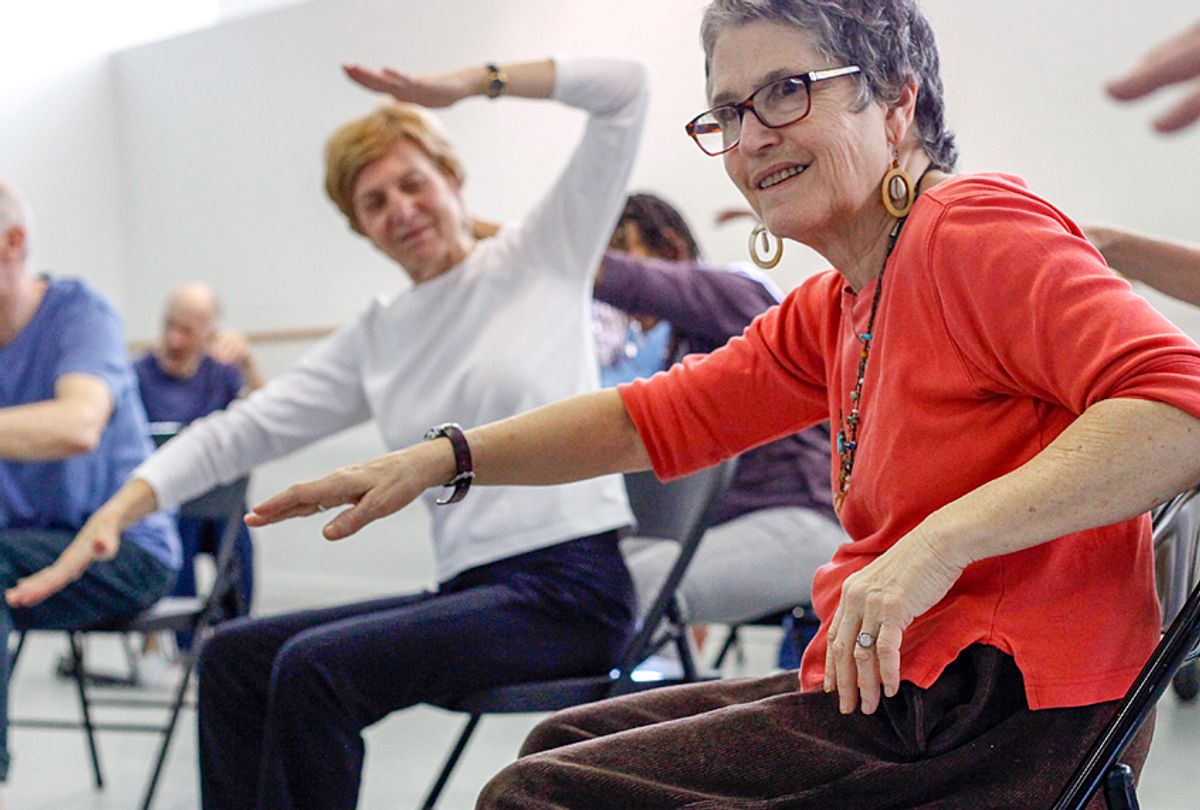 Wheelchairs and walkers lined the walls of the studio and circles of folding chairs orbited from the center of the room. Some people dressed in sweatpants, others wore button-up shirts and khakis. Some smiled and greeted each other by name. Others stretched. This was a dance class, though every student here had been diagnosed with Parkinson's disease.

Dunham Smiley, 63, and his wife of 35 years, Eileen, who is also his primary caretaker, sat in the outermost circle following instructor David Leventhal intensely. A former Mark Morris Dancer, he is also co-founder of Dance for PD, the free community dance program designed for people with Parkinson's that began 16 years ago at this very studio in Brooklyn, and today has expanded to 250 communities in 25 countries.

In one of the first exercises, Leventhal instructed the class to maintain eye contact with their hand as they moved it any way they desired. Some students made shapes while keeping their eyes sharp. Others glided their hand around them in a quality that was more fluid. Smiley's hand fluttered, almost bee-like, his tremor becoming part of the dance.

Smiley was diagnosed with Parkinson's about 10 years ago, and Dance for PD, at just four classes in, has become an important part of his treatment. It's a natural fit, too. Eileen said Smiley loved to dance socially, so much so that you "couldn’t get him out of the club unless they closed." Smiley added, "The Parkinson’s took that, it stole my rhythm." But here, he has been able to restore some of that joy and liberation. Dancing alongside his "cohort," as he calls his fellow dancers, has also helped him to accept that he's no less of a person because of his diagnosis. Smiley spent years trying to mask his symptoms. Now, he uses that energy to dance.

Dance for PD began as a collaboration between the Mark Morris Dance Group and the Brooklyn Parkinson's Group under the theory that a professional dancer's way of thinking about every aspect of movement, from its quality to its direction, duration, initiation, intent and focus, "has a corollary in what people with Parkinson’s want and need to address in managing their daily life," Leventhal said.

The neurodegenerative disorder affects as many as 10 million people globally, according to the Parkinson's Foundation. Common symptoms are tremors, slowness in movement, rigid limbs and impaired walking and balance. Many people living with Parkinson's also suffer from depression, anxiety and dementia. It's why for David Buffam, 65, a former performer and actor who was diagnosed nine years ago, remembering a long string of choreography in his Dance for PD classes is both "challenging and rewarding."

"This is my life’s blood, this group," Cyndy Gilbertson, 70, said. She's been living with Parkinson’s for 29 years, and she is a 12-year veteran of Dance for PD. "With Parkinson’s you have many times where you can’t function and it would be easier to get into a depression and withdraw and peter out," she said, "but with this group, they don’t let you do that." Buffam added, "It's a community." Even though his commute to this Brooklyn class is an hour each way, Buffam comes at least three times a week.

But the communal environment isn't just limited to those with Parkinson's. Leventhal sees a two-way street here, one that has kept him teaching and leading this program for almost two decades. "I think a lot of people in the dance community take their dancing for granted," he said, "and what I love about this group of participants is that they don’t take anything for granted. They come in each class and they’re so hungry for information."

Leventhal sees himself as more of a facilitator, one with a task in the moment, to encourage a positive and pleasurable movement experience in the 75 minutes of each class, but also to provide strategies and practices that the students can carry with them, "as a reminder that there is life beyond Parkinson’s," he said, "that they have skills and abilities that go beyond the constraints of the condition."

Each class is accompanied by a live musician and incorporates a variety of dance styles, including modern dance, ballet, tap, Flamenco and social dance, as well as singing and poetry at times. Because everyone has unique experiences with Parkinson's and the way their symptoms manifest, the classes are flexible and filled with options. Individuals can perform the exercises sitting down, standing, without using their legs or arms, and so on. There's also the option to dance with a partner or solo. Everyone is welcome to come as they are. There is also Dance for PD digital materials and Google Glass software, to allow people with Parkinson's who may not have classes in their area or aren't as mobile to participate.

Leventhal says the medical community was at first skeptical about the benefits of dance for people with Parkinson's, but after doctors began to visit the Dance for PD classes and their patients reported back, they "started to understand this is actually sophisticated motor-cognitive training and it's a social environment often not provided through a healthcare setting." Overall, Leventhal said, the program helped to dispel misconceptions about what dance training is, and medical professionals began to recognize the art form's power. Since then, there have been more than three dozen peer-reviewed studies published about the advantages of dance for people with Parkinson's. Now, Buffam says, neurologists have begun to to believe "movement is equal to medication" for those living with the condition.

But Leventhal is clear that Dance for PD isn't physical therapy. "We don’t want the class to ever become clinical or a pure therapy experience, because I think art is [that] automatically," he said. "As soon as you think of it as a dosage, that sense of creativity and expression and being part of a social community starts to go away."

In one exercise, Leventhal instructed the class to clasp their hands in a tight ball. He guided the students to slowly create space between their hands, expanding it until their arms stretched out long to each side. He then asked them to go further, until the stretch took up their entire bodies.

It seemed a physical manifestation of the way Dance for PD seeks to transform the diagnosis of Parkinson's for its participants from an ending, or something finite, to an open beginning. By the end of the class, no matter who entered the room or how they did — in wheelchairs, or with walkers, or with aides — everyone was standing, everyone was dancing.

When I asked Gilbertson if, after 12 years in this class, she felt like a dancer, she said without hesitation, "I do now."