Humanizing the border: Francisco Cantú's "The Line Becomes a River"

This haunting new memoir chronicles the writer's time as an agent on the U.S.-Mexico border 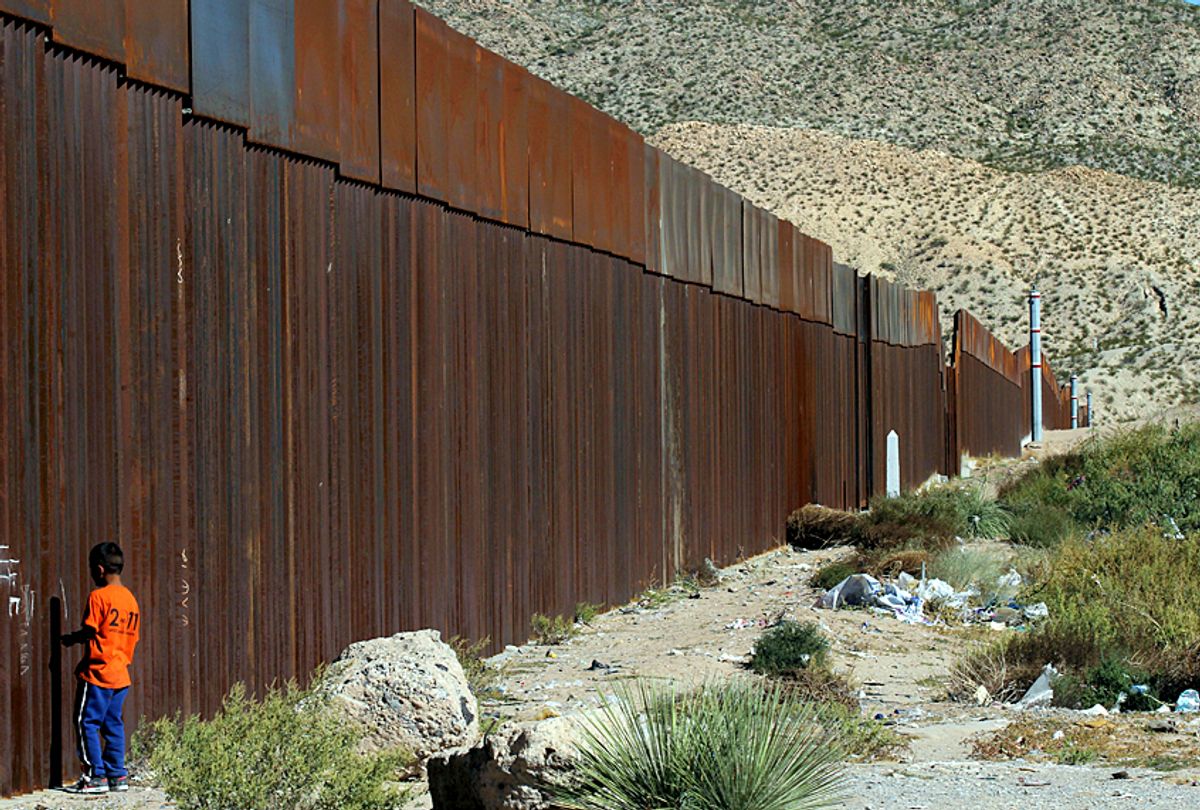 A child standing at the border wall observes the "Not Walls" demonstration by activists in the US in front of the wall that divides Ciudad Juarez, Mexico, from Sunland Park, New Mexico, on October 23, 2017. / AFP PHOTO / HERIKA MARTINEZ (Photo credit should read HERIKA MARTINEZ/AFP/Getty Images) (Getty/Herika Martinez)
--

How and why people come to the United States, what they do and how they are treated once they get here, and who they are allowed to become, is a cornerstone of the American story. Throughout the first year of Donald Trump's administration, part of that national story has been playing out through ICE raids, deportations and round-ups, and heated political standoffs over the fate of undocumented immigrants brought here as children. And since Trump began campaigning for president on the promise that he would build a wall along parts of the border between the U.S. and Mexico — and make Mexico pay for it — in order to more tightly control crossings between the two countries, the boundary line itself, walled or open, has become a hotly-debated point of interest throughout the country. Trump's now see-through wall makes the metaphor concrete: The U.S. needs to carefully control who crosses, while still keeping an eye on who is on the other side. And yet, border crossing fatalities rose in 2017, even as the number of migrants making the journey decreased, suggesting that official deterrence in the borderlands could be working only on those not desperate enough to risk the most dangerous routes or methods.

Boundaries are political and logistical constructs, but to each person who crosses, the border and their relationship to it is personal. Writer Francisco Cantú, author of the new narrative nonfiction book, “The Line Becomes a River: Dispatches from the Border” (Riverhead Books, out now), grows up with one level of intimate knowledge of the border: his mother, the daughter of a Mexican immigrant, raises him in the national parks of the Southwest, where she worked as a ranger. Seeking a different level of understanding than he could gain through academics and observation, Cantú joins the border patrol, where he tracks, arrests, processes and sometimes saves the lives of the people attempting to cross into the U.S. through unauthorized entry points and without proper paperwork.

Told in lyric prose that brings the uncompromising dangers of the mountains and deserts of the border states to hard, glittering light, “The Line Becomes a River” weaves together research on the history and current state of the border and the forces within Mexico that drive migration with an account of Cantú’s time working as an agent in Arizona and Texas, from training to field patrol and then intelligence work. With his degree in international relations, as his mother points out, joining the border patrol is an unlikely career move for a guy like Cantú, who received the prestigious Whiting Creative Nonfiction Grant to complete this book. “You can tell whoever asks that I’m tired of studying,” he tells her, “I’m tired of reading about the border in books.”

She remains unconvinced that a job in law enforcement is necessary to fully comprehend an oppressive system and concerned about what effect his involvement in such an institution might have on her son’s humanity. And in the beginning of the book, the reader might have reservations about his enterprise. His mother’s voice provides a welcome and necessary ongoing critical counterpoint to his willingness to do this work, and as such provides an emotional touchstone for the reader, too. In the hands of a different writer, "The Line Becomes a River" could have become a longform piece of adrenaline journalism from which the writer is lucky to emerge alive, and which offers confident assessments about the efficacy of our immigration and enforcement system from an outsider's cool perspective. Instead, Cantú has written a poetic and empathetic work whose message — the border is built on an imaginary line, but its impact on the people who cross it, or can't, is real — feels more urgent this year than ever.

As Cantú's mother suspects, the job does exact an emotional and psychological toll. The first two-thirds of the book reflect a psyche constantly under attack by what he witnesses: dead bodies in the desert; survivors found, half-mad of thirst and desperation, wandering the unforgiving terrain, knowing that when they are sent back, they will attempt the treacherous crossing again and again until they succeed or don't; the inexorable threat of cartel violence; the systematic dehumanization of vulnerable people. The stress of trying to maintain and practice humanity inside such an adversarial role leaves him grinding his teeth at night, when he is haunted by dreams of the landscape and the dangers that lurk in it.

Much of the current rhetoric around law enforcement is broken into two camps: the unquestioning assumption of ingrained heroism on one side and the suspicion of unchecked power in an authoritarian arm of state enforcement on the other. Cantú’s accounting dwells instead in the ambiguities of the job and its mission. In one scene, his fellow agents destroy a couple of backpacks full of supplies abandoned by drug smugglers, a routine they follow when they encounter such caches, the idea being that when the migrants “regroup and return to find their stockpiles ransacked and stripped, they’ll realize . . . that it’s hopeless to continue, and they’ll quit right then and there, they'll save themselves . . .” And yet his supervisor also says “Hell no” to trying to track down the people who left the backpacks and the drugs behind, wary of the load of paperwork that a smuggling arrest, rather than a simple load of confiscated contraband, would bring. Cantú’s eye for the emotionally significant detail never closes: inside one of the backpacks, a prayer card for St. Jude, patron of lost causes and desperate situations.

The latter third of the memoir recounts his time after he leaves the job and experiences the system from the other side, as he advocates for an undocumented friend — a family man, active in his church, beloved at work, raising three kids — who is apprehended while returning from visiting his gravely ill mother in Mexico. The book up to this point is Cantú's story — how the work affected him, what he learned and realized, how he grew in his understandings, both emotional and logistical, of the border. The story of José — one individual, a friend instead of a different set of strangers every day — is where the stakes of the book become manifest.

Despite his decades of undocumented status, José is unmistakably a good American — in every emotional, if not official, sense of the word. He works hard, he pays his bills, he contributes to his community. He risks his family's stability to see his mother before she dies, and he is caught. Can Cantú, with his intimate understanding of the process and bureaucracy, put his hard-earned knowledge to work to save one man's family and future? Anyone with a heart can see how this story should end, and that José, though he is the dynamic and loving individual we come to know through Cantú's account, is not exceptional in that regard, but rather closer to the norm than those ordering ICE raids, and those cheering them on, would like to admit.