Pioneers of fake news: Can WorldNetDaily be saved? 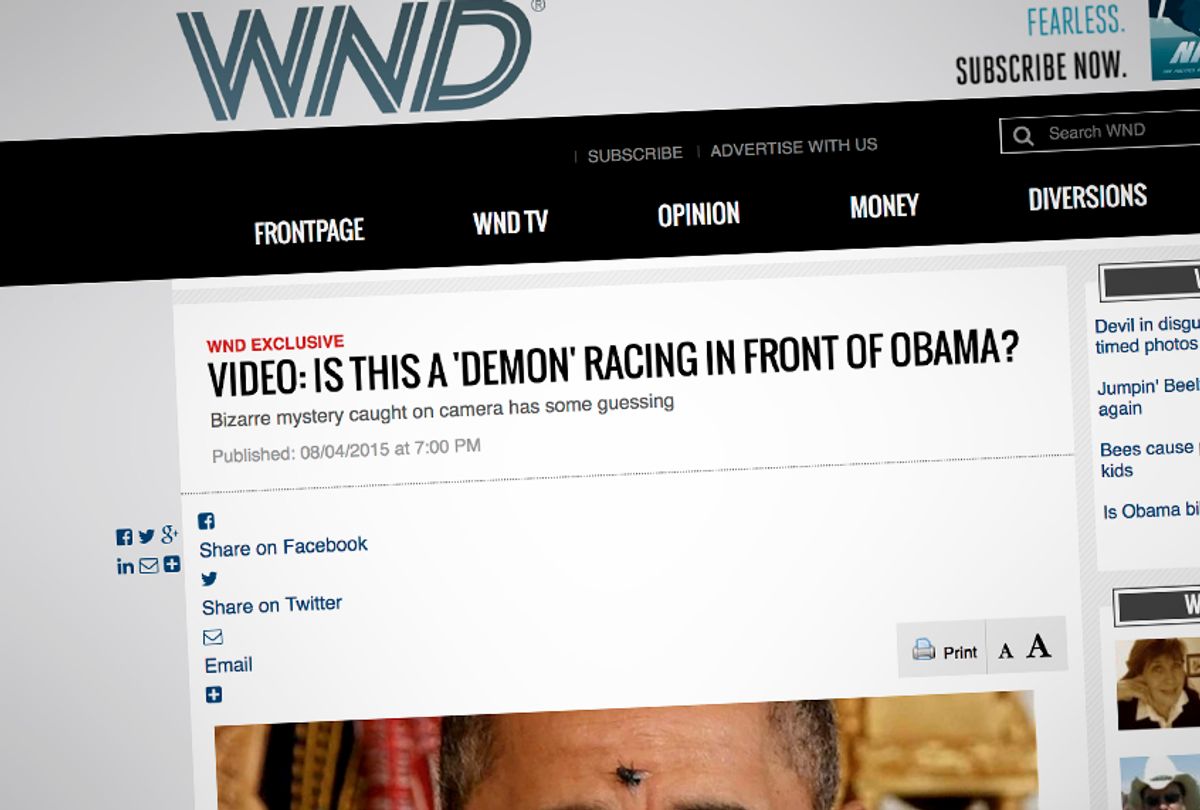 A screenshot from a 2015 article from WND.com promoting the idea that then-president Barack Obama might be demon-possessed. (wnd.com)
--

It's long been observed within the media industry that working with the president is far less profitable than being in the opposition.

“What's good for the nation is bad for The Nation,” Victor Navasky, the former publisher of the left-wing magazine, has often quipped.

During the presidency of Bill Clinton, conservative magazines like the American Spectator were rolling in subscription money, while most left-leaning magazines had to scrape by, all thanks to what political scientists call "negative partisanship" at work. It's easier to get people interested in opposing policies they really hate than ones with which they slightly disagree.

Donald Trump's rise upended a lot of conventional political wisdom, and in the media world, this is proving true as well. Instead of facing lower viewership, many conservative and far-right outlets are attracting more people than ever.

Ratings at the president's favorite media outlet, Fox News Channel, were at all-time highs in 2017. (They were at the anti-Trump MSNBC as well, however.)

In the online realm, the audience metrics are mixed. Several right-leaning publications have more visitors than during the presidency of Barack Obama.

Declining interest in politics among Republican voters is probably at work in such cases. But their traffic losses are nowhere near the declines experienced by several right-wing sites who had managed to build massive audiences thanks to fabricated, exaggerated and deliberately inflammatory content.

While junk websites remain a highly influential part of the right-wing media ecosystem, some of the earliest players have been catastrophically harmed by recent efforts by Google, Twitter and Facebook to curtail fake news on their platforms.

Conservative Tribune, a highly untrustworthy news site that was found to be more influential than Fox News on Facebook during the 2016 election in an academic study, has seen its traffic fall by a factor of 5. In January, it had 7.9 million unique visitors, down from 41 million in April of 2015. Quantcast has no data from earlier months for the site. Another junk publication, Western Journalism, had just 745,000 visitors in January, down from 15.6 million in March of 2015. (Quantcast also has no monthly data from earlier.)

Low-quality publications have also had their revenues curtailed, thanks to efforts by Google and other advertising firms who -- under pressure from activists like the group Sleeping Giants -- have begun blocking ads from appearing on junk content. Several social media sites have also begun de-prioritizing content from known schlock purveyors. Facebook and Google are now providing small amounts of funding to nonpartisan fact-check organizations as well, sometimes even including their reports alongside spurious content.

Various junk sites have dealt with these measures in different ways. Some have simply set up new websites in the hopes that the web's titans won't catch on. In February, Liftable Media, the owner of Western Journalism, began posting content to a new publication called the Western Journal, complete with graphics that are astonishingly similar to the branding of the Wall Street Journal.

Infowars, the fake news site founded by radio talk show host Alex Jones, has moved laterally in another way by also posting its content to the social media profiles of its employees while also bringing in freelancers like "Pizzagate" promoter Mike Cernovich. At the same time, Jones is redoubling his efforts to brainwash his fans into buying herbal supplements. He's also amped up his own craziness, shifting from warnings about inter-dimensional aliens that secretly control the world to near-daily calls to jail Trump's political opponents. Jones has even called for the execution of the president's enemies.

Other junk website owners have simply just sold off their properties and moved on to other sites or other lines of business. That's why Liftable Media is now the owner of Conservative Tribune, for instance.

The crackdown on digital detritus has taken a particularly harsh toll on the business of WND, the website formerly known as WorldNetDaily, which is now begging its readers to help fund its operations.

Founded in 1997 by former newspaperman Joseph Farah, the site built its audience originally by promoting various conspiracy theories against Bill and Hillary Clinton, especially false accusations that the presidential power couple had their political enemies murdered.

During the Obama years, WND cashed in by heavily promoting the false "birther" theory that Obama had been born in Kenya rather than Hawaii and had forged his birth certificate. It also ran a number of stories on its site claiming that Obama was the biblical Antichrist or was demon-possessed. As the end of Obama's second term edged closer, WND began promoting the idea that he might not voluntarily leave the office.

Frequently, Farah and his writers couch their nonsensical theories as hypotheticals. After all, anything could happen. Why not ask the question?

"If this admittedly unlikely and far-fetched scenario occurs, it will demonstrate that Obama has been planning it for quite some time. That’s why I’m telling you about the remote possibility now," Farah wrote with a virtual wink and a nod, in an August 2016 column raising the possibility that, just maybe, Obama might indict Hillary Clinton.

But the old magic just doesn't work like it used to when Google and Facebook looked the other way. Even favorite themes like "Luciferianism" haven't been able to get clicks.

Faced with declining traffic, revenues and staff departures, Farah is now resorting to asking his readers for money. In a Jan. 8 column, he told his remaining flock that WND is in "crisis" and that "many loyal WND staffers are working without salary" in order to keep the website afloat.

"It’s not easy to make a plea like this to you, our faithful readers, and I do so in all humility," he wrote, informing readers that he had no billionaire sugardaddy to help. "We’ve never been beholden to anyone other than the Good Lord."

In a Jan. 15 email, Farah went after Google and Facebook, whom he accused of trying to "penalize independent news operations like WND."

The WND founder's complaint is a familiar one from owners of right-leaning websites that publish poorly fact-checked or entirely made-up stories. Last month, the Daily Caller accused Google of political censorship against several far-right websites known for publishing false information -- without noting that the search giant had not taken such action against conservative outlets with actual journalistic standards.

"Since the election, my Facebook traffic has been significantly impacted," Jim Hoft, owner of the frequently wrong Gateway Pundit blog said during a Feb. 6 summit of far-right social media pundits. He and several other panelists called on Republican politicians to take government action to force tech companies to stop blocking misleading content. Hoft did not mention that he had in the past boasted about providing "fun" for readers by posting unchecked stories.

Like Hoft, Farah has refused to admit that his long record of promoting ludicrously false claims could be the reason why search and social media companies have sought to minimize his influence.

"Farah is silent on what may very well be the actual cause of WND's situation: It doesn't care about the truth. It's not trusted, and it's not credible," Terry Krepel, a former employee of the left-leaning group Media Matters, wrote on his ConWebWatch blog two days later. "Google is not ranking WND highly not because it's 'independent' but because it's not trustworthy. Same for Facebook driving traffic elsewhere. It's telling that even with Facebook's problems with promoting fake news, WND couldn't get a toehold."

Krepel's point is one that Farah will likely never concede, at least publicly. He did not respond to requests to comment for this story, including a tweet I sent him on Wednesday asking him why he was telling his Twitter followers that Pope Francis was "under the spirit of the Antichrist."

Thus far, the lights still appear to be on at WND. It's unclear how long Farah's pitches will keep working, however, since the site's dwindling audience is clearly heading for the rest home, where reading the web is a lot more difficult than zoning out to Fox News. Farah's problems are worsened by the fact that his operation is a for-profit business; despite their professed love for capitalism and "makers," right-wing plutocrats overwhelmingly concentrate their political spending in tax-deductible ventures.

On the other hand, Farah has at least once ace in the hole. His daughter, Alyssa, is currently the press secretary for Vice President Mike Pence.

Given that Trump owes his political career to the birther conspiracy theory, couldn't Farah get his friend in the White House to throw a few dollars WND's way, just for old times' sake?