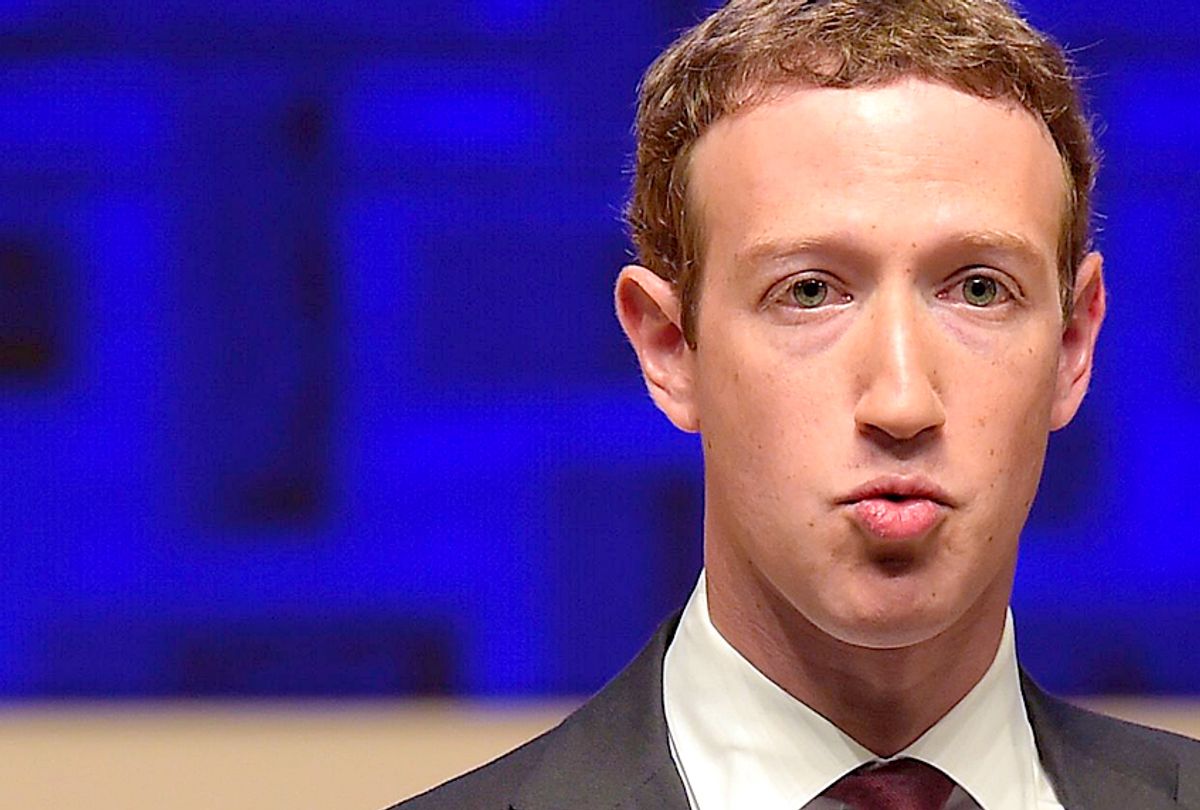 As special counsel Robert Mueller, congressional investigators and investigative journalists continue to plug away at determining how Russian agents may have used social media (among other tools) to manipulate American voters in the 2016 presidential election, a larger reality appears to be overlooked. Whatever the Russians did on the internet was only possible because millions of Americans have been gulping down fake news via Facebook long before Donald Trump descended his golden elevator in the summer of 2015.

That reality is manifested daily, but one recent example demonstrates just how pervasive fake news is, especially on the political right.

Amid the devastation wrought on Puerto Rico by Hurricane Maria, millions of residents are having trouble getting access to food and basic medical supplies as impassable roads prevent aid trucks from getting to neighborhoods and drivers from getting to their trucks. Read through any number of Facebook pages catering to grassroots Republicans, however, and you’ll get another explanation: The shortages are the fault of local Teamsters Union members who have gone on strike.

According to the social media statistical website SharedCount, hundreds of thousands of Facebook users have shared this entirely false claim, which has been repeated by sites like Conservative Treehouse, The Gateway Pundit, Conservative Fighters, and 100 Percent FED Up.

The story has become so popular that it made the jump to Fox News ,where correspondent Julie Banderas told viewers that “the truckers, the Puerto Rican employees, are on strike.” President Donald Trump seems to have bought into it as well, saying on Tuesday that “we need their truck drivers to start driving trucks.”

It’s no wonder that a tale of greedy union members refusing to work and thereby making a Republican president look bad would become a viral story among Trump fans. Unfortunately for them, the story is completely untrue. There is no trucker strike in Puerto Rico and the supposed evidence for it is based on an out-of-context quote from a Huffington Post article, drawn from an extensive interview with Air Force Col. Michael Valle, the official coordinator of the federal government’s relief efforts.

“These viral stories spreading across the internet are nothing but lies perpetrated by anti-union entities to further their destructive agenda,” Teamsters Union president James P. Hoffa said in a public statement. “The fact that they are attempting to capitalize on the suffering of millions of citizens in Puerto Rico that are in dire need of our help by pushing these false stories, just exposes their true nature.”

According to Facebook, these kinds of fake news stories should no longer be able to spread so easily on its platform. In a December blog post, the social networking giant announced that it would start teaming up with fact-checking groups like Snopes, Poynter, and PolitiFact, as well as journalistic entities like the Associated Press and ABC News, to verify claims spreading on Facebook posts. In the event that one of these third-party sites has disputed the story, Facebook now brings up a notification box which diplomatically informs members that “you might want to know that there is additional reporting on this.” Of course, one can still choose to “Post Anyway.”

While such flagged stories cannot be promoted via Facebook’s internal advertising system, there appears to be no other penalty for spreading disinformation, even for pages like Conservative Fighters, which is one among hundreds of bogus Facebook pages operated by people in the Eastern European nation of Macedonia who've made millions of dollars duping conservative Americans.

Facebook has removed a handful of completely fraudulent websites, but thousands remain, including several that pretend to be Conservative Fighters, and World Politicus, a Macedonian-run page notorious for spreading the viral claim that former Democratic presidential nominee Hillary Clinton would be indicted shortly before last year's election. Some of these fake websites have even been officially “verified” by Facebook, including some that have been linked to Russian intelligence operations.

The Puerto Rico Teamsters fabrication provides a perfect example of why Facebook’s warning system is simply inadequate. In the first place, both Snopes and PolitiFact, the sites which Facebook links as providing “additional reporting” about the story, lagged several days behind the fake Teamster story's spread. That's mostly because Facebook pays almost nothing for the service its fact-checking partners provide, so their ability to keep up with the fake news tsunami is severely limited. Why a company with billions of dollars in cash sitting around only just recently started paying a paltry amount for such an important service is a completely different story.

In interviews with USA Today’s Rachel Sandler, several of Facebook’s partners emphasized how few stories they are able to examine:

Aaron Sharockman, the executive director of Politifact, told USA Today he sees about 200 flagged stories per day. A small amount of those stories are patently false, he said. The rest are either completely true stories reported by trolls or misleading — but not necessarily false — hyper-partisan clickbait . . .

Lori Robertson, managing editor at FactCheck.org, told USA Today the organization debunks between two and three articles per week for the Facebook partnership. She added that the partnership with Facebook has made the nonprofit shift more resources to debunking fake viral claims.

In the case of the nonexistent Puerto Rican trucker strike, the false claim began spreading on Sept. 28, but Snopes did not file a debunking piece on it until Oct. 2. PolitiFact did not get to it until Oct. 3. Because of that lag, even though both sites’ pieces are being officially promoted by Facebook, the original, debunked articles have been shared many more times in aggregate.

Because of the faulty construction of Facebook’s software, unless one of its partners explicitly flag a story as false, no sort of warning appears on the site. While writing this article, I was able to post a link from the fake news site RedStateWatcher spreading the false strike story without any notification from Facebook.

I could have picked any number of other sites to use. Unless those bogus publications had been unlucky enough to be spotted by a Facebook partner, the social giant’s fake news alert system would have done nothing to counter them.

Even if the stars align and one of Facebook’s underfunded partners has managed to debunk a fake story, it can still spread widely, thanks to the widespread skepticism on the American right toward the mainstream press and political fact-checking. A perfect example of this was a March post from another random website claiming to expose the forgotten trade of Irish slaves in early America. Interviewed by the Guardian, the fake story’s author noted that Facebook’s efforts to warn people away from the piece actually made conservatives want to share it more.

“A bunch of conservative groups grabbed this and said, ‘Hey, they are trying to silence this blog – share, share share,’” he told reporter Sam Levin. “With Facebook trying to throttle it and say, ‘Don’t share it,’ it actually had the opposite effect.”

While Facebook pages filled with exaggerated and fabricated posts can also be found on the left, their audience is nowhere near the size of the right-wing phony news universe, according to an extensive study of American media in 2016 conducted by the Berkman Klein Center, a research organization affiliated with Harvard University.

Citing “asymmetric vulnerabilities” within America’s political spectrum, the study’s authors noted that “the more insulated right-wing media ecosystem was susceptible to sustained network propaganda and disinformation, particularly misleading negative claims about Hillary Clinton. Traditional media accountability mechanisms — for example, fact-checking sites, media watchdog groups, and cross-media criticism — appear to have wielded little influence on the insular conservative media sphere. . . . The institutional commitment to impartiality of media sources at the core of attention on the left meant that hyperpartisan, unreliable sources on the left did not receive the same amplification that equivalent sites on the right did.”

Facebook lies at the heart of the problem, according to the researchers. In their analysis, they found numerous junk news websites that had no real influence on the larger mainstream media, within Google search results, or even on Twitter. In fact, the study found that “disproportionate popularity on Facebook is a strong indicator of highly partisan and unreliable media.”

While the Berkman Klein report has received a fair amount of media coverage, the central role of Facebook in spreading fake news has received comparatively little attention, Yochai Benkler, one of the researchers who compiled the report, told Salon.

Although the company did not respond to repeated interview requests, Facebook claims it wants to put a stop to fake news on its platform.

"For the ways my work was used to divide people rather than bring us together, I ask forgiveness and I will work to do better,” the company’s founder and CEO Mark Zuckerberg wrote in a Sunday post to mark Yom Kippur, the Jewish day of atonement.

He’s clearly got his work cut out for him. As of now, Facebook has become Fakebook.

Next: How Facebook and junk news websites work together to rake in millions of dollars a year and why it's killing conservative media.