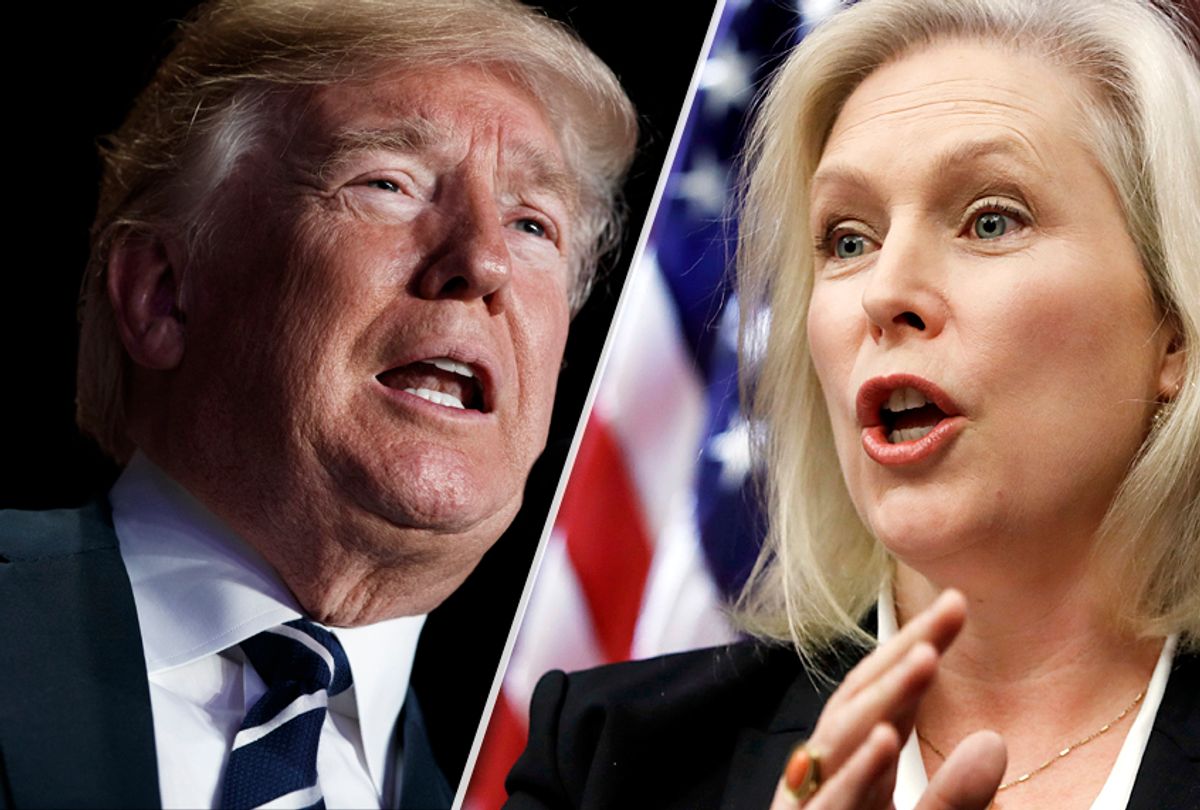 Over the weekend, Donald Trump — who has repeatedly threatened to imprison Hillary Clinton, even though she was cleared of any crimes after multiple investigations — suddenly developed an enthusiasm for "due process." "Peoples lives are being shattered and destroyed by a mere allegation," complained a man who still insists he was right to call for the execution of five young men who were later discovered to be innocent. "Is there no such thing any longer as Due Process?"

We can assumed that the tweeter in chief was referring to the recent resignations of White House staff secretary Rob Porter and speechwriter David Sorensen, after exhaustive investigations of both men's histories of alleged domestic violence were published. It remains unclear what Trump means by "due process," since at least one of those men, Porter, was subjected to the thoroughgoing process known as an FBI security clearance check — and when Trump and White House Chief of Staff John Kelly didn't like the results of that process, they apparently threw them out.

Nonetheless, Sen. Kirsten Gillibrand, D-N.Y., a Washington firebrand of the #MeToo movement, seized on the moment, tweeting about the numerous women who have accused Trump of sexual assault and sexual harassment:

Gillibrand followed up this tweet on Sunday by telling "60 Minutes": “I think he should resign, and if he’s unwilling to do that, which is what I assume, then Congress should hold him accountable. We’re obligated to have hearings."

In the current political and cultural climate, Gillibrand's comments should be understood as more than gotcha-ism, and not just because the various accusations against Trump over the years are credible and serious. Her comments also reflect the larger opinion of American voters, most of whom do worry that Trump is an abusive misogynist and want to see more done to investigate the claims against him, at least according to a November 2017 survey done by the polling firm PerryUndem.

"Our survey shows that a majority of voters support investigating allegations of sexual assault by politicians," Tresa Undem, the head researcher, explained over email. Indeed, "majority" is an understatement: In her firm's survey, 95 percent of respondents agreed with that premise. "The President is not immune in most voters’ eyes," she continued, with 76 percent supporting investigations into Trump's alleged behavior, "including a significant proportion of the President’s supporters (43 percent)." 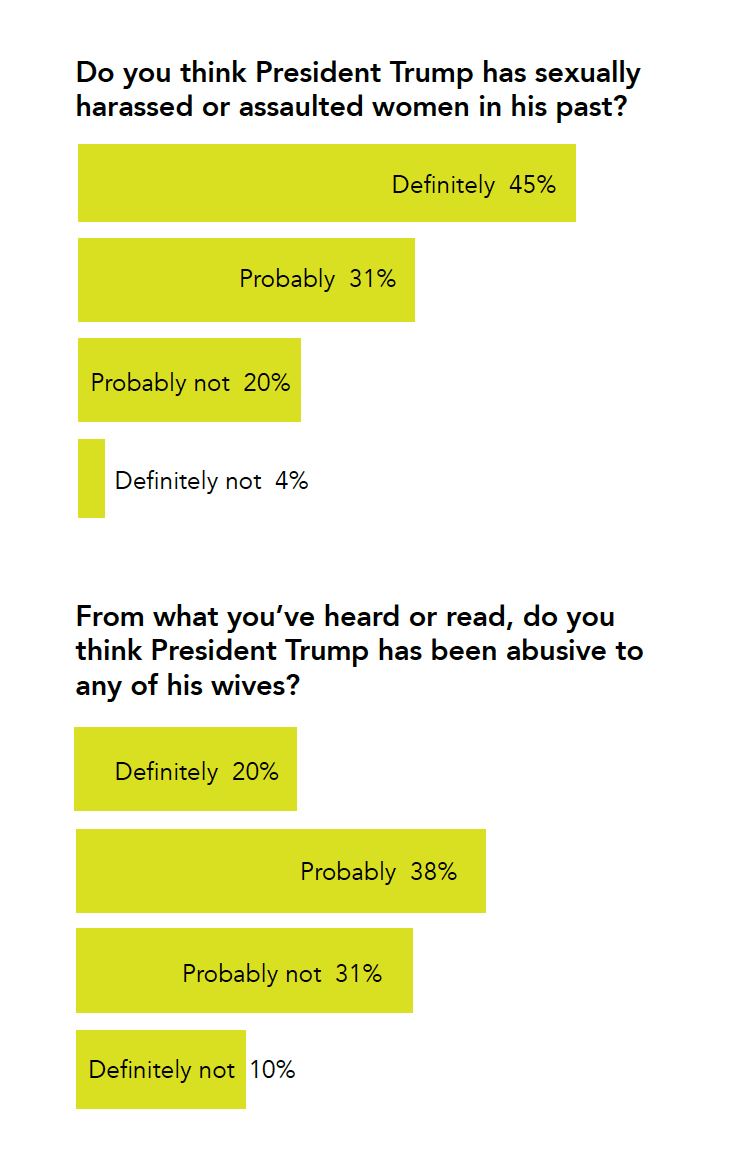 These suspicions comport with the public record. Most famously, there is the "hot mic" tape from "Access Hollywood," in which Trump can be heard bragging, "I just start kissing them. It’s like a magnet. Just kiss. I don’t even wait. And when you’re a star, they let you do it. You can do anything."

Then, famously, he added, "Grab ’em by the pussy. You can do anything."

That story grabbed headlines, but perhaps even more disturbing is the testimony of domestic violence offered by Trump's first wife, Ivana Trump, during a divorce deposition. Ivana Trump described her husband blaming her for pain he experienced following scalp reduction surgery, because she recommended the surgeon. In her telling, he held her down, tore hair from her head and then forced his penis inside her, an act she described at the time as "rape." He then allegedly mocked her after she spent the night in a locked room, crying.

Since then, Ivana Trump has backed away from the word "rape," after a divorce settlement was reached that included a gag order forbidding her to speak about their marriage to the press without her ex-husband's permission. Donald Trump's attorney has offered a series of changing rationales, claiming, "You cannot rape your spouse" by law (which is false) and arguing that it was more that "she felt raped emotionally." Despite all the quibbling about semantics, it's worth noting that Ivana Trump has never changed the details of her account, and Donald Trump's lawyer has never challenged her on the facts.

Trump supporters, unsurprisingly, are more skeptical of the well-documented accusations of harassment and violence against the president. Still, 38 percent of Trump supporters, according to PerryUndem, believe that it's probable that he has harassed or assaulted women.

Despite the widespread support among voters for an investigation into Trump's history of harassment and abuse, there seems to be no movement toward holding even a single hearing in Congress on this issue. Of course this is part of a larger pattern in which the Republicans who control both houses of Congress ignore the mounting concerns and evidence that Trump could be guilty of a multitude of crimes. Most of the indications of corruption or coverup relate to the Russia investigation, of course, but the absence of any interest in investigating the allegations of sexual and domestic violence is, as Gillibrand has repeatedly argued, also a major oversight.

The good news is that if Democrats take back the House of Representatives or even the Senate in November, hearings could start as early as January 2019. Legal remedies may continue to be out of reach — even if the House were to pass articles of impeachment against Trump, it would require 67 senators to remove him from office — but there would be considerable value to high-profile hearings where women are sworn in, one after another, to explain under oath how the current president treated them, often while they were simply trying to do their jobs.

It would be difficult for Trump to continue dismissing such allegations as "fake news," and that process could establish a public record of the serious human cost to elevating a proud misogynist to the White House. Such a prospect could be one of the Democrats' most effective campaign themes this fall.