Ward was quick to share a story that praised her back in October, but it turns out no one knows who runs the site 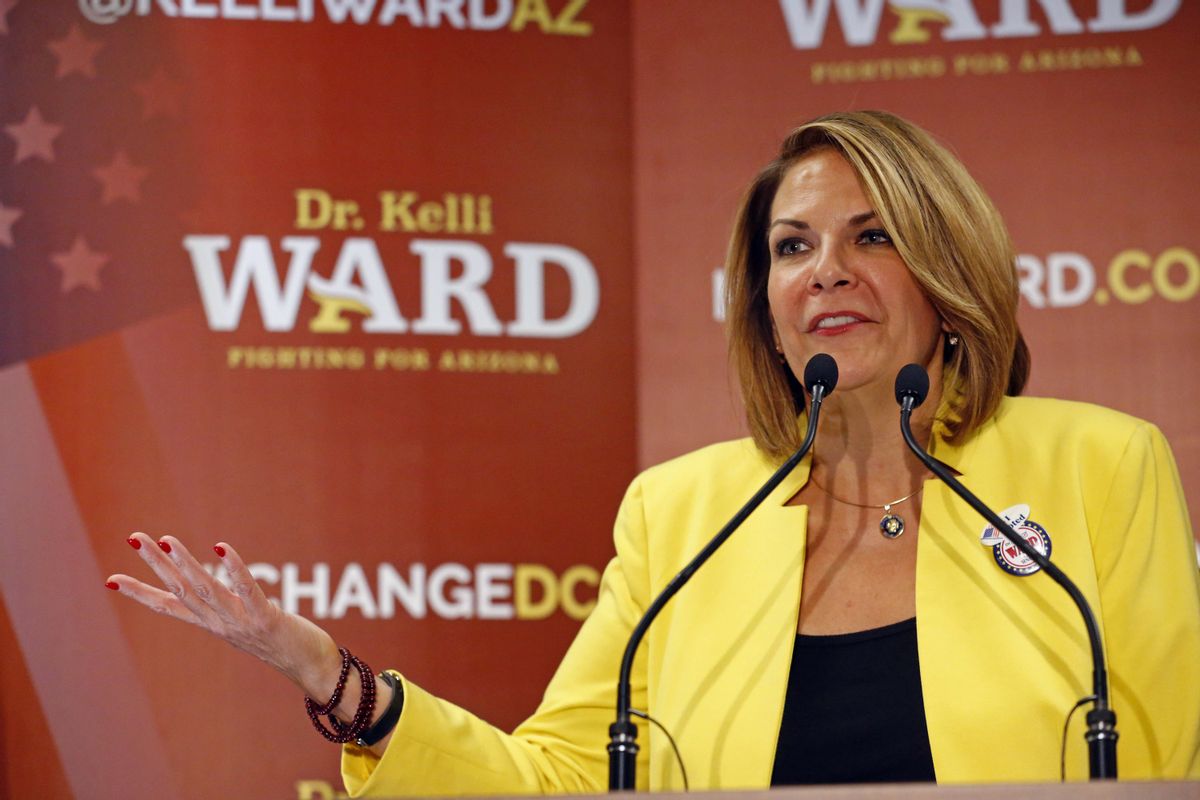 Kelli Ward, the Republican candidate running for Sen. Jeff Flake's seat in Arizona, shared an article praising her on her campaign website and Facebook page, but as it turns out, the website she shared was the furthest thing from a legitimate news site.

The article in question came from a column published in the Arizona Monitor, a website that has more questions about it than it does answers, Politico reported. The site is entirely anonymous, and its domain registration is hidden. The site, though, is very pro-Ward. A mission statement at the top of its home page reportedly read, "Striking Fear into the Heart of the Establishment."

Ward shared the link on Facebook and on her campaign website on Oct. 28, only a few weeks after the site had first launched. On its Facebook page, the Arizona Monitor is listed as a news site. The story Ward shared blasted her primary opponents, and the dubious site has frequently nicknamed one her opponents, Martha McSally, as "Shifty McSally," a notable tactic used by President Donald Trump.

"They all, despite how much some of them profess their love and devotion to President Trump, didn’t have the stones to run against Jeff Flake and will have made the ‘brave’ decision to run for Senate only after Flake decided he wasn’t going to run . . . Kelli Ward is your woman," the story read, according to Politico.

Ward said she didn't know the site's origins and that she had likely never read a story by the site prior to the one she had shared. "FYI - I have no idea who runs it and have no connection to it. I actually don’t know if I’ve ever read a story from there," she told Politico.

Officials from her campaign also defended her and suggested that opinion stories should have a different set of standards than news stories.

"When sites present themselves as credible, I think you have to do your due diligence and look into them," Zachery Henry, Ward's campaign spokesperson said, according to Politico. Henry also denied any ties to the site and said he didn't know who ran the site. "When it’s opinion, you have a little more leeway."

"I don’t think sharing an article that’s favorable to you, especially when there are no inaccuracies or factual issues in it, associates us with the writer or the paper," Henry said. "Because we share stuff all the time, from the Arizona Republic all the way down the list."

In the age of Trump, fake news has seemingly swept the nation and has remained a dominant topic of conversation, and concern, for the better part of two years. Despite cries of fake news from all ends of the political spectrum, the right has often been the loudest, despite its tendency to engage in it, or fall victim to it, the most. Recently, Rep. Devin Nunes, R-Calif., was tired of the mainstream media coverage of his contentious and partisan memo, so he created his own news site. The Republican Governors Association was recently guilty of similar behavior and created a news website that didn't disclose it was being run by the RGA.

And, of course, a recent study about fake news released by Oxford University researchers concluded that Trump supporters are the most likely to spread it.