Florida Republican Sen. Marco Rubio called out for NRA money after saying no gun control could have stopped attack 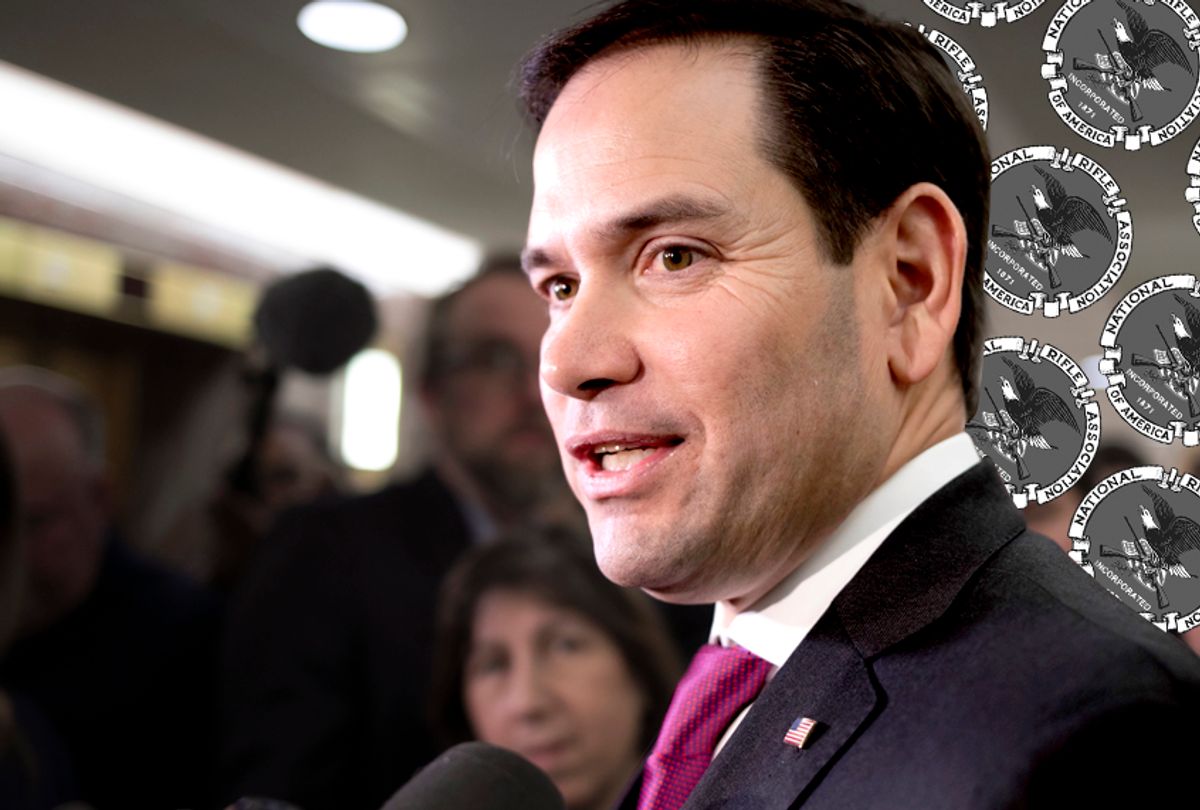 America is being held hostage by the National Rifle Association (NRA). If this wasn't made clear by the fact that America has suffered its 17th school shooting since the start of 2018  — averaging out to one every two to three days — it was demonstrated by how Florida's most famous politician, Republican Sen. Marco Rubio, responded to the news about the massacre at Marjory Stoneman Douglas High School in Parkland that left 17 people dead.

"It’s not, only because people don’t know how this happened, who this person is, what motivated them, how did they get a hold of the weapon that they used for this attack," Rubio told Fox News on Wednesday, prior to the identification of the suspect.

He added, "I think it’s important to know all of that before you jump to conclusions that there’s some law we could have passed that could have prevented it. There may be, but shouldn’t we at least know the facts? I think that we can always have that debate but if you’re going to have the debate about this particular incident, you should know the facts of that incident before you run out and prescribe some law you claim could have prevented it."

He reiterated these sentiments during a speech from the Senate floor on Thursday, even after it was confirmed that a 19-year-old former student who had been expelled returned to open fire with an AR-15 semi-automatic gun he was allowed to legally purchase.

We'll address Rubio's trotting out of the Second Amendment – the favorite tactic of the anti-gun control movement — in a moment. But let's first broach some inconvenient facts that we're consistently asked to ignore by Republican lawmakers.

We are supposed to ignore that Rubio had received more than $3.3 million in career funding from the NRA as of the Las Vegas shooting in October. We're supposed to overlook how the NRA is so powerful that they are currently being investigated by the FBI for allegedly receiving funding from a Kremlin-connected Russian banker to help elect Donald Trump. We're supposed to ignore common sense — namely, that there should be increased restrictions on a weapon which can be and has been used to slaughter hundreds of innocent people over the past few years — because that common sense is deeply upsetting to those whose politics lean toward the paranoid.

And my use of the term "paranoid" here is not an exaggeration. Prior to the late 20th century, the notion that gun control would infringe on constitutional rights or imperil fundamental freedoms was nowhere near the mainstream of American political discourse. The NRA was mainly a sportsmen's club (at least until right-wingers took it over in 1977) and some of the most ardent supporters of gun control were conservatives — particularly after the Black Panthers openly brandished firearms to stop abuses against African American citizens from police officers.

As the right-wing gained more power in American political life, however, the newly politicized NRA managed to make gun ownership into a cornerstone of their political agenda. It was a way to appeal to hyper-masculine fantasies, to indulge in the absurd fantasies of anti-government revolutionaries, to play on racialized fears, to attack liberals who wanted to save lives as supporters of "big government."

When it comes to changing hearts and minds, the approach has been an abysmal failure. Polls have consistently found that most Americans support stricter gun control laws. When President Barack Obama attempted to pass moderate gun control legislation after the Newtown school shooting in 2012, all nine parts of his proposal were overwhelmingly supported by the American public.

The Second Amendment was never designed to state that all forms of gun control should be forbidden. That is the extreme interpretation of zealots who have managed to hold the rest of the country hostage — and the facts do not back up anyone who disagrees.

Unfortunately, while the NRA has failed to indoctrinate the majority of Americans, they have succeeded in controlling our politicians. That is why Rubio's initial instinct after hearing about the school shooting in his own state was to preemptively stave off attempts to discuss strengthening gun control legislation. It's why, despite the events of Wednesday, we all know that gun control legislation simply isn't going to happen.

The people aren't in control of America on this issue. The NRA is running the show. And that isn't spin, that's just the news.

* A previous version of this story stated the number of school shootings in 2018 as 18, a figure provided by the advocacy group Everytown for Gun Safety Support Fund. The organization has since updated that figure.