The emotional segment left a CNN anchor in tears 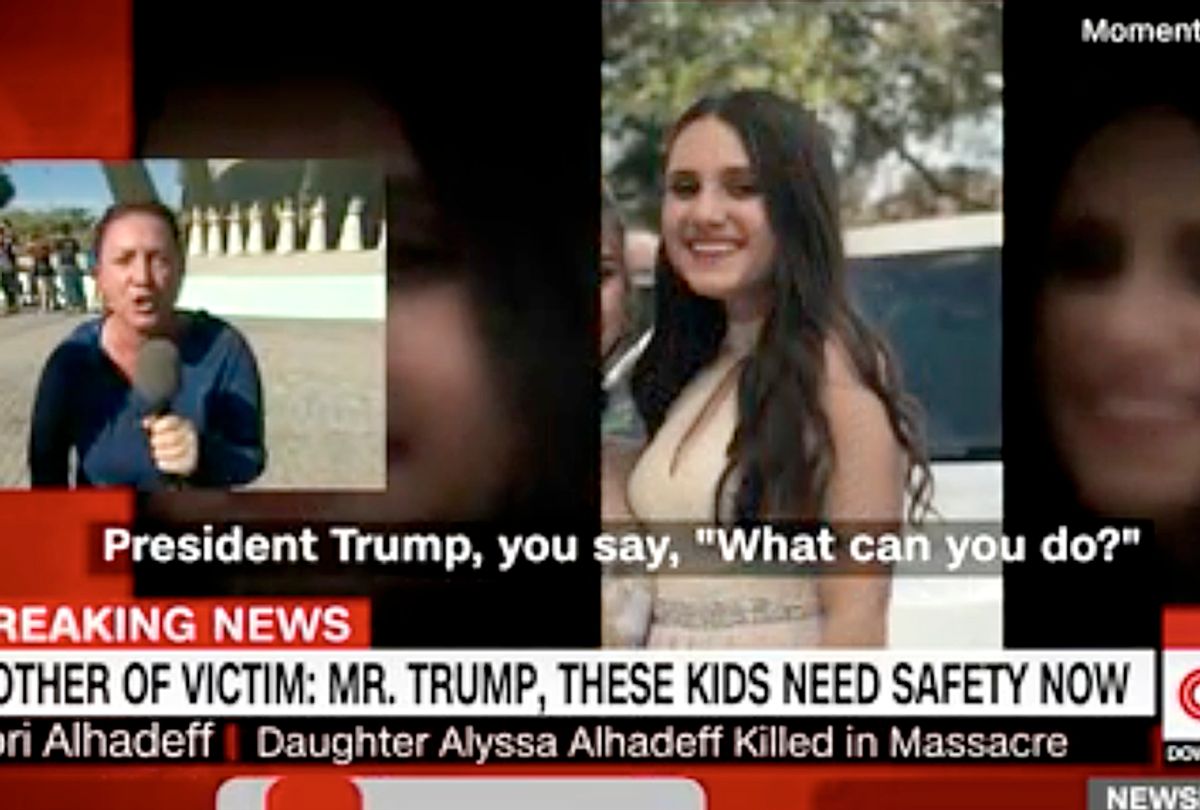 Lori Alhadeff, a grieving mother who lost her 14-year-old daughter Alyssa in the school shooting at Marjory Stoneman Douglas high school on Wednesday, delivered a powerful and heartbreaking message in a CNN interview. In a live segment, Alhadeff addressed President Donald Trump directly, asking, “How? How do we allow a gunman to come into our children’s school?”

“There’s no metal detectors,” Alhadeff said via a live broadcast from Florida. “The gunman, a crazy person, just walks right into the school, knocks on the window of my child’s door and starts shooting, shooting her and killing her,” she continued.

She went on to respond to Trump’s statement on Feb. 15 in which he failed to mention gun control laws.

“President Trump, you say what can you do?” she asked, distraught. “You can stop the guns from getting into these children’s hands! Put metal detectors at every entrance to the schools. What can you do? You can do a lot! This is not fair to our families and our children go to school and have to get killed.”

In a particularly heartbreaking moment, Alhadeff says she had spent the previous two hours “putting the burial arrangements for my daughter’s funeral.”

“Who is fourteen! Fourteen,” she yells. “President Trump, please do something! Do something. action! We need it now! These kids need now!”

The Florida Moms Demand Action chapter said they will keep pushing to pass a legislation that will keep guns out of children's hands.

"My thoughts and prayers are with the victims and their families. But thoughts and prayers aren’t enough, which is why Moms Demand Action volunteers will not rest until we pass strong legislation to keep guns out the hands of people with dangerous intentions," said Kathryn Reeve, a volunteer for the Florida chapter. "We can and must demand our elected leaders do more to keep our communities safe from gun violence,” Reeve continued.

Trump tweeted today that he was headed to Florida. The President claimed in the same tweet that he was "working with Congress on many fronts.”

In Trump's remarks to the nation about the shooting, the president explained that he would be taking steps towards tackling the “difficult issue of mental health.”

"We are committed to working with state and local leaders to help secure our schools and tackle the difficult issue of mental health," Trump said. "It is not enough to simply take actions that make us feel like we are making a difference. We must actually make that difference," he continued.

That response seems to imply that gun control laws will not be part of any governmental solution to the school shooting epidemic. Moreover, given Trump's aversion to universal health care, his ability to tackle American mental health care policy via the mechanisms of government seems questionable.

You can watch the heart-wrenching CNN segment here: