Ali Soozandeh, director of the animated film "Tehran Taboo," describes life in a city of broken laws and hearts 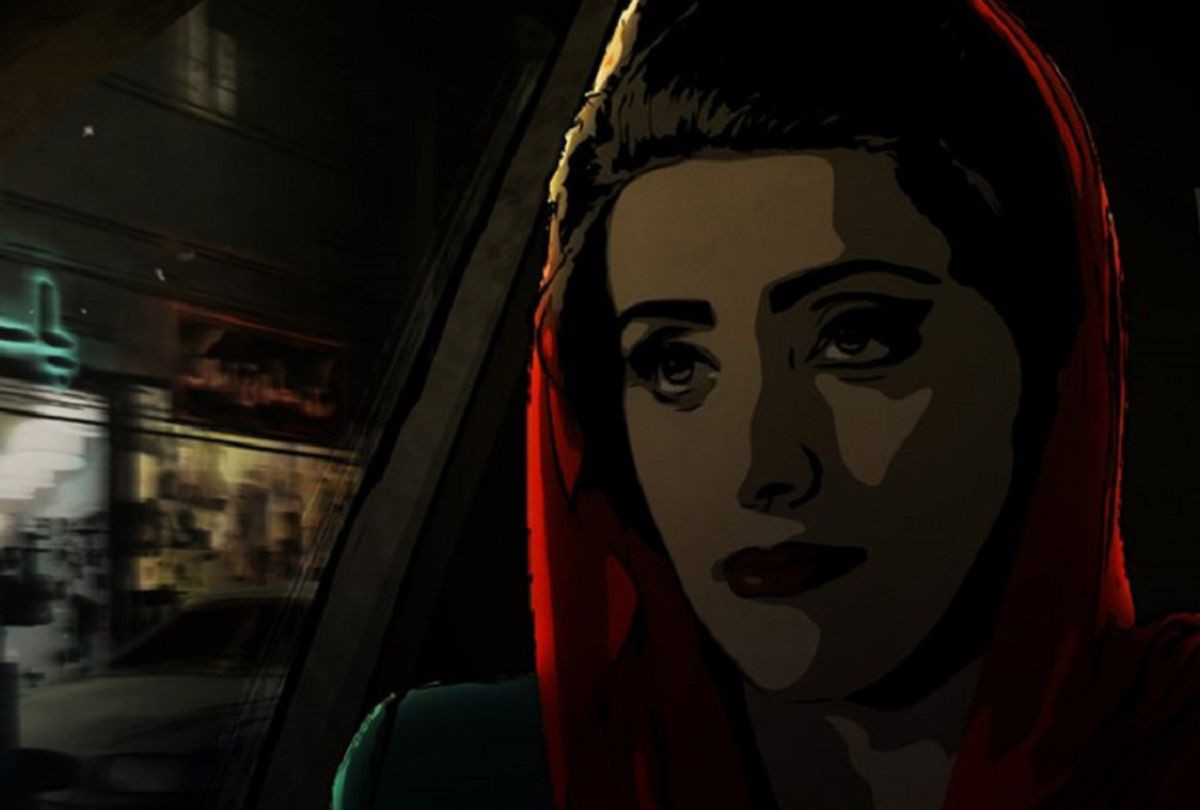 The animated feature “Tehran Taboo” depicts stories of transgressions and trapped lives in modern-day Iran. Writer-director Ali Soozandeh’s absorbing drama intertwines the lives of numerous characters living life beyond the law. Pari (Elmira Rafizadeh) is a prostitute with a young, mute son named Elias. In a scene before the opening credits, she performs oral sex on a taxi driver. Significantly, the driver stops his car and gets out because he spies his daughter walking hand in hand with a man down the street. He is outraged at the indecency of that, revealing just one of the many double standards that exist in Iranian society.

Another storyline involves Babak (Arash Marandi), a musician who has sex in a nightclub bathroom with Donya (Negar Mona Alizadeh). She later tells him he took her virginity, and now she needs an operation to replace her hymen so as not to incur shame and her fiancé’s wrath when she gets married the following week.

A third tale has a newly pregnant woman, Sara (Zara Amir Ebrahimi), hoping to get a job and feel useful. However, her husband Mohsen (Alireza Bayram), a banker, insists she stay at home. When Sara’s phone is used to make a prank call, the morality police search for her, bringing her no end of trouble.

“Tehran Taboo” makes each storyline engaging as it dares to present sex, drugs, divorce, abortion, blackmail and women’s rights (or lack thereof). Soozandeh also shows how folks barter for goods and services, skirting the law in the process, to try to live as well as they can in a restrictive society.

Given what transpires in the film, it seems unlikely that “Tehran Taboo” could have been filmed as a live-action feature, even if the Iranian-born filmmaker wasn’t a German citizen working outside his home country. The film’s use of rotoscope animation is engaging; the characters are all artfully realized, with expressive features that convey the weight of their predicaments. The use of animation heightens the film’s emotional impact.

Soozandeh spoke via Skype with Salon about “Tehran Taboo” and his depiction of forbidden behaviors.

As an Iranian, did you break taboos when you lived in Tehran? Are any of the stories in “Tehran Taboo” from your own life?

The film is partly from my own experience and partly things I heard about, read about, or talked to people about. I was born in Iran and lived there for 25 years. When you grow up in such a country, you have experience with restrictions. As a young man, you have a problem with sexual restrictions in particular. Two years ago, I interviewed Iranians, refugees and others and collected their info about the current situation in Iran.

The title of your film seems to be a challenge to censors and to audiences, daring them to peek into a forbidden world. What was your intention with the film?

I carried a lot of questions in my head over the years. Why or how do so many restrictions — especially sexual restrictions — change the lives of millions of young people in Iran? Writing the script was trying to find answer to those questions.

You have lived in Germany as a citizen since 1995. What thoughts do you have about your homeland? Why do people remain Iranian citizens if life there is so restrictive?

My relationship to Iran is lovely. The people are lovely and friendly, and that’s why I think about these issues in Iran. It is very difficult now to talk about life in Iran, because half of my life I have lived in Germany, and I’m half German/half Iranian. When I watch films in Iran and talk to Iranian people, a lot of problems I had as a teenager come up again. I find we need to talk about it. Iranians try to push the problem to politics and religion, but the main problem is our own mindset. I think, like the first scene in the film with the taxi driver, it is something we need to think about and talk about to maybe solve the problems.

You use animation effectively to depict scenes that also would be hard to shoot on location in Iran. Can you describe your visual approach to the narrative?

We couldn’t shoot in Iran because you need permission from cultural ministries. We didn’t want to shoot in other, similar cities in place of Tehran. I come from a background in animation, and I think it has an advantage — the pictures are not so concrete — they leave room for the audience’s imagination, so we needed to use that. We tested techniques of animation — hand-drawn characters, 3-D and puppets, but none of them really worked. The story is not a fantasy, nor for children. We needed some elements that made the animation recognizable and acceptable for audiences, and rotoscoping did that. It worked better than the other animation styles.

Sexual restriction is the main topic of the film. Pari, Sara and Babek all try to make their way around the sexual restrictions. In Iran, life involves finding a way around these sexual restrictions. Fighting against them informs your everyday life. Both women and men suffer, but women suffer more. In Iran, family is very important, so extramarital sex can bring dishonor and danger. Or the woman who has to teach these rules to the next generation [adheres to] the same rules that limit her. There is more pressure on women in Iran.

Sex is a normal need for everybody, and sexuality in Iran is a private part of life. You can go to a party, have alcohol, and have sex, but it is underground. You have an underground life and a public life. You need to create a different face for your friends, your family and your work; there is a double standard in Iranian society.

There is an interesting motif in the film in which all of the major characters sit for a photograph. The background changes based on why the photo is being taken. Can you talk about that?

As I said, we needed to create several faces for the different faces we have in life. If you want to take a photo for a public job, it should be a dark and serious picture. For a private photo, you need to make a beautiful picture. It’s a symbol for creating many faces. When Babek’s photo is taken, he has decided he doesn’t need a [specific] background or to smile. He doesn’t need “another face.”

I like the way the characters all need permission — for a divorce, for an operation, for a loan — and yet the characters also all find ways around the laws, bartering or even blackmailing. What observations do you have about this?

I think it is important to find out the background of each character and why they behave the ways they do. For example, the guy who kills the cats — once we see he has many problems because of his daughter, and because he needs money, you understand his behavior. He faces the same pressures from society as everyone else. He is not only an offender, but also a victim.

Each character needs to fight this system to solve his or her own problems, be they economic or otherwise. It is a fight that shapes each character’s life. After so many years, you have no neutral perspective. When I was in Iran, it was very normal for me to be corrupt and get money. After I was in Germany, I had some distance from this, and I realized being corrupt is negative. When you are a part of Iranian society, you accept these negative aspects in life as normal life.

There is a line in the film, “a little fart is all it takes to ruin a reputation,” which I think is a very apt way of saying one slip, and you can be shamed forever. All of the characters in the film tell lies to hide shameful things. How does society benefit from such restrictive laws?

I believe in the good of all the characters and in people, but if you need to fight and survive in this restrictive society, you can’t be a good person the whole time. It’s not only in Iran, it’s everywhere. You can find the same issues in Europe. There are virginity operations for Turkish girls in Germany who are under pressure in the society where they live.

The characters are all trapped by their circumstances. Do you think your film sheds light that can help bring about change?

I think talking about the issues is a start for finding a solution. But it is trouble to talk about these things — especially the sexual issues. In theaters after the screenings, you see how divided Iranian society is. Some people agree with the film, and some people are against the film. There are two groups of Iranian audiences. Some arrange themselves with the system and are not interested in changing the system. If you have no problem with the system, you can have a good life. If you have money, you can have sex and drugs. If you are arrested, you can buy your freedom. But people like artists and writers, human rights activists and young people with no jobs and money don’t have such [privilege.] Both groups do not recognize each other. I feel they never discussed these issues together. After the screenings they started a dialogue.

Has “Tehran Taboo” played in Tehran?

The film may have screened underground in Tehran, but not officially.

Tehran is a metropolis of 16 million people. Depending on where you are in society you can find a very different environment. The north is modern, rich and private. There are no checkpoints. Women don’t need to be a virgin to get married. But south Tehran, there are poor societies, and it is very religious. They have the problems and issues we see in the film. The countryside is completely different. We can’t describe Iranian society with one film. We didn’t want to do that. We wanted to show a slice of the society. I wanted to talk about it because a lot of people ask if the whole of Iran is like what we see in the film — and the answer is no.