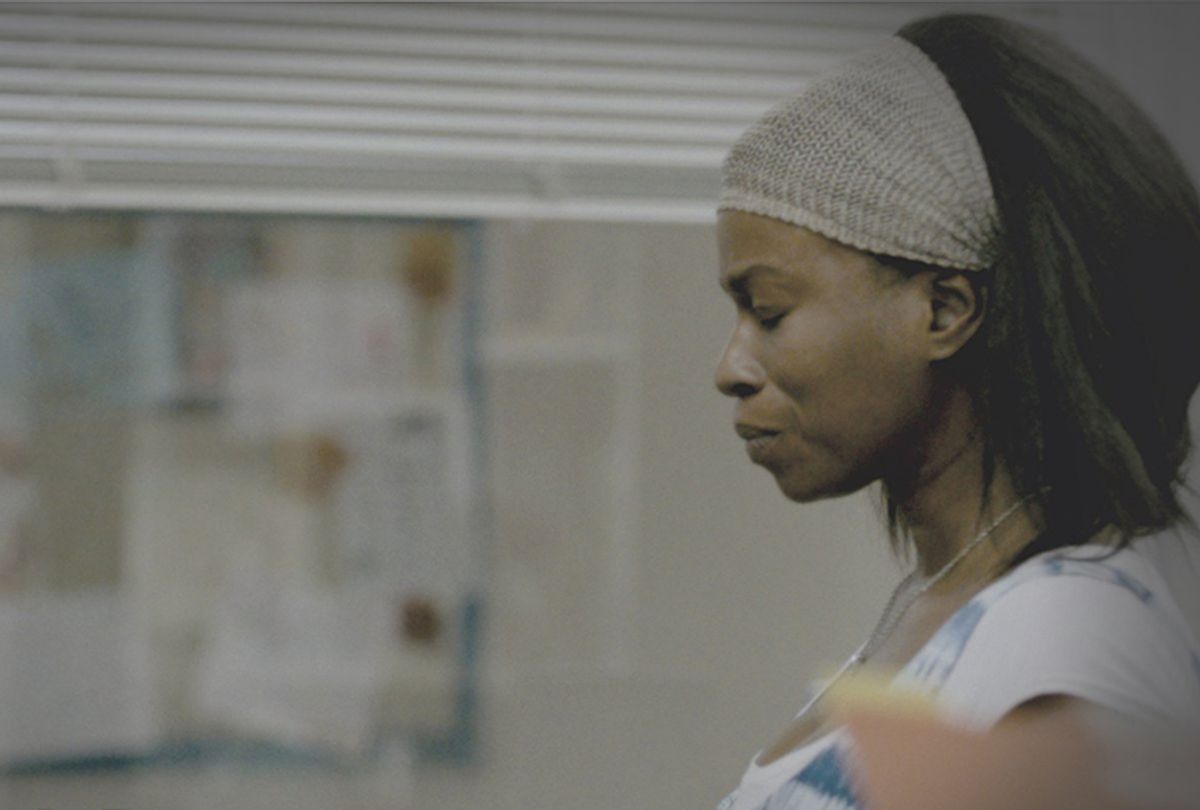 “DeKalb Elementary” is the frontrunner for this year’s Live Action Short Film Oscar, and deservedly so. This tense drama, written and directed by Reed Van Dyk, traps viewers in an uncomfortable place before it becomes something quietly profound and deeply moving.

Based on actual events that unfolded in Atlanta, Georgia, the film depicts Steven Hall (Bo Mitchell) pulling out a rifle in the eponymous school’s administrative office. Firing off some rounds, he forces a lockdown, and asks Cassandra Rice (an exceptional Tarra Riggs) to act as a liaison between him and the police.

“DeKalb Elementary” does what all great shorts do: it immerses viewers in an indelible moment in time. Van Dyk uses the encounter to create tremendous emotion in 20 minutes. Every expression speaks volumes and reveals much about the characters. Every frame is carefully composed. The film almost plays like a documentary; it is that real.

Van Dyk made “DeKalb Elementary” as his pre-thesis project at UCLA (he graduated in December). He has directed a few other short films, including the sweet comedy with the naughty title “nasty hardcoreXXX amateur couple,” which also depicts an encounter between two characters in a single space. His thesis film, “Interior,” is a completely different experience, but it showcases the filmmaker’s incredible range and talent. He is a director to watch.

How did you learn about the story of “DeKalb Elementary,” and what prompted you to make this into a short film?

It’s based on this 911 call that made national news. I was doing research for a feature on another U.S. mass shooting. I wanted to know what a 911 dispatcher says when they pick up the phone. This was the first call that popped up when I googled it.

If you hear the call, it is pretty harrowing. I became overwhelmed with feeling — I couldn’t stop thinking about those two people and how she responds to him. It touched me in a deep place. It wouldn’t work in any other form. That was the gift of this story. It wouldn’t work as a feature.

What I like about short films is that we are dropped into the characters’ lives. We get caught up with the urgency of the situation and learn about them through the slice of life you present. Can you talk about that narrative strategy?

I appreciate feature-length films where you are not given a whole lot about the characters. You fill in backstory based on behavior, or context. When I heard the call, that context gave me a strong feeling for these characters and a reaction to them. I wanted to create a film that worked similarly — what it told the viewer and what it didn’t tell the viewer. I go back to the initial reaction I had to the call.

In the writing phase — I made this film in film school — you get notes to follow one character into the situation. I was more interested in how I heard the story: I was thrust into these circumstances. I looked at the film “Twelve Angry Men,” where you don’t know the characters except inside a room. I didn’t want to follow one person. I wanted to watch life in a space, then disrupt that space, see that room get smaller, and then have just the two characters as the events unfold, then watch as everyone leaves.

Almost the entire short unfolds in the school’s office. There is a single shot of a hallway that gives viewers a second to breathe. Can you talk about creating the claustrophobic nature of “DeKalb Elementary?”

That is a kind of litmus test I have — Does it pass the documentary test? Could you confuse it for real life? Our reference point was a document [the 911 call] from real life.

I think that [staying in the office] was a decision in the writing phase. Do you stay inside the room the entire time, or do you cross cut between events inside the office and the police outside? When I first heard the call, I didn’t know if, when, or who was going to come in at any point. To focus inside the [office] walls creates more tension and questions and firmly identified the people. It’s about the way she begins to see him, and less about the high drama of the police. It’s just the calm quiet drama of these two people.

Do you think — or want audiences to think — that both characters are sympathetic?

It’s an exercise in empathy. The way you see someone as human and not something else, it was remarkable she was able to do this; and through that, we are all able to. What is amazing is that she looked at him and saw herself. She could identify with him.

There is a line in the film Cassandra has, “We all go through something in life.” How did you relate to or identify with the characters?

I was in awe of her more than I identified with her. What she said to him would echo in my mind — over and over — for weeks after I heard the call. I couldn’t believe what she said to him. I was really affected by her spirit and the eye by which she saw him. That line wasn’t scripted. She paraphrased it. But I identified with her based on the circumstances of someone pulling out a gun. There was something so sad, listening to the call — partly because it wasn’t a hostage/potential killer dynamic. Through her, it felt easy to relate to him. My heart was breaking for this guy who woke up to the circumstances he found himself in.

How did you work with the actors on their roles, and help them create such incredible performances?

I did get excited about the idea of casting outside of type, or actors viewers haven’t seen before. In this case, you try to coax the audience that they are watching something real unfold, so it’s a benefit that you don’t know these actors. Bo lives in South Carolina, and Tarra lives in Mississippi. We had extensive rehearsals over Skype. A lot of it became improvisation for him to find the character and plug in to the person through police interviews. We’d zero in on what seemed like the guy and what didn’t. We only rehearsed [the actors together] one day, so it felt more appropriate that their relationship developed in front of the camera. It was finding how the characters would react. I didn’t want Tarra to overlearn the lines. Cassandra is just relaying what Steven was saying to the dispatcher. I’d have her clumsily report things. She knew the essence of what was being communicated but I had her paraphrase it, so she could stumble awkwardly, which has the breath of life.

The film is quite talky, but also uses silence and noise, such as the gunshots punctuating the action, in very appropriate ways. Can you discuss how you worked to keep the film engaging and suspenseful?

I thought a lot about what was happening nonverbally, and mapping what is happening between the lines and between the characters. What he’s feeling when he has to carry through things, and when he’s second guessing. In his case, it was important for him to have two minds about what direction to go. That unpredictability and neutrality leaves you asking what he’s up to and what he’s believing.

Shorts are generally seen as calling cards, or projects that show you can bring a film in on time and under budget. They train you how to work with crews and actors. Why do you make shorts?

I happened to need to make a student short film at the time I made this. More generally, you make shorts to cut your teeth, exercise your muscles, and get better at the craft of filmmaking. They are less expensive and time consuming than a feature. They are stepping stones for the ultimate goal of making a feature. But I also love short stories and that’s the closest parallel.

Can you describe how “DeKalb Elementary” qualified for the Oscars?

Obviously, we didn’t have the Oscars in mind when I was submitting the film to festivals. I submitted to five festivals in the first quarter of the year. It won the top prize at the Clermont-Ferrand [International Short Film Festival] and that qualified it. It later qualified at another fest. I got lucky.

What can you say about the campaigning and Oscar experience?

I haven’t done much campaigning. I do have a publicist now. They are courting write-ups and interviews to raise the film’s profile. I haven’t bought ads. I relied on the film just speaking to people.

How do you think winning the Oscar might help your career?

It would be a help. Being nominated is a help. I’m writing a feature now. I have representation and I have people in my life to make it easier for me to make a feature film. More people will take a closer look if it wins. It’s all a big help.