And boy, do we have some cool guns for you! 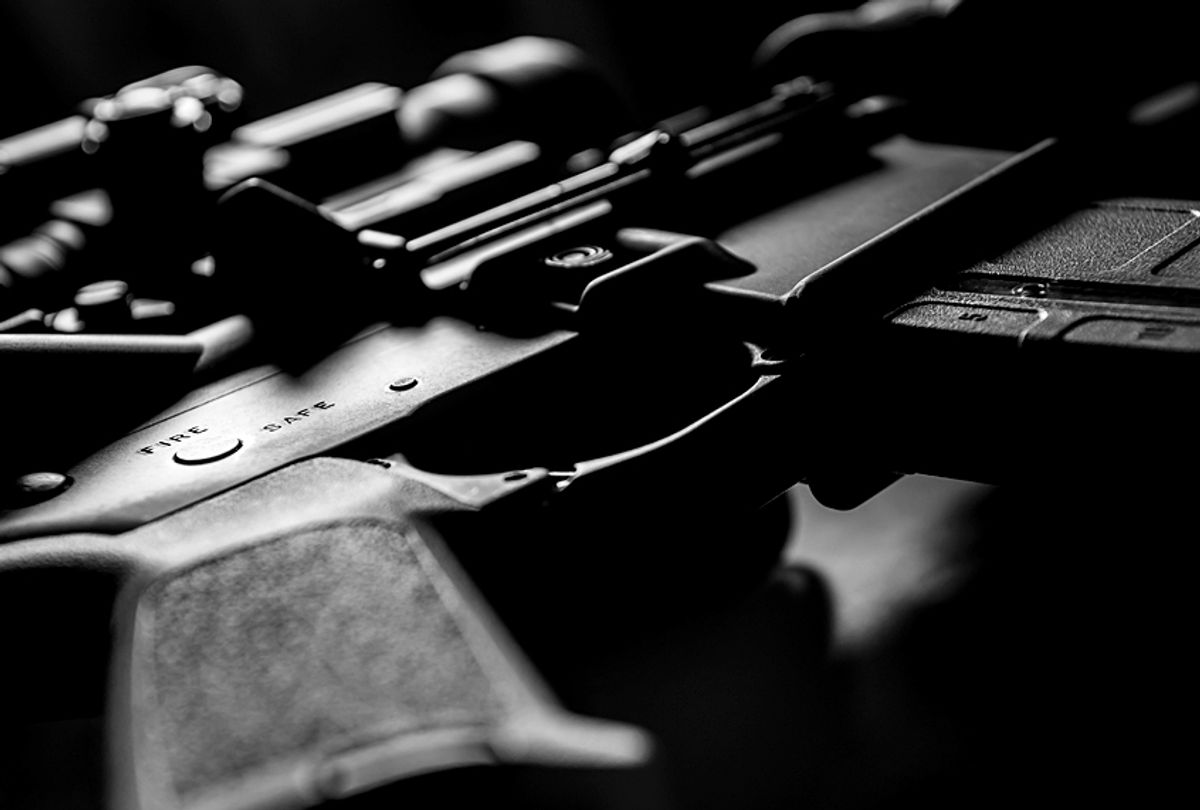 Have you had a look at any of the crap they’re selling to gun nuts these days? They’re saying the school shooter in Florida used an AR-15 style assault rifle to kill 17 and wound another 14, so I thought I’d go on the good old Google machine and type in AR-15. Sweet Jesus, save us from whatever is driving one set of loons to manufacture these things, and another set of loons to buy them.

Let me introduce you to the Remington R15 VTR Predator. Nominally, it’s a rifle. By that, I mean it is a gun with a long barrel that shoots bullets, in this case, the .223 bullet, the same one fired by the military’s M-16 or M-4 rifles, on which this jewel is based. But this isn’t just any rifle. Let’s allow Remington to tell us what this wonderous piece of engineering is.

“The Model R15 VTR Predator is the peak in predator crushing performance. Features include the Magpul Grip. The Magpul Trigger Guard is “V”-shaped for better use with gloves, while the AAC Tooth Blackout silences flash and reduces recoil for even faster follow-ups. Each also comes with a two-stage trigger for match grade accuracy, and is decked out in Mossy Oak Brush Camo. Machines from high strength aerospace 17-4 stainless steel alloy, and coated in a hard, durable, corrosion-resistant SCARmor finish.”

Whew. That’s a whole lot of cool shit on one rifle, huh? I mean, if you’re going down to your local gun shop to pick up a gun, you don’t want just any gun, do you? You want one that has “the peak in predator crushing performance,” because you never know when you’re going to run into one of those nasty predators that are out there menacing the neighborhood, do you? And you don’t want that nasty predator to be able to see you and your new gun, so you’d better make sure it’s “decked out in Mossy Oak Brush Camo,” because with you wearing your Mossy Oak Brush camo pants, and Mossy Oak Brush camo shirt, and your Mossy Oak Brush camo face mask, your R15 VTR Predator will blend right in out there in the fucking suburbs where you live.

Oh! Let’s not forget your shooting gloves, because Remington has told us the Magpul Trigger Guard is “V”-shaped for better use with gloves, so let’s head on over to Cabela’s, where we can pick ourselves up some Oakley Factory Light Tactical Gloves, because, you know, we’re going to be going all tactical and shit out there in the suburbs, and what we need is some shooting gloves that feature “lightweight ribspan construction which allows full mobility while compression-molded index panels protect fingers. Abrasion-resistant, ventilated AX Suede™ palms. Extra panel on thumb knuckles for hammer protection.”

Thank god for those “compression-molded index panels” to protect our fingers, huh? And how about those “extra panels on thumb knuckles” to protect us from misbehavior by any “hammers” we come into contact with.

And don’t you know we’re going to want bullets with some serious stopping power, so let’s let Remington tell us what its High Terminal Performance Copper Centerfire Cartridges will do for us. “The Barnes TSX bullet is precision engineered with four cutting petals that deploy at impact to inflict enormous terminal damage along with deep penetration and the kind of integrity only a one-piece bullet can deliver.” Thank god for that. We wouldn’t have it any other way with our bullets, would we? I mean, why go out there shooting your R15 VTR Predator unless you’re going to fire a bullet that inflicts “enormous terminal damage along with deep penetration.”

This is the kind of shit that’s being sold in gun stores all across the land. High-powered rifles that shoot enormously deadly bullets capable of killing human beings the way that 19-year-old shooter killed 17 human beings this week at a school in Florida. In many of these gun stores, you can buy your gun in the front room, and then take it out back to the indoor firing range where they’ll set you up to shoot the goddamn thing. And you know what they’ll give you to shoot at? A human silhouette target. Not an old-fashioned bull’s-eye, or a depiction of a little squirrel or a rabbit, or even a deer. No, the most common target in use today on firing ranges is the human silhouette target.

You want to know how fucking insane this is? I grew up in an Army family, and I was around guns all of my young life. My brother and I belonged to the NRA and went to an NRA rifle competition on Saturday mornings where we fired .22 rifles at bull’s-eye targets. Our father took us hunting with single-shot 20 gauge shotguns we were given for Christmas when we turned 14. But I it wasn’t until I was 18 that I was handed a rifle — in this case the Army’s M-16 — that would fire more than a single round without manually unloading, reloading and cocking the rifle to fire again. And I never saw a goddamned human silhouette target until I was on a United States Army firing range with an Army-issue M-16 in my hands and a bunch of human silhouette targets downrange.

You want to know why? Because the M-16 I was issued was designed to kill human beings and nothing else. Not rabbits. Not squirrels. Not deer. Not wild boar. Human beings. It was designed to fire semi-automatically, every time you pulled the trigger, and to fire 30 rounds out of its magazine before you had to reload. It was also designed to fire fully automatically — to fire continuously with a single trigger pull. You know why the M-16 was designed that way? Because it was made to shoot at enemy soldiers who were shooting at you. The idea behind the M-16 was to give soldiers a lightweight rifle that could be fired rapidly and accurately with a low-recoil so they could deliver superior firepower on the enemy and kill more of him than he killed of us. That’s the way you fight a war. You kill enemy soldiers. The way you win a war is to kill enough enemy soldiers that they throw their hands up and surrender. You do that with superior firepower. They designed the M-16 to deliver such firepower — to kill enemy soldiers in order to win wars. They put us on Army firing ranges with Army-issue M-16’s shooting at human silhouette targets to practice killing human beings.

Today you can walk into any gun store and plonk down about $1,200, the cost of the aforementioned Remington R-15 VTR Predator, and you can walk out with a copy of the Army killing machine that is the M-16. It will do everything the M-16 was designed to do except fire on full automatic, but don’t you worry about that. You can buy a goddamned “bumpstock” of the type used by the Las Vegas shooter to murder 58 people and wound another 500, and your goddamned Predator will fire effectively full-auto.

You see where I’m going with this. These stores are selling military-grade, military-designed killing machines to civilians. They’re selling imitation military camo outfits to them, and they’re selling imitation military-style “shooting gloves” to them so they can keep their fucking pinkies safe from “hammers,” and they’re designing trigger guards so they can be used with the goddamned military-style “shooting gloves” because . . . well, help me out here, will you? Why the hell has it come to this? We’ve got a whole country full of civilians who want to walk into civilian stores and spend hundreds of their dollars so they can buy military-grade killing machines and get dressed up in camo like they’re in the military. In the case of that loon in Las Vegas, Nevada; the loon in Orlando, Florida; the loon in Aurora, Colorado; the loon in Sutherland, Texas; the loon in Newtown, Connecticut; and now the loon in Parkland, Florida — they’re walking into gun stores and getting legally outfitted with enough lethal military firepower to kill a total of 188 Americans and wound a total of 662.

Well, I’ve got some advice for you gun nuts out there, all of you great big macho types who want to buy stuff like the Remington R15 VTR Predator and the Remington Barnes TSX bullets with four cutting petals that will “inflict enormous terminal damage along with deep penetration.”

Go down to your local recruiting station and join the fucking Army. They’ll give you a rifle for free, and all the deadly ammo you want, and they’ll train you with human silhouette targets, and they’ll send you over to Afghanistan, or Iraq, or Syria, or Niger, or some fucking hellhole where there are guys with guns very similar to yours who will be good enough to shoot at you, so you can shoot back at them and kill them, and then if President Trump feels like it, he’ll order up a big fancy military parade for you, and you’ll march down Pennsylvania Avenue. Meanwhile, put your goddamned R15 VTR Predators in a gun safe somewhere and stay the hell away from our schools, movie theaters, concerts and churches.