At "ground zero" for dog racing, Florida moves toward change

Most states ban the sport, but in Florida, greyhounds still face a different fate 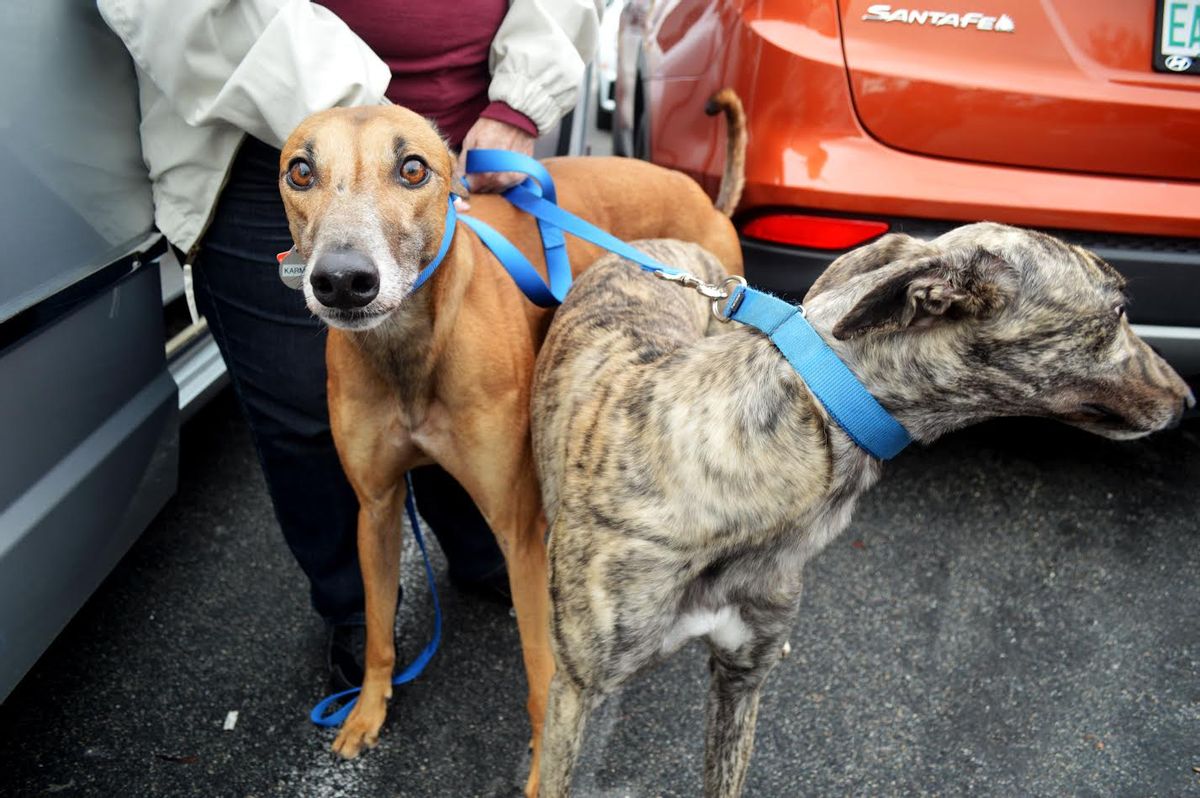 Nearly 25 years ago, Linda Lyman’s neighbor brought over the dog that changed her life. Back then, owners gave greyhounds away to people who hung around the track. Lyman’s own dog had just died, and she found out she liked the greyhound temperament: gentle, yet bigger than many other dogs – on average 60 to 80 pounds – with hardly any hair.

Lyman, a Tampa native who founded Bay Area Greyhound Adoptions in 2004, wanted to own a greyhound, but there were no adoption groups in the area at the time. She eventually found someone who owned a farm in Ocala and kept some retired greyhounds on it.

“The first dog I looked at, I brought home,” said Lyman. “I got into this because I adopted a greyhound and thought he was the best dog in the world.”

The earliest greyhounds arrived in the United States around the late 1800s. Their original job: catch jackrabbits in the Midwest. Soon, people figured out the sleek greyhounds' speed and started to race them.

The dogs were eventually taught to chase mechanical lures attached to rails of an oval track. Because of these races, public opinion on the dogs shifted. People began to view the dogs as mean, aggressive and hyper. Lyman said greyhounds possess a completely different demeanor than most people think.

“Greyhounds are calm,” she said. “They [need] less exercise than many other dogs.”

Forty states have banned greyhound racing. It’s only legal in six. And of the country's nineteen greyhound tracks still in business, twelve are in Florida, the first state to allow pari-mutuel wagering on greyhounds, back in 1931.

“Florida is ground zero,” said Theil. “There’s really been a significant debate in Florida for about a decade.”

In 1996, Florida passed a bill to allow anabolic steroid use in greyhounds, and it only began to mandate tracks to report greyhound deaths in 2013. Since then, there have been nearly 400 reported deaths.

The positive urine samples, the judge ruled, had been collected by an “unadopted rule” from the official 2010 manual.

“The people we work with,” said Lyman, whose organization gets dogs directly from kennels and owners, “we just don’t see that kind of really bad stuff.”

The animal welfare aspect is often cited by activists, but the main reason greyhound racing still exists in Florida is because the state’s pari-mutuel contracts “couple” greyhound races to other forms of gambling.

“Some of our attempts to help the dogs have been caught in the crossfire,” said Theil.

At its peak in the early '90s, greyhound racing constituted a multi-billion-dollar industry. It’s now in decline, but the state still requires gambling outlets to hold dog racing permits if they want to offer other forms of gambling such as poker rooms. So, greyhound racing remains legally tied to the state’s interest.

According to a 2015-16 report, pari-mutuel wagers have “resulted in $4.38 billion in state revenue” since 1931. But the report shows these contracts may be outdated as “In most recent years, pari-mutuel handle has steadily declined.”

Lyman said the industry decline has led to better treatment of the dogs. The less profitable tracks shuttered, which led to fewer dogs bred to race.

When Lyman first started greyhound rescue over two decades ago, she said, a kennel would close, and scores of dogs needed to be saved.

“You’d go get all your volunteers together and get as many as you can,” she said, “and the others – I don’t know what happened to them.”

Lyman’s organization established a chapter in the Cape Coral, Ft. Meyers area, but, Lyman said, most of their dogs come from Derby Lane.

Lyman works full-time as a branch manager for The Florida Bar, a governmental evaluation program for lawyers. Other members of BAGA are retired or have more flexible schedules, Lyman said, so they often go pick up dogs and do home visits.

On a rainy, weekend day in Tampa’s Ybor City, one of the BAGA volunteers, Jodi Chemes, stood with a greyhound named Mack, who was ready to get adopted. Mack is a former “stakes winner,” which means he was a “good, good racing dog.” He also has two white lines on his lower back; scars from when he got tangled in a cord from his previous race owner’s curtain. He’s great with kids, said Chemes, fine with all animals except small dogs that are yippy who make squeaky noises, because “he thinks it’s a toy.”

Dogs from the track aren’t used to inside-the-house life. They’re not used to walking on a leash. They don't know how to walk on tile or up the stairs. They often walk into sliding glass doors or step right into backyard pools.

A greyhound costs about five to six thousand dollars to get to their first race, and a “good, good” dog – one in thirty or forty – could make up to $40,000. One BAGA dog, Lyman said, made over $100,000. But usually if they make money, it’s not a lot. And owners often lose money on the race dogs.

“I have always wanted to have a greyhound because they are so beautiful,” said Lazzara. “I know that their personality is docile and intelligent, all the components I’d like in a dog.”

Lazzara leaned down to pet Mack, who never barked. He snuggled up to her body. On that dreary day, he just wanted some attention.