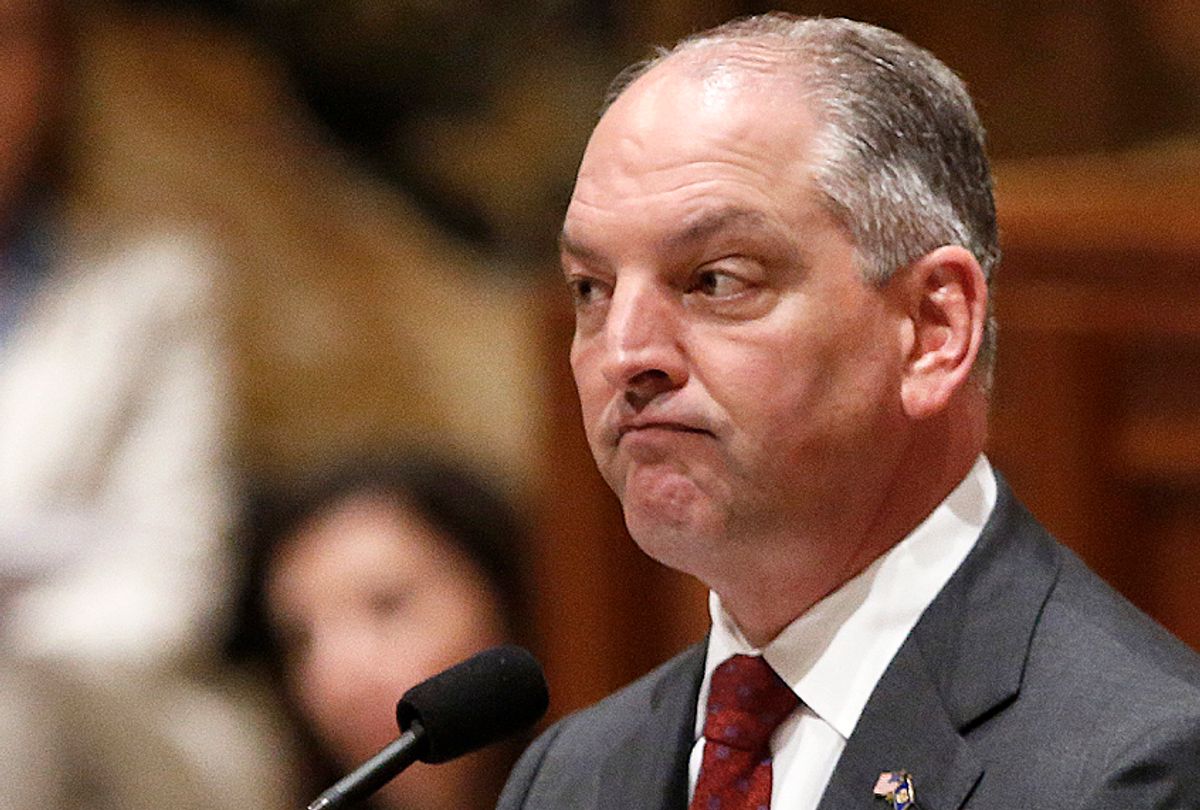 Louisiana’s next gubernatorial race, which occurs in October 2019, has already stacked a full line of worthy Republican contenders that could potentially unseat John Bel Edwards, the state’s first-term incumbent and the lone Democratic governor in the Deep South.

U.S. lawmakers, local lawmakers, statewide elected judicial leaders and business lobbyists are just some of the names that have, for a while, been on the Louisiana electorate’s mind for their next governor. The red state, which voted for Donald Trump during the 2016 presidential election, maintains a large base of conservative voters. With continuous impasse on policy between the Democratic governor and Republican majority, officeholders now see a prime window to move into the Governor’s Mansion.

U.S. Rep. Ralph Abraham, a medical doctor known endearingly by friends, family and staffers as “the Doc,” is one contender who has shown interest. U.S. Sen. John Kennedy, the folksy-yet-quippish ex-state treasurer whose colorful rhetoric alone has earned him scores of headlines across the country, is another. Though Kennedy hasn’t made clear whether he’s running, he has expressed interest. His rocky relationship with Edwards is particularly public, since many divisive dialogues are readily readable to anyone with WiFi through press releases from both offices (here, here and here).

Another name in the Republican pack is Attorney General Jeff Landry, a name that Louisiana politicos know well and aren’t surprised to find on the list of gubernatorial maybes. The judicial leader, who was sworn in right alongside the governor in January 2016, has earned a reputation for butting heads repeatedly with the executive superior, including on LGBT discrimination, criminal justice reform and Medicaid. Spectators know the statewide elected officials, who have already filed multiple lawsuits against one another for various reasons, are unabashedly uncompromising rivals in public policy.

Curiously, Landry recently advocated for Virginia-based conservative television personality Laura Ingraham to run for governor of Louisiana. “Laura Ingraham would make a great governor,” Landry wrote on his Facebook page. “LIKE if you agree!” Ingraham said during a recent keynote speech at an annual meeting for the state’s most powerful business organization that that she might buy property in Louisiana and run for the office.

State Sen. Sharon Hewitt, an engineer who recently challenged the governor’s workplace policies in light of the deputy chief of staff’s alleged sexual misconduct, is also on the watchlist. The state lawmaker is also a member of the state’s Senate Finance Committee and has been one of many legislators to criticize the governor on his allegedly inefficient efforts to shore up Louisiana’s ongoing, multi-million-dollar budget shortfall.

U.S. Reps. Garret Graves and Steve Scalise, the latter of whom is still recovering after being shot in the hip during a charity baseball game practice in Virginia this past summer, have been named by hopeful members of their Republican party as possible runners-up. But both have made clear their disinterest in the position.

Incumbent Democrat Gov. John Bel Edwards, whose public approval ratings exceed the 60s (notably high, especially considering his party affiliation and frictional relationship with colleagues), is expected to vie to remain in his seat versus a crowd of powerful Republicans, including multiple U.S. lawmakers with strong backings and continued criticism against Edwards’ politics since he took office in 2016.

Some political experts argue that a Republican governor, despite identifying with the state’s Republican majority in the legislature and electorate, would not automatically solve the leadership’s stagnancy, because Louisiana Republicans aren’t unified, especially on fiscal issues. But the current government’s infighting is primarily attributed to partisanship, a mentality that veterans argue was exacerbated during the tenure of the preceding governor, Republican Bobby Jindal.

The current governor’s tenure has been a phenomenon of sorts since the start. While Gov. Edwards is a Democrat pushing many liberal values, including LGBT rights and sweeping criminal justice reform, he is still unbending in his pro-Second Amendment and pro-life beliefs. But it all began with the gubernatorial race in 2015, which was considered legendary (as many Louisiana gubernatorial campaigns are) due to the then-state lawmaker’s victory over his Republican rival, U.S. Senator David Vitter. Political experts argue that Vitter lost the gubernatorial race because his underdog opponent was able to unearth a years-old prostitution scandal against him. Some pundits compare the 2015 Louisiana governor’s race to the recent Alabama Senate race between Roy Moore and Doug Jones, arguing both Republicans lost because of past sexual misconduct that still haunts them today.

Whether another sex scandal pops up in the 2019 race remains to be seen. Republican opponents already have one aforementioned sexual harassment case against Gov. Edwards’ staff. But the biggest issues will be fiscal — the state budget is tied up annually in specific dedicated funds, which forces lawmakers to make cuts in undesirable places, such as healthcare and college scholarships. This coming year, the state faces a $1 billion fiscal cliff. The governor and his legislative colleagues have struggled for the past couple of years in seeing eye-to-eye on how to solve the budget crisis, and it can be expected that the lack of found solutions will be turned into weapons against him on the campaign trail.