Celebrity monomania: Maybe Trump and Oprah aren't as different as we think 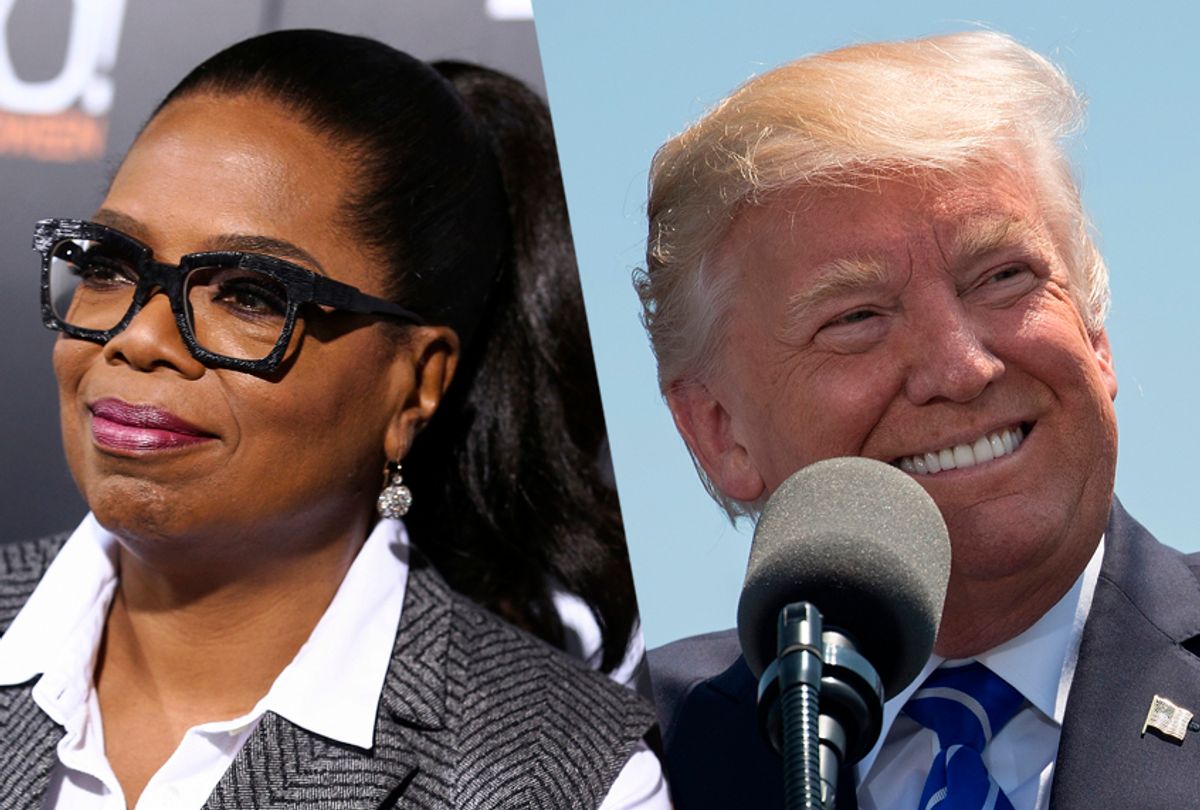 "A Short History of Celebrity" (2010), by Fred Inglis, is a marvelous book. In it, this British student of culture accounted for the success of “chat show” host Oprah Winfrey: an uncanny ability to be “responsive to feeling” with “unaffected tears” and “moral consistency.” Inglis seems to know what Americans like – it’s odd, but non-American imports are often better observers than Americans themselves. “She turns private lives into public spectacles ... but her touch and tact are such as either to leave what is private inviolate or, in rendering it public, join it to the privacies of her audience’s feelings, thereby making privacy communal.” Reading these lines makes one yearn for the cultural moment past when it was still possible for self-exposure to serve moral ends.

It’s humbling to think about the way history works. National leaders, devastating conflicts, even entire decades, are dismissed – too much to remember, nothing left to feel. Not the Civil War, of course, because its reverberations are still felt viscerally in the culture wars of our racist present. But believe it or not, 9/11, the war on terror, and both Bushes will warrant a single pithy paragraph in the texts today’s toddlers are assigned in high school. In emotional terms, it will mean next to nothing for them. Soon after, it will all have been forgotten, like the No. 1 “nonfiction” bestseller 20 years ago this month, "Talking to Heaven": “A world-famous medium discusses communication with the other side.”

But that shouldn’t really surprise anybody, because we’re seeing the emotional content of every day’s news fade from view faster and faster. Maybe that should be tomorrow’s lead news story. (Wait, you’re saying gay marriage was divisive at one time?)  Yet what if people are still debating gender equality and abortion restrictions in 50 years – is that conceivable? (Pardon the pun.)

OK, fear is an unbanishable part of politics. Always was, always will be. That said, how will future citizens reckon with the inane tweeting democracy of our time? Surely some university faculty in 2060 will graduate (with distinction) the author of a dissertation called “Twitter and the Fragmentation of Personality in America, 2012-2028."

Ideals, dreams and fantasies have their place in every person’s everyday life. That’s what helps us get by. Novels and movies are positively escapist. But we seem to be reaching the point in our national culture where even the most ardent of idealists no longer hold onto their dreams for more than history’s nanosecond. Is it because unreality goes by the name of reality? Surely that sinister unreality is militant. It goes without saying that truths about the past are easier to agree upon than truths about the present, but falsehoods of the present have never been quite so glaring, or so it would seem. Climate change denial is a prime example. Ignorance is excusable – American medicine desperately hung on to “bleeding the patient,” before proven forms of intervention altered the medical landscape. But science is, if not sacred, at least smarter than a lobbyist’s talking points.

Here’s what we’re not learning about the Pavlovian tendencies in American society. We who care about the future have done too little analysis of the susceptibility of the electorate to the sensation of the moment. Politicians rarely present themselves as experienced problem-solvers; they have to be dragon-slayers, saving everyone from a made-up threat. A problem-solver has a legislative program to improve public education; upgrade safe, efficient, affordable transportation options; maximize the application of public health and environmental initiatives. But “improvement” is not a shiny object. Competence isn’t titillating.

Now that big money buys elections legally, the crassness of politics won’t be changing anytime soon. We do not require legitimate footnotes at the bottom of candidates’ statements. Slick ads do it all. Simply because of their “stature,” Americans have elected military heroes to the presidency who had no previously articulated plan to do good for the republic. Andrew Jackson, William Henry Harrison, Zachary Taylor, Ulysses S. Grant and Dwight Eisenhower led invading forces and captured the popular imagination – and that was enough. (Gen. James A. Garfield might be the exception, as a bright and discerning political thinker – but who cares, right?) Celebrity rocks.

Beyond celebrity lies monomania. Monomania is a historical term referring to a cognitive state, a pathological compulsion or preoccupation in an individual or collective mind. It can afflict anyone, any society. In politics, it can decide what overarching, overwhelming danger to the general safety and happiness of a people exists at a given moment. It can be something exotic and impossible to turn away from, or it can be entirely banal. So long as it hits its target, and keeps coming back for more.

Andrew Jackson was a lawyer and judge who literally favored arbitrary determinations over disciplined learning and reasoned judgments. He and his savvy political handlers got a whole lot of people to see America through the general’s eyes and, after his death in 1845, to regard his presidential legacy as the spirit of resistance to elitist rule. An entire era has been conveniently labeled “Jacksonian democracy.” People who adored “the Hero,” as the seventh president was widely known, somehow convinced themselves that broad social uplift required a singular spokesman. Whether this is to be considered idealism or mass delusion, the fact is that the textbook designation of the monolithic president was granted a long historical life.

The “Age of Jackson” had its thinkers, but Jackson was not a thinker. He was a destroyer. He saw in black and white. He was not control but randomness, and he thought he was the best at everything. Donald Trump sits at a frequently paper-free desk with Jackson’s portrait behind his head – and with no idea who the historical Jackson was or wasn’t. Jackson was “in touch with” common folks and resentful of intellectualism. Which was apparently good enough for a majority.

The monomania of the present defies reason too. Initially, perhaps, as many have reported, 2016 marked the defection of the people who were bored with candidates predictable and conventional, who wanted to be liberated from the usual shattered promises and denied expectations. (“Why not give the successful businessman a chance?”) But the fact is, it won’t matter in the future how the incoherent braggart and self-serving disrupter of norms got voted into office. What will matter is that the United States government either started paying attention to real things, or lost track of time and ended up mourning the loss.

The bizarre intensity of our peculiar moment is no more striking, historically speaking, than the emotionally insistent world was post-9/11 (“when everything changed”). Then it was anthrax and handheld weapons that unleashed terror and claimed horrified imaginations. Meaning it’s not just Trump who is consumed with his own self, who personalizes events large and small, real or pretend. Do you watch cable news? America is consumed with itself. Each new manifestation of a threat to what is socially constructed as “our precious freedoms” sends shock waves over the airwaves. (Take a break and watch NatGeo, where the Earth still contains abundance and it’s not human.)

The apparent threats to “our precious freedoms” are how we, as a fractured culture, describe mortal terror. Do we need to be constantly suffocated? We, America, are in retreat, not from world leadership, but from a clear conscience. We’ve become more hysterical than usual. More self-righteous, it would appear at the moment. More easily diverted. It’s a time of inquisition, of stalking, of leering, of pointing fingers. It’s all around us. You can blame the internet, or the cadaverous clown who sucks the air out of the room with or without a troupe of chattering reporters and their fuzzy microphones and invisible sound trucks.

It’s the manufactured tension between the clamorous and the compliant that makes the news cycle so obnoxious. We sweat the minor things. There are no problems to solve with so much inconsequential stuff that has to be endured first. Real problems are too hot to handle – or could it be they’re actually too self-evident to handle? Try poverty, try poisoned air and food, try extreme weather – try them all at once. It’s like we’re watching a fireworks display that doesn’t end, where the sensory deprivation in the surrounding sky prevents you from stopping the guy who’s stealing your backpack with all your valuables in it.

What’s the alternative? To become more prudent, right? “Prudent” is the watchword no one’s watching. “Competent” is no longer the prime selling point in a candidate. Don’t even start with “personal virtue.” Everyone gets a mulligan. “You get a mulligan! And you get a mulligan!” We know it’s hard to conceive, but maybe the name “Oprah” will be meaningless in an America of the near future. So is it too much to hope that history books will pretend Trump never happened?