"Trickle-down" theory should have been junked by 1988, but Republicans still claim to believe it. Deluded or lying? 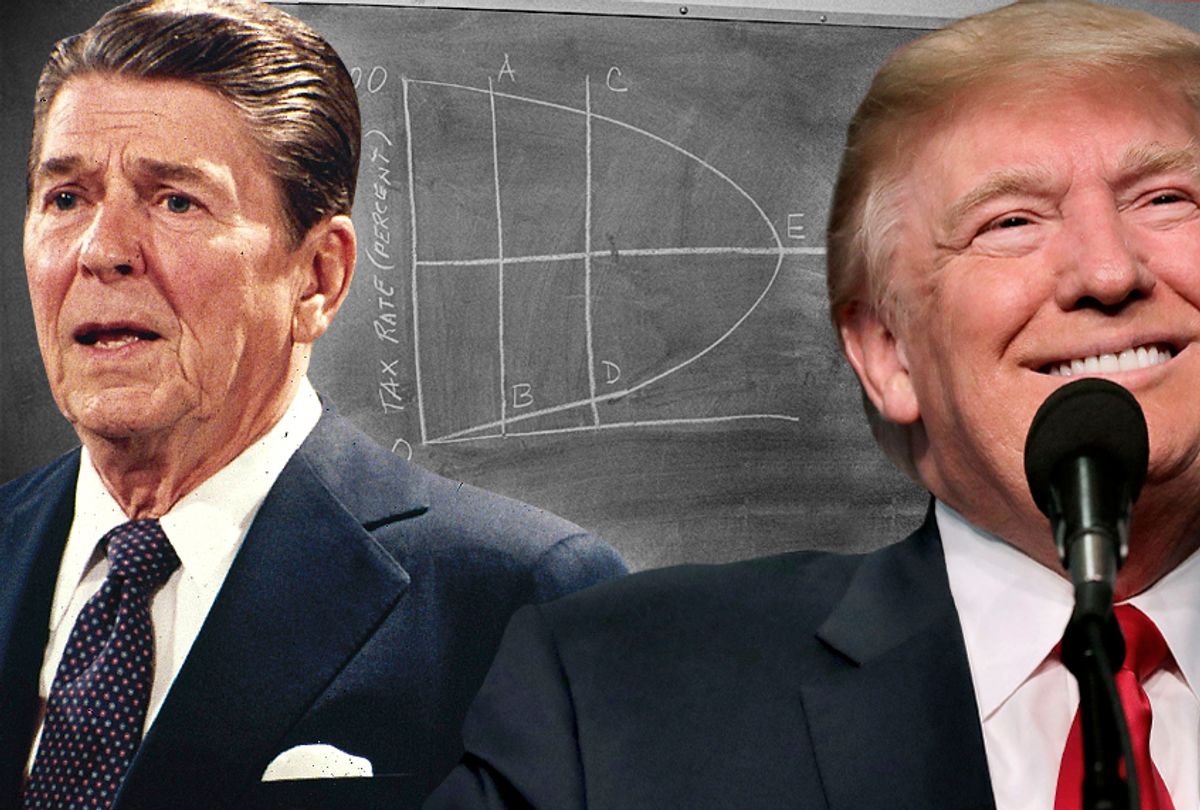 The dogma of supply-side economics has dominated American politics for nearly four decades, even as the evidence has discredited the right-wing ideology and its central tenets time and again. Trickle-down economics should have been cast into the dustbin of history way back in 1988 at the end of the Reagan years — during which the national debt nearly tripled — but 30 years later it is still the dominant ideology in Washington (at least within the party that currently controls every branch of government).

Whether most of those who still espouse the supply-side doctrine genuinely believe in its claims, however, is doubtful. Though there are surely some ideologues who are still convinced that slashing taxes for the wealthy will increase revenues and that the newly-created wealth will trickle down to the majority (rather than exacerbating inequality, as it always has), there's a much better explanation for most proponents of supply-side theory: They are lying. Indeed, the past few months have basically confirmed what those on the left have long maintained: Supply-side theory is simply a pretext for right-wingers to wage a class war on behalf of their corporate donors and billionaire benefactors.

As The New York Times editorial board put it last week, “recent actions [by Republicans in Congress] have revealed that the real game is to cut taxes on businesses and the wealthy, and use the resulting deficits as a pretext for cutting programs like Medicaid, Medicare and Social Security that benefit the poor and the middle class.”

After eight years of pretending to be “fiscal conservatives” and “deficit hawks” while Barack Obama was in the White House, congressional Republicans have all but given up the act, passing a budget deal last week that will increase spending by over $300 billion. More than half of that increase will go to the already bloated defense budget, which is currently more than the military spending of the next eight countries combined.

Of course, this came just a few weeks after the passage of the Republican tax bill, which is estimated to add nearly $1.5 trillion to the deficit over the next 10 years. All told, the deficit will increase to about $1.19 trillion in 2019, according to the nonpartisan Committee for a Responsible Federal Budget. This is up from the $585 billion deficit during Obama’s final year in office (under Obama the deficit was reduced by nearly two-thirds, from its peak in 2011 at the tail end of the recession). What we are witnessing now is the continuation of a trend in American politics that I summed up in an article back in 2015:

Over the past three decades, the Republican Party has followed a familiar strategy: get elected to executive office by preaching fiscal responsibility, make a complete mess of things fiscally, and then, when a Democrat comes in to clean up the mess, blame them endlessly for not fixing it fast enough.

This was the case during the Reagan era, the Bush era and now the Trump era. While Reagan ran on fiscal conservatism, his policies were anything but that, and the national debt increased by almost 200 percent during his eight-year presidency — the highest percentage growth since Franklin D. Roosevelt. (Ironically, FDR also ran as something of a fiscal conservative before becoming the father of the New Deal.)

In the '90s the deficit declined, and George W. Bush inherited a surplus from the Bill Clinton era, which was quickly squandered by tax cuts for the rich combined with a soaring defense budget. (Sound familiar?) Predictably, this worsened income and wealth inequality and blew up the deficit, and Bush not only left Obama with an economic recession and a catastrophic war, but a historic deficit as well.

In the eight years that followed, Republicans conveniently suffered from selective amnesia, and once again became “deficit hawks” who proclaimed the national debt as the major crisis of our age. “Our nation is approaching a tipping point,” warned Paul Ryan back in 2011, while the Tea Party movement formed in supposed opposition to Obama and the growing debt.

Though Donald Trump was an unorthodox Republican from the start, he continued the GOP tradition of fear-mongering about the debt and feigning fiscal responsibility. One could see that he was not at all serious about the issue when he said in 2016 that he could eliminate the entire debt “over a period of eight years” by negotiating new trade deals. Now it is equally clear that the Republican members of Congress who masqueraded as the fiscally responsible adults in the room for eight years were as fraudulent as their new president.

The doctrine of supply-side economics would no longer be worth debating if its underlying ideology didn’t still have such influence in Washington and America. As long as powerful interests continue to propagate the myths that Reagan first espoused 30 years ago, however, no amount of evidence is likely to end this debate. Supply-side economics is the ideology of corporate America and the billionaire class, and it is has been consistently employed to wage class war on working people over the past four decades.

As the deficit soars to historic levels in the years to come, we can be certain that economic inequality will soar along with it, while the wealth of the top 0.1 percent will also reach new heights. Until the dominant ideology of the ruling class is truly challenged by an ideology that puts the interests of working-class and middle-class people first, one can expect this travesty to continue.