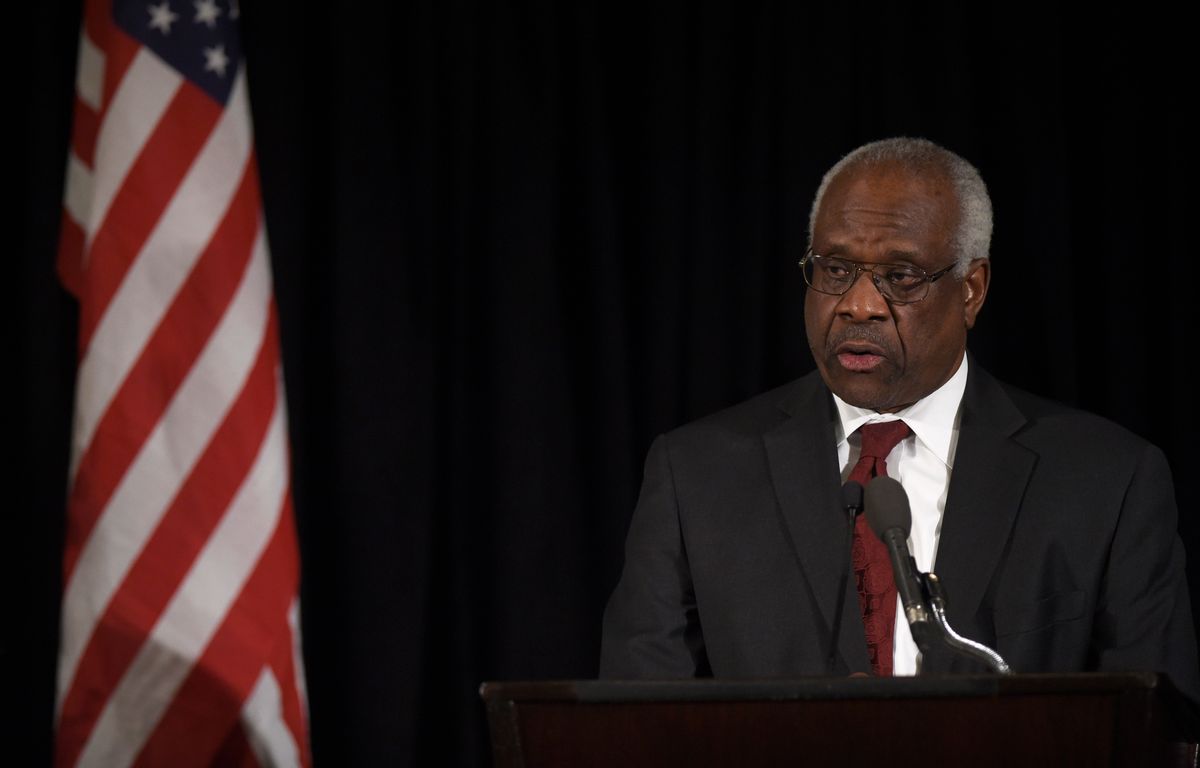 In a dissent that could have been ripped from the NRA's playbook, Supreme Court Justice Clarence Thomas claimed that gun owners are being treated unfairly by America's court system, in a dissent on a gun-related case on Tuesday, one that got many things about our current gun control debate woefully wrong.

"The Second Amendment protects 'the right of the people to keep and bear Arms,' and the Fourteenth Amendment requires the States to respect that right," Thomas wrote in a dissenting opinion in the matter of Silvester v. Becerra, a case the court said it won't review. In that case, the Supreme Court rejected arguments that California's 10-day waiting period for gun purchases violated the rights of citizens whose background checks do not require as much time. While Thomas was quick to quote part of the Second Amendment in the opening of his dissent, he conveniently neglected to provide the full quote:

A well regulated Militia, being necessary to the security of a free State, the right of the people to keep and bear Arms, shall not be infringed.

Thomas' omission of the first part of the quote is noteworthy, since it removed the context behind the passage of the Second Amendment. Although there have long been debates about the degree to which the founding fathers wanted that amendment to protect firearm rights, there is no question that the contemporary absolutist interpretation didn't become popular until the 1970s.

Thomas also used his dissent to claim that gun owners in America were being persecuted by their judicial system. After describing the court's upholding of California's 10-day waiting period as "symptomatic of the lower courts’ general failure to afford the Second Amendment the respect due an enumerated constitutional right," he proceeded to complain about various rights that he opposes but which have been supported by the Ninth Circuit.

"The Ninth Circuit invalidated an Arizona law, for example, partly because it 'delayed' women seeking an abortion," Thomas complained. He also pointed to a case in which "the Ninth Circuit struck down a county’s 5-day waiting period for nude-dancing licenses because it 'unreasonably prevent[ed] a dancer from exercising First Amendment rights while an application [was] pending.'" The Supreme Court judge also took issue with a case in which "the Ninth Circuit held that laws embracing traditional marriage failed heightened scrutiny because the States presented 'no evidence' other than 'speculation and conclusory assertions' to support them," adding that laws which discriminated against same-sex couples "reflected the wisdom of 'thousands of years of human history in every society known to have populated the planet.'"

Overall, Thomas said that the problem was that the Supreme Court had turned the Second Amendment into the "Court’s constitutional orphan. And the lower courts seem to have gotten the message."

Below is an infographic from FederalCharges.com, which shows a brief history of gun laws in the United States. Contrary to Thomas' belief, guns haven't always been so widely available.