In Trump's epic weekend meltdown, he denies his past denials — and desperately searches for someone else to blame 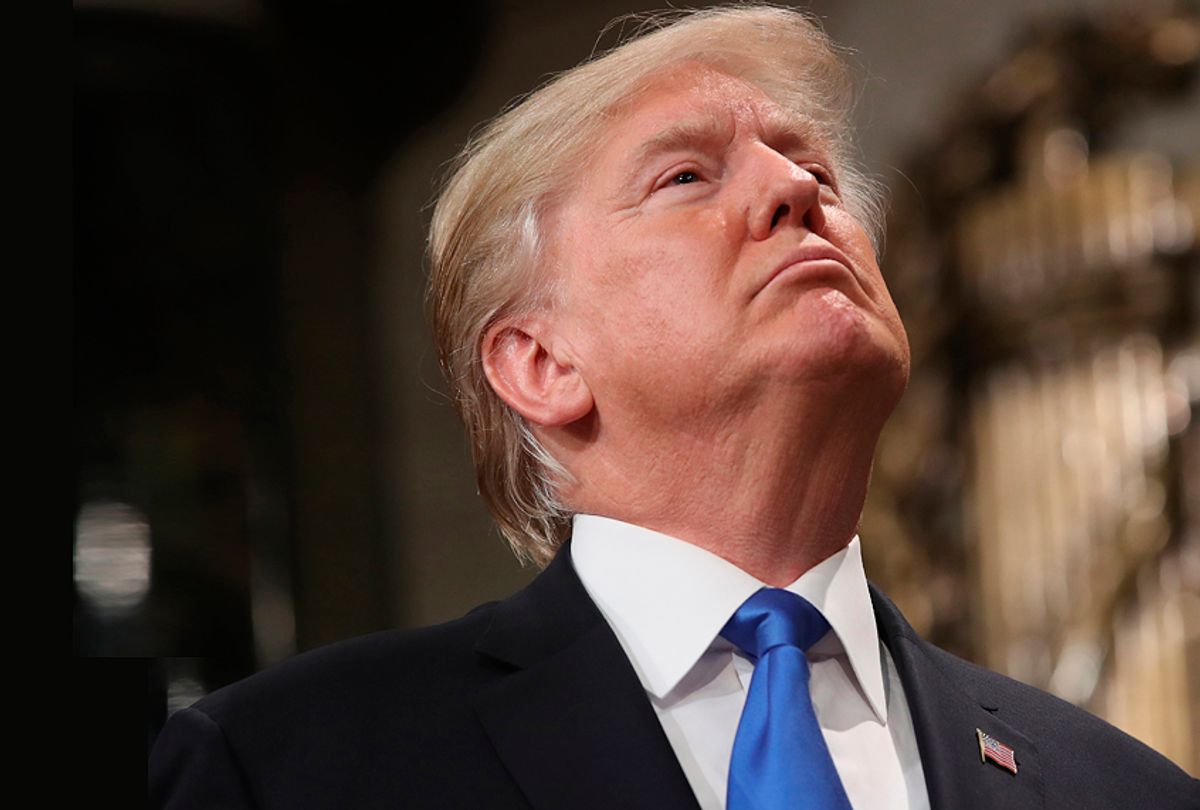 Last Friday, Justice Department Special Counsel Robert Mueller handed down grand jury indictments of 13 Russian nationals for interference in the 2016 presidential election. It detailed a campaign to use American social media to disparage Hillary Clinton and Republican candidates while boosting Donald Trump. These indictments will probably never result in a trial, since it is not likely the Russian government will feel moved to extradite these people to face the music for their alleged crimes. After all, on the night Trump won the election, senior Russian government officials were reportedly celebrating wildly.

Legal analysts have been poring over the indictment and have as many theories as there are Russian bots about what it says about the overall investigation. There is something for everyone in it, from the diehard Hillary fans who still feel raw over the Democratic primaries to the never-Trumpers on the right who know their instincts were correct. The evidence shows that a Russian troll farm used social media to spread propaganda and organize events, spending millions on the program and reaching millions of American voters.

The indictments were announced by Deputy Attorney General Rod Rosenstein, which was seen as a sign by many commentators that he wanted to take ownership of the case and ensure it was taken seriously. Rosenstein's message was clear: Here is proof that Russians interfered in in the 2016 election, and did it to help Donald Trump win.

There can be no more debate about whether it happened. The only question now is what effect it had on the exceedingly close outcome. That's a debate that will never be truly resolved, although there are experts who make a pretty convincing case that the effect of Russian meddling was substantial.

Rosenstein also went out of his way to state that these indictments do not assert that there was any collusion with the Trump campaign, which was immediately seen as vindication by his supporters. That's premature, to say the least: The hacking of Democratic Party and Clinton campaign emails, and the curious timing of their release -- as well as all those meetings with Russians -- were not addressed. Nonetheless, the entire Trump machine immediately went into high gear, saying "I told you so" and declaring that the president and his campaign were off the hook.

Fox News ran the story as a Trump victory on a loop, and the president tweeted:

(Actually, Trump was known to be anticipating a run for president in 2014. It was even assumed to be a done deal by certain Russians he'd worked with on the 2013 Miss Universe pageant.)

Unfortunately, Trump's celebration was dampened by the necessity of visiting victims of our latest bloody school slaughter, which meant that he couldn't spend his holiday weekend on the golf course as he'd planned. So he stayed inside and watched TV with his sons Eric and Donald Jr. instead, and they got "riled up" by the media coverage, precipitating one of the most unhinged tweetstorms we've seen from the president yet.

Trump blamed the Democrats for gun violence because they hadn't been able to pass gun safety legislation when they had a majority. (Mitch McConnell led the filibuster against the bipartisan bill after Newtown.) He claimed that the investigations were playing into the hands of the Russians. He chastised Gen. H.R. McMaster, the national security adviser, for saying it was "incontrovertible" that the Russian government had interfered in the election without adding that there was no collusion with the Trump campaign. He capped this all off by saying that "the only Collusion was between Russia and Crooked H, the DNC and the Dems. Remember the Dirty Dossier, Uranium, Speeches, Emails and the Podesta Company!"

Trump called Rep. Adam Schiff, D-Calif., of the House Intelligence Committee a "monster." He attacked Oprah Winfrey. In the low point of a truly alarming public tantrum, the president blamed the FBI and the Mueller investigation for the Parkland shooting:

But amid all the raving and the ranting, there was a significant shift in Trump's previous position. Now that there is real evidence of a Russian attempt to interfere in the 2016 election, he is claiming that he never called it a hoax in the first place:

There are, of course, dozens of examples of Trump insisting that the entire scandal was made up by Democrats as an excuse for their defeat. Here's one from a Time magazine interview:

More recently, After Trump met with Vladimir Putin he said afterwards that Putin told him he didn't interfere in the election, and that Trump took him at his word.

Now Trump has been forced to admit that this happened and that the Russian government was apparently behind it. Whether he realizes it or not, this presents a whole new set of problems for him.

Obviously, Trump has known about this since long before the election, when he started getting security briefings. He has been president for more than a year and he has done nothing about this. He has not held one Cabinet-level meeting about this issue, and according to the directors of his intelligence agencies has not told them to ensure it never happens again. In fact, Trump has not only obstructed the investigation into what happened, he has tried to stop congressional committees from doing anything to prevent future attacks. And then there are his repeated attempts to lift the sanctions imposed by the Obama administration, and his refusal to implement the ones mandated by Congress as punishment for the interference.

None of that has anything to do with allegations of "collusion." If he didn't think the Russia interference itself was a hoax, then what is his excuse for inaction? Even if you want to grant him the widely-held assumption that he is just a pathological narcissist obsessed about the legitimacy of his victory, this is a dereliction of duty and he's accidentally admitted to it.

But Trump being Trump, he's found a way to pass the buck. You could almost see the light bulb going off in his head when he tweeted on President's Day, “Obama was President up to, and beyond, the 2016 Election. So why didn’t he do something about Russian meddling?”

Our intelligence agencies all say this will happen again in 2018. Who will Trump blame then?