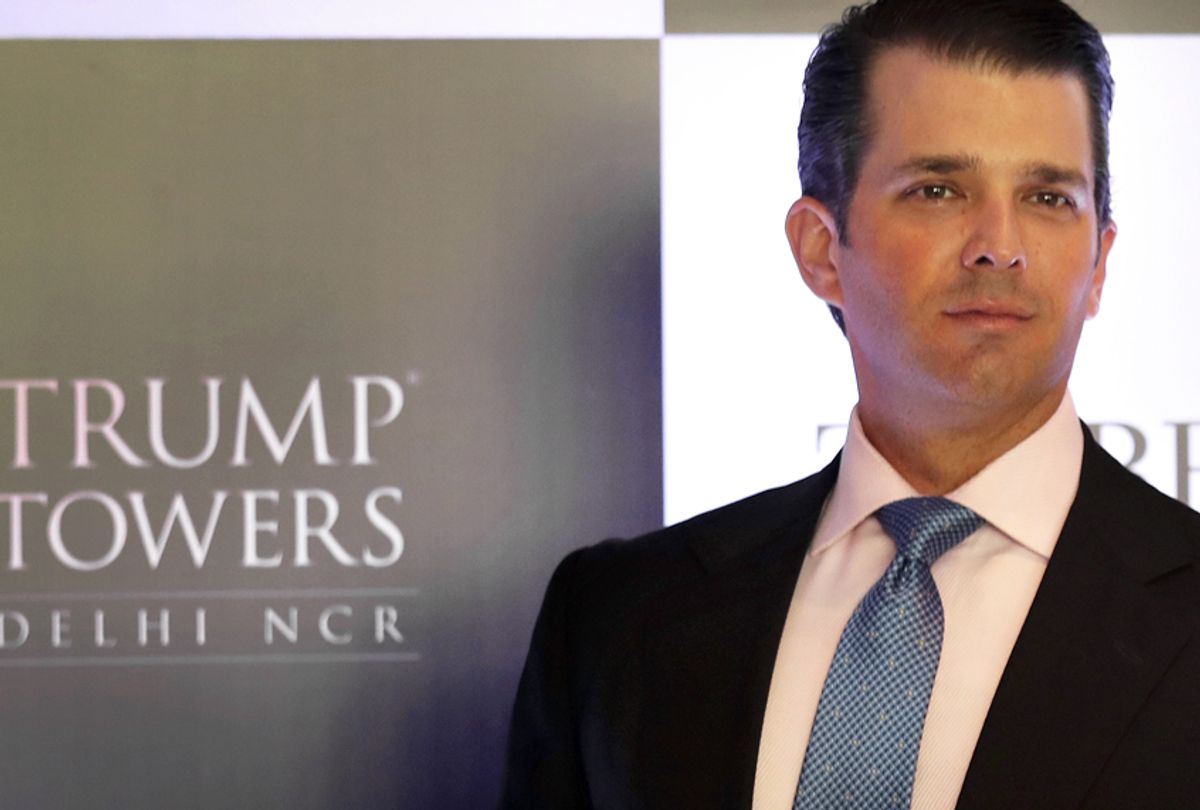 There's a lot going on with the Mueller investigation this week, with a previously unknown Dutch lawyer pleading guilty to lying to the FBI about his phone calls with Trump's deputy campaign manager and shady Ukrainians and all. These latest charges from the special counsel are among the most obscure we've seen yet: They seem to be connected to some ugly episodes that took place in Ukraine in recent years under the direction of Paul Manafort, who later wormed his way into the Trump campaign and is now under indictment. There is no clear indication of exactly where this is going, which is certainly intriguing. Stay tuned for more.

Meanwhile, President Trump is still tweeting away, pretending to care about gun violence (along very careful lines obviously dictated by NRA head Wayne LaPierre) and publicly calling out women who have taken offense to his odious habit of kissing and groping them against their will. Meanwhile, the battles within the White House over the inability of half the staff to qualify for the security clearances they need to do their jobs continue, with everyone wondering whether Trump will grant his son-in-law Jared Kushner a clearance anyway so Kushner can get on with bringing about world peace.

It's a busy time for the president, so it's got to be a relief that the family business is in good hands and he doesn't have to give it his full attention from the Oval Office. After spending the weekend egging on his dad's Twitter rages and advising him strongly not to give an inch on gun control, Donald Trump Jr. immediately jetted off to India to sell condos and access to the highest reaches of the U.S. government in the most blatant way possible:

The ads, which have run repeatedly in the past few days, herald the arrival not of the American president but of his eldest son, Donald Trump Jr., who is in New Delhi to sell luxury apartments and lavish attention on wealthy Indians who have already bought units in a Trump-branded development outside the Indian capital.

The Trump Organization had agreed not to do any "new" deals overseas during Donald Trump's presidency, but it's still working the ones that were in progress and overseeing the existing contracts and properties. This project in India was in the works during the campaign, which may help explain the unusual amount of time and attention Trump paid to the Indian-American community. During the transition, Trump stunned observers by inviting his business partners to meet with him at Trump Tower to chat about the new opportunities available to them. The New York Times reported on it at the time:

“We will see a tremendous jump in valuation in terms of the second tower,” said Pranav R. Bhakta, a consultant who helped Mr. Trump’s organization make inroads into the Indian market five years ago. “To say, ‘I have a Trump flat or residence’ — it’s president-elect branded. It’s that recall value. If they didn’t know Trump before, they definitely know him now.”

When I wrote about this for Salon back in November of 2016, it seemed absurd to think this might continue once the president took office. But since Trump had done nothing to divest himself of the business before he ran, as other candidates had done before him, it was clear he wouldn't be able to do so in any kind of orderly fashion after he won. Still, at the time it was hard to imagine just how blatantly corrupt the family would be -- and how little interest anyone would take in their massive conflicts of interest. After all, Trump had just won the election by tarring his opponent as "crooked."

When Don Jr. hit India on Tuesday, the first thing he did was pose for photos with Kalpesh Mehta, the same gentleman with whom the president posed back in November of 2016. He immediately stuck his foot in his mouth, as the Los Angeles Times reports:

Asked to compare India with China as a place to invest, President Trump's eldest son — and acting head of his business empire — told journalists: "As a businessman, I feel things here are substantially more aboveboard."

"I think the mentality of the people is the same," the Press Trust of India quoted Trump Jr. as saying. "I think there is probably little bit more honesty."

That might be fine for a businessman flattering his Indian partners, who see themselves as rivals to the Chinese. But the son of the president dissing China for being "dishonest" (as fatuous as that is coming from a Trump) carries a whole different meaning.

Trump Jr. says this is purely a business trip, but he will be giving a big policy address on Friday at an event with Prime Minister Narendra Modi and finance minister Arun Jaitley. Junior's speech is entitled "Reshaping Indo-Pacific Ties," which the State Department insists is just his personal view and has nothing to do with official American policy. You can imagine that the attendees might not understand that. He will speak right after the prime minister.

Oh, and Don Jr. also plans to attend lavish dinners to thank the Trump-brand condo buyers, which some people think looks like selling access to the White House by putting money directly into the family's personal coffers. This is, after all, a regular occurrence in the U.S. Just last weekend, Trump hobnobbed with the members of his exclusive Florida golf resort, asking them about the issues of the day. Those people pay $200,000 a year for the privilege of personally telling the president about their concerns. It's just how the Trump family rolls.

As Salon's Matthew Rosza reported on Tuesday, the billionaire scion went out of his way to compliment India for its nice poor people, who he says are very happy, unlike the unpleasantly solemn poor folks elsewhere in the world. It could have been worse. He didn't call India a "shithole," or at least not yet.

This week The New Yorker published an interesting story by Jeffrey Toobin about the ways the senior Donald Trump used his ownership of the Miss Universe pageant to advantage his business deals in various countries. The pageant didn't get great ratings and wasn't a big moneymaker in its own right, but it served Trump's purposes in other ways. For instance, he unilaterally changed the votes so contestants from nations with whom he wanted to curry favor would win, and would locate the pageant in places where he was trying to make branding deals. That's the Trump business strategy. His family-owned business is doing the same thing today, but rather than using beauty-pageant contestants as bait, it's using the United States of America.