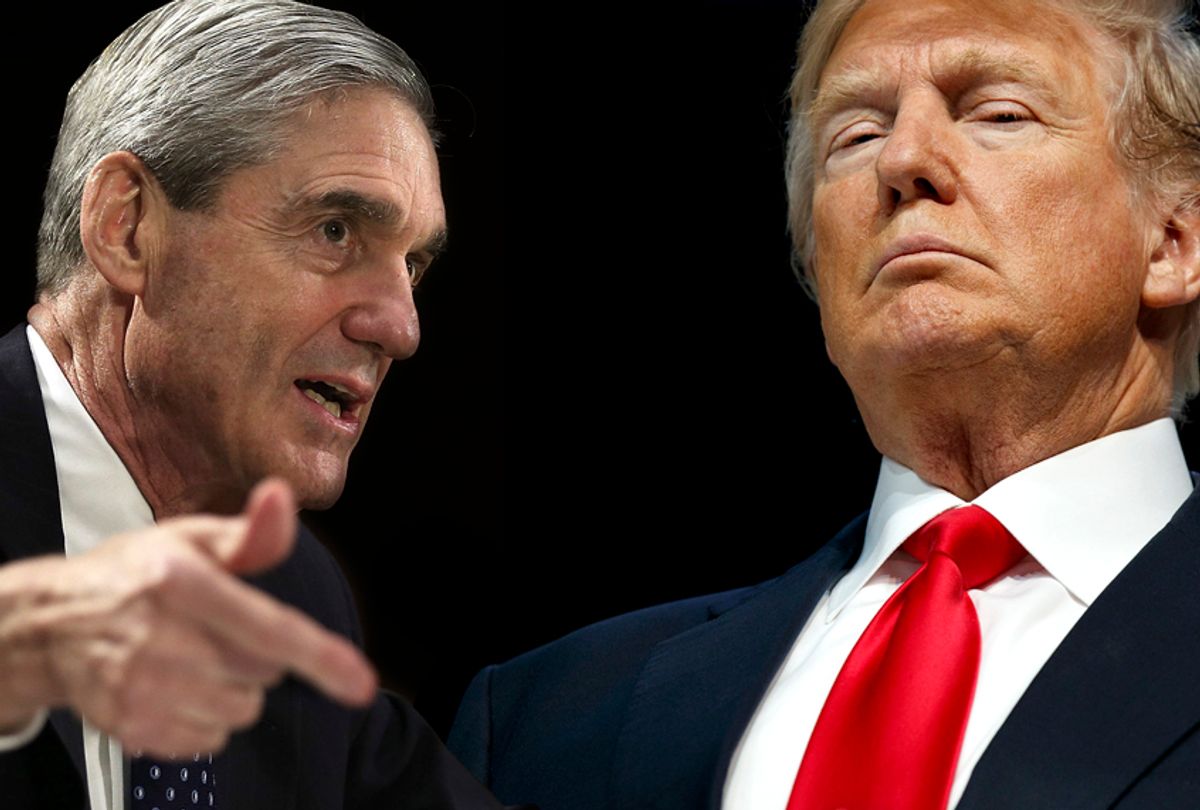 The indictment filed last week by Special Counsel Robert Mueller against 13 Russians makes the case that the interference in our national election in 2016 was a Russian intelligence operation run out of Moscow begun in 2013 and funded to the tune of as much as $1.2 million per month.

This nails shut the coffin on Trump saying that there was no "Russian meddling" in the election. There was more than meddling. Thirteen Russians are charged with a conspiracy to steal the election for Donald Trump. I've been wondering since Mueller was appointed what crimes he would find. He found some good ones. The indictment states that the United States has an essential governmental interest in running an honest and fair election for the presidency, and these 13 individuals, “knowingly and intentionally conspired to defraud the United States by impairing, obstructing, and defeating the lawful functions of the Federal Election Commission, the U.S. Department of Justice, and the U.S. Department of State in administering federal requirements for disclosure of foreign involvement in certain domestic activities."

And that's only Count One.

The indictment was announced at the Department of Justice by Deputy Attorney General Rod Rosenstein and is signed "Robert S. Mueller III, Special Counsel, Justice Department."

Mueller's name wasn't on any of the previous four indictments his office has brought in the Russia investigation. Rosenstein did not personally announce those indictments.

But this time Rosenstein and Mueller waved a red flag in Trump's face. The indictment shows that Trump has been lying to the American people that there wasn't any Russian interference in the election. By signing the indictment and announcing it at the Department of Justice, Mueller and Rosenstein threw down a legal gauntlet and said, let's see you fire us now.

They spelled out in the indictment the ways that the Russians conspired to interfere in the election of 2016 and help elect Trump and defeat Hillary Clinton. They did it with breathtaking bluntness and power:

"Defendant ORGANIZATION had a strategic goal to sow discord in the U.S. political
system, including the 2016 U.S. presidential election. Defendants posted derogatory information
about a number of candidates, and by early to mid-2016, Defendants’ operations included
supporting the presidential campaign of then-candidate Donald J. Trump (“Trump Campaign”) and disparaging Hillary Clinton."

Trump can keep lying that there was no Russian “meddling,” but his lies won't work anymore. Thirteen Russians are charged with doing exactly what he has insisted over and over wasn’t done. The indictment puts forth a copious amount of evidence that this conspiracy existed, and that specific attempts were made to carry it out. That’s what happens when the criminal justice system gets involved. It doesn't accept lies. It charges people who lie with perjury. If Trump doesn't believe this, he should ask his former National Security Adviser Michael Flynn, and his former campaign adviser George Papadopoulos.

The way Trump has tried to spin the bad news that was carried into the Oval Office on Friday by Deputy Attorney General Rod Rosenstein has been pathetic. He spent the long holiday weekend trying to say that the fact the Russians began their interference campaign in 2013 exonerates him because he wasn't running for president back then. “No collusion” Trump tweeted, as if trying to wish it away.

Bullshit. 2013 was the year Carter Page got involved with three Russian spies in New York City. The three Russian nationals were later indicted for espionage. Two worked in the Russian mission to the U.N. and had diplomatic cover and were expelled from the country. One spy worked in the New York office of Vnesheconombank (VEB Bank), the bank owned by the Russian government and controlled by Putin. He was convicted of espionage and jailed for a year before being expelled from the country. Carter Page was referred to in the charges against the spies as “individual A,” a person who met with the Russian spies and passed them information. Page has since admitted “individual A” was him.

VEB Bank was sanctioned by the Obama Administration in 2014 after the Russian incursion into the Ukraine and seizure of Crimea, and banned from doing business in the United States. This sanction was among those Trump’s National Security Adviser, Michael Flynn, promised to lift in his infamous phone conversation with Russian Ambassador Sergey Kislyak in December of 2016. It was this conversation Flynn lied about to the FBI, causing him to be indicted for perjury and begin his cooperation with Mueller’s investigation. So Russia’s interest in electing Trump goes straight back to 2013, with the arrest of its spies and discovery that the VEB Bank was being used for espionage, and 2014, with the sanctioning of VEB Bank, which Putin and his oligarch buddies were using to launder ill-gotten monies and move them out of Russia.

2013 was also the year Trump took the Miss Universe Pageant to Moscow. It is widely suspected that he made up his mind to run for president after Obama eviscerated him at the 2011 White House Correspondents dinner. I'll bet he told his Russian oligarch buddies in Moscow in 2013 that he was planning to run for president. I'll bet his oligarch buddies told Putin. That's when Putin made his decision to back Trump when he began his run for the presidency. The man he picked to run his secret operation to influence the presidential election was one of the oligarchs closest to him, Yevgeny V. Prigozhin, who was named in Mueller’s indictment as running the troll factory in St. Petersburg the Russians called the Internet Research Agency which generated and paid for all of the bots and posts and lies floated by the Russians to help elect Trump.

Fox News and various pundits and politicians friendly to Trump have tried to pooh-pooh the Mueller indictment as much ado about practically nothing, comparing 13 Russians and the expenditure of a few million dollars to the presidential campaigns of Clinton and Trump, which employed thousands of campaign workers and spent hundreds of millions of dollars during the electoral season.

But it’s what’s left out of the indictment that is potentially as important as what’s in it. It is known, for example, that the St. Petersburg troll factory employed as many as 90 people who worked in 12 hour shifts to generate all the content that went into the Russian influence campaign. Yet only 13 Russians were indicted. The indictment names the 13 Russians and gives their specific jobs and titles within the Internet Research Agency. This means the Mueller team had access to incredible quantities of intelligence from the CIA and NSA on the Russian operation, and doubtlessly has seen all of the communication between the 13 named Russians and anyone they were in contact with in the United States.

The other key point is what the Russian were not indicted for. It’s illegal for foreign nationals to spend money in American elections, and yet they were not charged with breaking any campaign finance laws. Instead, they were indicted for conspiracy to “defraud the United States” by taking actions to interfere with the “lawful functions of the Federal Election Commission, the U.S. Department of Justice, and the U.S. Department of State.” The “lawful functions” of these agencies would include enforcing the federal election laws and laws against stealing identities and using banks and other financial institutions to pay for illegal activities. By indicting the Russians for conspiracy to break American laws, the Mueller investigation and prosecution leaves open the question of who else conspired to break these laws. Any Americans with whom the Russians made contact can be charged with conspiracy to break these laws simply because they made contact with the Russians named in the indictment or had knowledge of the conspiracy.

That is what is meant by “collusion,” and the indictments mean it’s illegal.

The other thing missing were indictments of the Russians who hacked into and stole the emails from the Democratic National Committee and Clinton campaign chairman John Podesta. If Mueller’s past performance is a guide, these will be forthcoming soon.

Now Mueller has charged a lawyer by the name of Alex van der Zwaan with lying to the FBI about his contacts with Paul Manafort and Rick Gates. The lawyer, who worked for the white-shoe law firm Skadden Arps Slate Meagher & Flom LLP, has pled guilty and is cooperating with Mueller’s investigation. He worked with Gates and Manafort in the Ukraine during the time they were in the employ of Viktor Yanukovych, the former president of Ukraine who fled to protection in Moscow by his pal Putin after he was defeated. But van der Zwaan isn’t just any lawyer. He is also the son-in-law of German Kahn, a Russian oligarch and friend of Putin who owns Alfa Bank, the outfit that during the 2016 campaign continually contacted a server located in Trump Tower one floor below the Trump campaign headquarters. What this server was doing “talking” to a Russian bank connected to Putin has never been established, but you can bet that Mueller has his sights set on figuring that out.

Five days have passed since Deputy Attorney General Rod Rosenstein walked into the Oval Office and informed President Trump of this Russian conspiracy to influence the presidential election of 2016. More than two years have passed since the conspiracy was actually hatched. The FBI, the Department of Justice, the CIA, the National Security Agency, and the Defense Intelligence Agency have known since the summer of 2016 that the Russians engaged in a conspiracy to influence the presidential election and defraud the United States. Trump has denied that such a conspiracy existed for more than a year and has yet to convene a single cabinet meeting or meeting of his National Security Council to address the crime that has already been committed and the threat Russia represents to the elections this year and in 2020. Nor has he directly accused Putin of interfering with our election, or taken a single action to stop him from doing it again in the future.