Despite his friendship with Nixon, Billy Graham saw Christianity's shift toward the hard right as a big mistake 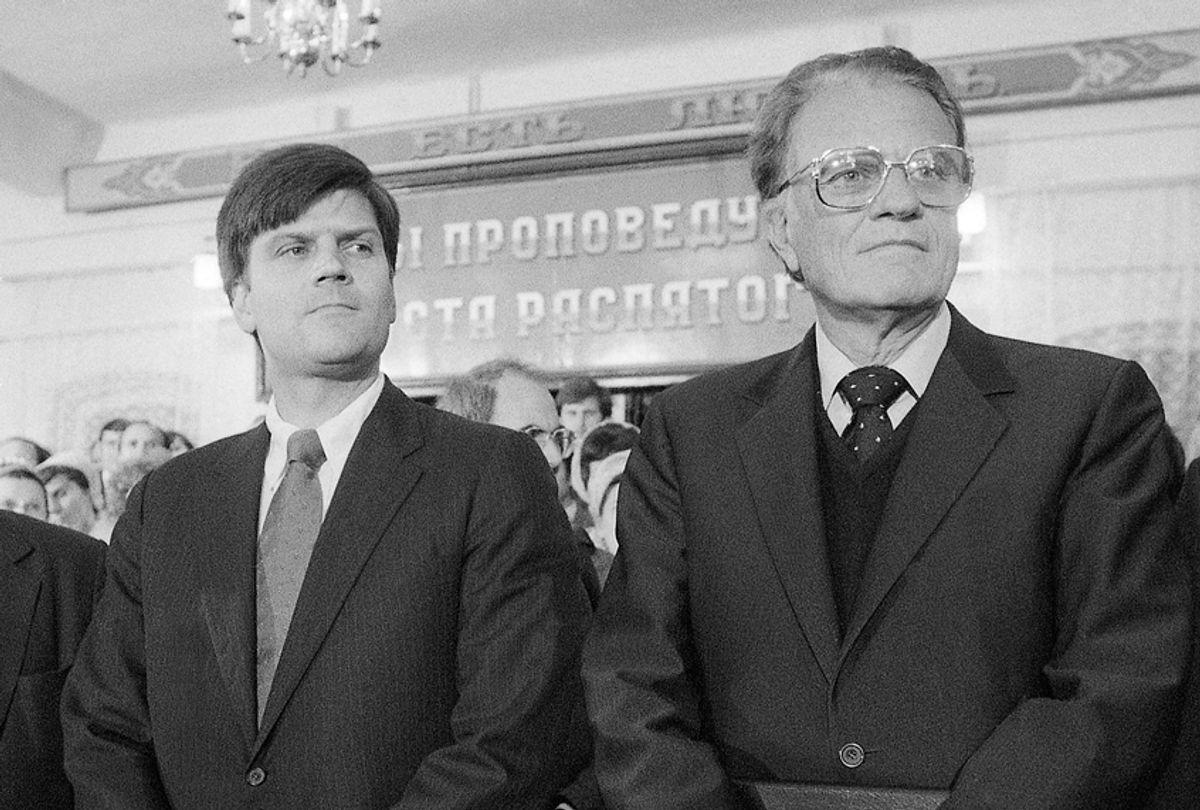 American evangelist Billy Graham and his eldest son, Franklin, at the Novosibirsk Baptist Church in Siberia in September 1984. (AP/Boris Yurchenko)
--

The phrase “old-time religion” usually connotes backwoods practices like snake handling that were more common in America’s frontier days. But the passing on Wednesday of the Rev. Billy Graham at age 99 also reminds us that faith in this country isn’t what it once was.

Thanks in part to telegenic pastors like Graham, evangelical Christians came to dominate Protestant America. The Pew Research Center has reported since 2007 that the majority of people who self-identify as Protestants also say that they are evangelicals.

But the growth of evangelical appears to have mostly been at the expense of the mainline Protestant denominations such as the Methodists, Presbyterians and Episcopalians (and, to a lesser extent, the Roman Catholic church). Since Graham began his 70-year career behind the pulpit, Americans as a whole have become less religious. According to the University of Chicago’s General Social Survey, in 1972 just 5.1 percent of respondents answered “none” when asked about their religious preference. By 2016, nearly a quarter of respondents, 21.7 percent, professed no faith tradition.

To a large degree, the decline of American religiosity appears to be related to the rise of the religious right, a movement that began in the mid-1970s as perhaps the first modern instance of what is now called “identity politics,” the practice of building a political mobilization strategy around non-political appeals.

As Salon and others have reported, the origins of the religious right are very different from the stories its modern-day spin-meisters want the public to believe. Instead of being galvanized by the issue of abortion, the Rev. Jerry Falwell Sr. and other evangelical pastors were actually motivated by federal government rulings against racial segregation.

In this regard, the North Carolina-based Graham was different from his Southern peers. Even before the Supreme Court’s Brown v. Board of Education decision, Graham agitated for racially integrated church services. He also invited black preachers, including the Rev. Martin Luther King Jr., to speak onstage with him. Graham later bailed King out of jail when he was imprisoned for protesting segregation.

“The ground at the foot of the cross is level, and it touches my heart when I see whites standing shoulder to shoulder with blacks at the cross,” Graham told a Mississippi congregation when an usher resisted his order to remove a rope line that separated blacks and whites during a 1952 rally.

While Graham was not above involvement in partisan politics, and was especially close to President Richard Nixon before and after the latter's humiliating downfall, Graham generally tried to keep himself at a distance from elected officials. That had been the tradition among prominent American clergy, who saw the admixture of faith and politics as being unseemly for both involved. While many embraced the Cold War because of the openly anti-religious nature of Soviet communism, most generally tried not to sully themselves by delving too deeply into political matters, following the advice of popular Catholic archbishop and televangelist Fulton Sheen that politics “usurps the soul and enthrones party over conscience.”

Graham himself seemed to understand what Falwell and other religious right figures had in mind in building up their Moral Majority organization, as he revealed in a 1981 interview. Speaking with Parade magazine, Graham recounted what he had told Falwell and several other ministers:

“I told him to preach the Gospel. That’s our calling. I want to preserve the purity of the Gospel and the freedom of religion in America,” Graham said. “I don’t want to see religious bigotry in any form. Liberals organized in the ’60s, and conservatives certainly have a right to organize in the ’80s, but it would disturb me if there was a wedding between the religious fundamentalists and the political right. The hard right has no interest in religion except to manipulate it.”

Falwell, Christian Broadcasting Network founder Pat Robertson and others completely ignored that advice, working instead to set up a political ideology premised on making Jesus the prince of this world.

Ronald Reagan, then GOP’s 1980 nominee, was overjoyed at the idea of an influx of highly energized voters. “I know you can’t endorse me … but I want you to know that I endorse you,” he famously told an early Religious Right gathering.

The next day, radio commentator Bryan Fischer formalized the Christian right's embraced of the moral relativism it had once railed against. He argued that religious conservatives ought to leave Trump alone, just as Democrats had given a pass to Bill Clinton in the 1990s over his alleged serial sexual misconduct.

“If there are policies that are good, there is no reason for us not to support him just because he did such a tawdry thing 11 years ago,” Fischer continued. “I’m not going to punish America because of what he did 11 years ago; that wouldn’t make any sense whatsoever.”

Sadly for Graham, members of his own family have also rejected his desire to keep politics and faith from intermingling too much. His daughter Anne Graham Lotz has argued that the 9/11 attacks were a punishment from God on America for teaching evolutionary biology in school. Last year, she warned that the solar eclipse was an omen of more tribulations to come.

Billy Graham's eldest son, Franklin, has made a name for himself in recent years, not for expounding on the Gospel but for his steadfast loyalty to Republicans. In 2016, he even set up a nationwide tour which was ostensibly about preaching but was largely devoted to driving evangelicals out to vote for Republicans.

“Ladies and gentlemen, we’ve got maybe one election left,” he thundered at a February 2016 stop on his Decision America trip. “And I’ve been told by people who know that the game will be over. And I’m telling you right now, we’re very close to losing.”

He continued: “Secularism and communism, there’s no difference. They’re both exactly the same, they’re both godless. And the Enemy came in and didn’t even have to fire a shot, and he’s already got control.”

The younger Graham’s hateful attitude toward secular people, lesbians and gays, and leftists of all stripes is a dramatic departure from his father’s legacy. Though Billy Graham railed against communism in his early ministerial years, he came to realize that he had no hope of persuading people if he refused to treat them with respect, as Christianity Today writer David Aikman noted Wednesday.

“I have seen that we must seek the good of the whole human race, and not just the good of any one nation or race,” Graham said during a 1978 visit to Poland, which was then under Soviet rule. He continued his overtures for decades and in the end, the authoritarians that he had once railed against ended up being thrown out by their own people.

As America continues its migration away from Christianity, Franklin Graham and the next generation seem to have learned exactly the wrong lesson.