Trump's cheat sheet for meeting with shooting survivors: "I hear you"

Is the president actually unable to show empathy to Americans without a prompt? 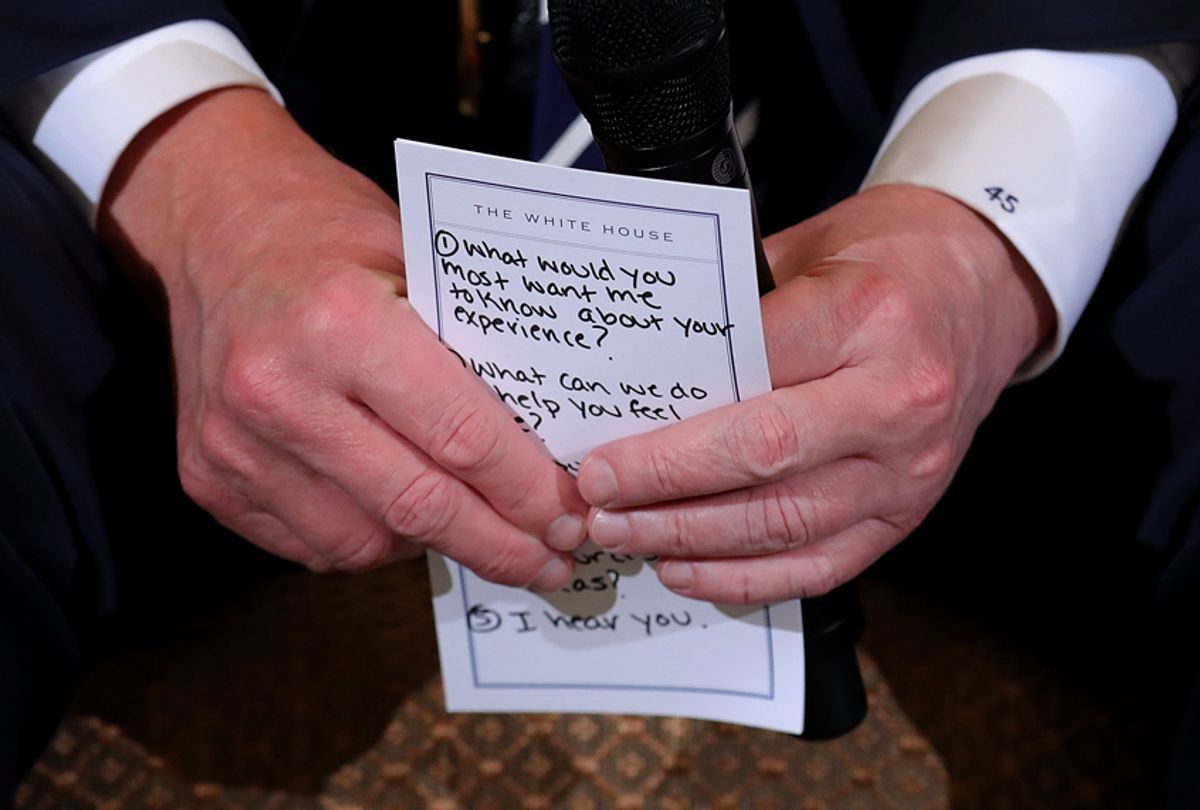 Donald Trump holds his notes while hosting a listening session with students survivors of mass shootings at the White House, February 21, 2018 in Washington, DC. (Getty/Chip Somodevilla)
--

In the wake of the tragic school shooting that left 17 dead last week in Parkland, Florida, President Donald Trump invited students, teachers and parents affected by gun violence to the White House for a "listening session."

The emotional, and at times tear-filled, conversation was quickly overshadowed when a photograph of the president holding hand-written talking points on official White House stationary surfaced. The final bullet point read, "I hear you." The written cue became a trending topic on social media, with critics highlighting the president's empathy deficit.

Close-up pictures of Trump's cheat sheet revealed that he came to the meeting equipped with a total of five agenda items. The first was a reminder to ask the question, "What would you most want me to know about your experience?" The second question listed was, "What can we do to make you feel safe?"

Trump's notecard also encouraged him to ask survivors for their ideas and for what resources they believe are needed to curb gun violence.

But it was the final point – "I hear you" – which provoked the most outrage, with pundits suggesting Trump would have been unable to express sympathy to those seated directly in front of him sans a prompt.

"For him to have to write down, 'I hear you,' as one of his notes is kind of troubling," Canadian musician Ron Sexsmith remarked on Twitter.

Parker Malloy, a senior writer at Upworthy, mocked Trump's seeming unpreparedness with a tweet featuring a video of a student seeking motivation ahead of an exam.

But not everyone was equally troubled by the note.

Robert George, a conservative writer and member of the New York Daily News editorial board, noted that Trump's note was not out of the ordinary for an individual holding political office. "When meeting with public/constituents, politicians often use notes prepared by staff," he tweeted. "I mean, seriously, folks. This is one of the more normal things Donald Trump has done. Not a big deal."

Trump proposed three major changes to current gun laws, in a tweet early Thursday morning. The president said he would be “strongly pushing” legislation to Congress that would raise the minimum age requirement for purchasing a firearm, make the background check more rigorous and ban the sale of bump stock modifications. In the same tweet, the president suggested that he is willing to take action on gun policy – and place blame on Capitol Hill if no legislation is approved.

The Marjory Stoneman Douglas High School shooting was one of the deadliest school shootings in American history. Whether the White House and Congress, both under Republican control, will act this time is anyone's guess.