“We are workers, not slaves”

Increasingly fed up with labor conditions, farmers and farmworkers have been organizing globally 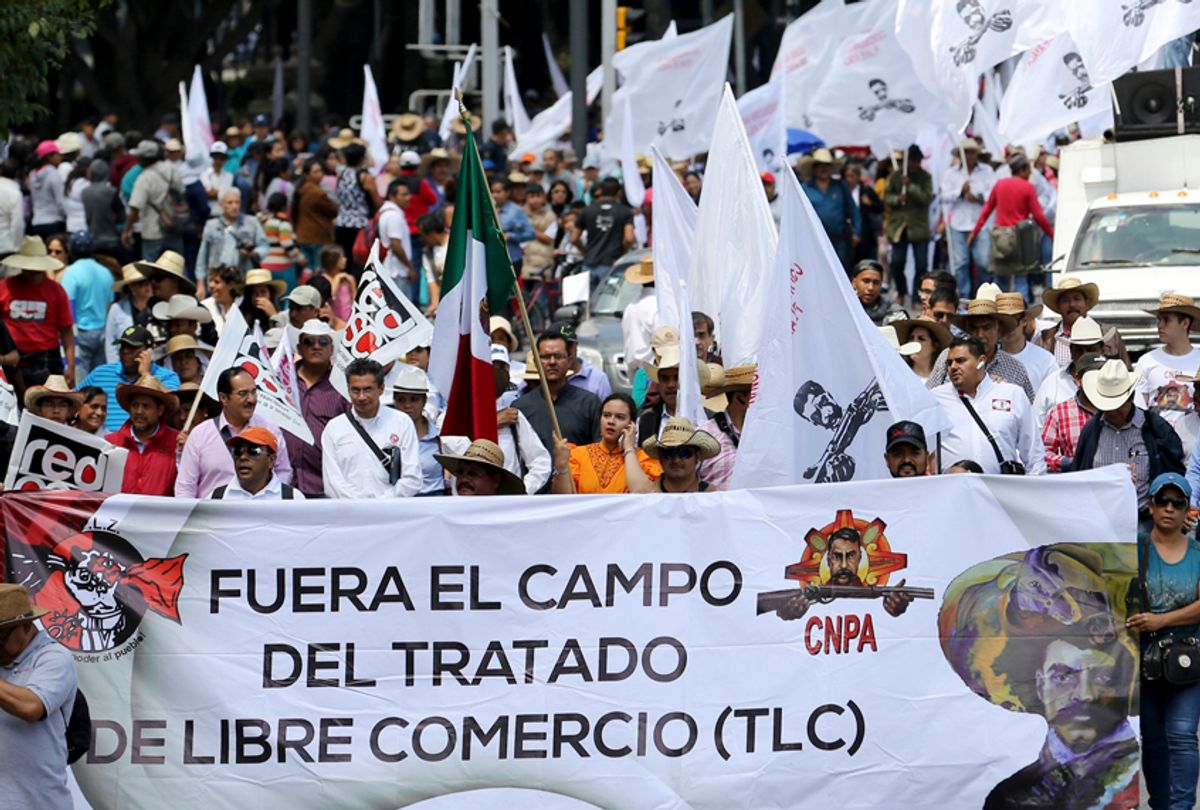 Excerpted from “We Are All Fast-Food Workers Now”: The Global Uprising Against Poverty Wages by Annelise Orleck (Beacon Press, 2018). Reprinted with permission from Beacon Press. 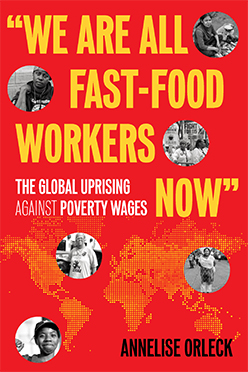 In March 2015, tens of thousands of indigenous berry pickers walked out of the vast agribusiness fields of the San Quintin Valley in northern Mexico, launching the largest agricultural strike Mexico had seen in decades. Strikers carried signs that explain much about the world in which twenty-first-century workers operate. “Somos Trabajadores, No Esclavos. We Are Workers, Not Slaves.” When police cracked down violently, the Mexican newspaper La Jornada ran a cartoon of police beating strikers. “Haven’t thirty years of neoliberalism taught you anything?” the caption asked. The answer, in short, is: Yes. A lot.

As neoliberalism has spread, so have mass evictions, involuntary migrations, and many forms of unfree labor. Among those who grow grapes for the global wine market, pick berries, apples, and tomatoes for global grocery chains, are many who would rather have stayed on their own lands, growing their own food. In China alone, tens of millions of farmers were displaced by agribusiness, factories, and real estate development in the 2010s. Many became factory workers, in vast export zones, making products for export. In 2015, China unveiled a plan to move 250 million more farmers to cities by 2025. Meanwhile, food multinationals Cargill, Monsanto, and John Deere sell maize and soybeans grown in Brazil to Chinese consumers.

On Luzon, the largest island of the Philippines, farmers flooded the cities in the early 21st century as 2,000-year-old rice terraces fell into disrepair, says rice activist Vicky Carlos Garcia. Indigenous farmers on the southern island of Mindanao, forced off their lands at gunpoint to make way for banana and palm oil plantations, also have resettled in the vast shantytowns at the center of Manila—the infamous slums of Tondo. “Ask them why they are there,” says Garcia. “No one ever asks them. They just call them problems.”

In South Africa, more than two million farmers and farmworkers were evicted between 1994 and 2013. Cambodia, Taiwan, India, Japan, and Indonesia passed new laws in the 2010s opening their countries to foreign ownership and leasing, leaving tens of millions of farmers landless. After the 1994 North American Free Trade Agreement, an estimated two million Mexican farmers left their lands as corn prices plummeted and common lands were privatized.

These migrants fill the mega-slums of Asia, Latin America, and Africa, living in cardboard shacks and tin huts along polluted rivers. They survive on food scavenged from fast-food Dumpsters, recooked and resold. They pick and resell garbage—waste from the global economy. Profiteers sell them water and access to illegal electric lines at exorbitant rates.

Increasingly fed up, farmers and farmworkers have been organizing globally. In 1993, they created La Via Campesina—“The Peasant’s Way.” By 2014, the group represented 164 farmers’ organizations in 72 countries and held conventions from Indonesia to Turkey. Its headquarters move every few years—from Brussels to Honduras to Zimbabwe. In 2015, Zimbabwean organic farmer Elizabeth Mpofu became “coordinator of the international peasant movement.” She is leading the fight against transnational corporations grabbing land and water, making people landless, poisoning the earth, destroying traditional farming practices. Via Campesina has helped to tie farmers, farmworkers, and landless and indigenous activists together around the world. “We are organized,” she said in 2016, “and we know what we want.”

In China, protests that the government calls “mass incidents” have skyrocketed, from a few thousand annually in the early 1990s to more than 180,000 per year in the 2010s. Most have been sparked by evictions and land expropriations. It’s the same story around the world. In 2012, Via Campesina began to push the United Nations to adopt an International Declaration of the Rights of Peasants to enshrine rights to land, clean water, and freedom from violence.

"In most regions where Via Campesina is present, the leaders are women,” Mpofu says. Women are “the backbone of agriculture” and have been at the forefront of farm protests. In South Africa in 2012, women grape pickers sparked the largest farmworker strike the country had seen in decades. In the Western Cape Winelands, thousands laid down their hoes and scythes to demand gender and race equity in pay, clean water, decent housing, and an end to sexual harassment and violence. By strike’s end, they had nearly doubled their wage to $10 daily. Most importantly, they overcame their fear and learned they could win gains if they fought.

When Oaxacan migrant berry pickers in the U.S. and Mexico began organizing en masse in the twenty-first century, women played a crucial role as well. One Mixteca woman, who had picked berries in the San Quintin Valley of northern Mexico since she was seven, explained that she was tired of being yelled at and made fun of for being indigenous, tired of being sexually harassed and abused. “That’s how it was for many years.” But the stirrings of militancy among other indigenous workers changed her. “We were asleep but now people have stood up and we will continue in this struggle for what is right so that our grandchildren will have a better future.”

Tens of thousands of Mixtecos headed north. Arcenio Lopez walked through desert mountains under cover of night, paying “coyotes” (human smugglers) to guide him from Tijuana to California. He dodged snakes and bandits to join his father who had found work picking berries in Oxnard and lettuce in Watsonville. Now director of the Mixteco/Indigena Community Organizing Project (MICOP), Arcenio trains indigenous farmworkers to stand up for their rights.

The migrants MICOP serves often have spent years following crops from Mexico through California, Oregon, and Washington. They pick berries, apples, and grapes, pack kale, lettuce, and cilantro. At the end of the season they start again.

But the border has been increasingly militarized and it is more difficult to cross back and forth these days. Families have been separated. Some remain in California, Texas, or Arizona. Others work on the Mexican side — planting and picking tomatoes in Sinaloa, berries in San Quintin. They are the people behind the fresh-food revolution that has transformed the diets of affluent consumers worldwide.

Theirs, too, is a struggle for respect and against violence. In 2012, Mixteco and Triqui farmworkers in Oxnard brought a case to the California Agricultural Labor Relations Board against employers who had used Tasers to stop field-workers from unionizing. When he was fired for organizing, Mixteco migrant Bernardino Martinez sued in court, and a judge ordered his reinstatement. “Most workers are too scared to go to court,” Martinez says. “They are afraid they’ll be deported. I was scared too, but even more, I was mad. And I was tired. I had been doing this for seven years, and it never got better.”

For it to get better, indigenous field-workers in the U.S. and Mexico knew they would have to build coalitions that wielded economic power. When workers struck Washington State’s largest blueberry grower in 2013, they reached out to consumers and college students and organized a boycott of Sakuma berries. It quickly broadened into a boycott of Driscoll’s berries. To make that work, they knew, meant organizing globally. Driscoll’s employs migrants from Canada to Mexico, Egypt to Portugal, and exports berries to Europe, China, and Australia.

Transnational networking produced impressive results. In the spring of 2015, 50,000 berry pickers in Baja California walked out of the fields, threatening the immensely lucrative harvest. Like their South African counterparts, many of these workers were migrants, forced to flee their ancestral farmlands by falling produce prices and international trade agreements. Bernardino Martinez believes that it is time for migrant farmworkers to be offered a path to citizenship, in the U.S. and around the world. Giving migrant workers citizenship rights, he says, “is the least you can do. Remember, we feed you all.”

Annelise Orleck is professor of history at Dartmouth College and the author of five books on the history of U.S. women, politics, immigration, and activism, including "Storming Caesars Palace: How Black Mothers Fought Their Own War on Poverty." She lives in Thetford Center, Vermont.