Trump's neoconservative critics have liberal fans now, but their real cause is saving American imperialism 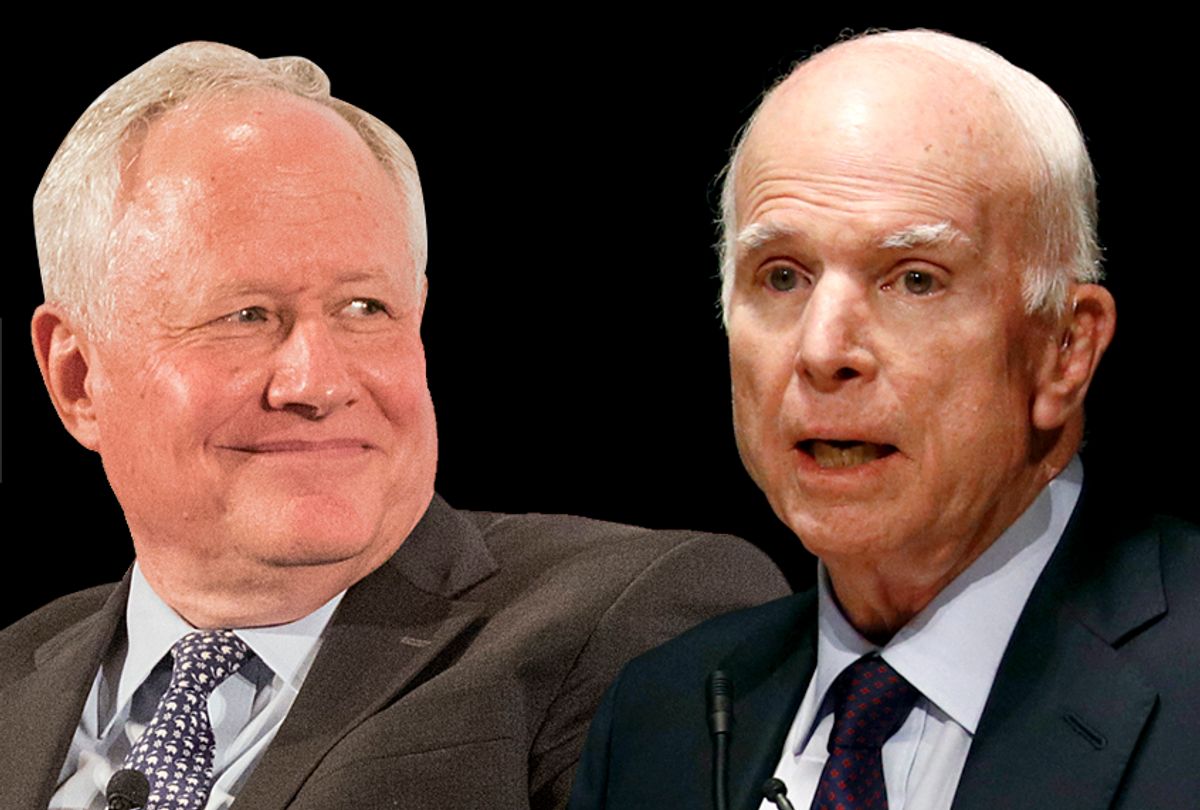 Of all President Trump's critics on the right, neoconservatives have proven to be the most consistent over the past two years. Unlike most Republicans, who quickly fell in line once Trump was elected president, prominent neocons like Bill Kristol, David Frum, Max Boot and Sens. Lindsey Graham and John McCain — to name just a few — have remained vocal in their opposition to the Republican president since he was elected in 2016.

In the process these neoconservatives have managed to salvage their sullied reputations, with many Democrats embracing them for their Russia-centered critiques of the president. This shift was evident in a recent approval rating poll for George W. Bush, revealing that his favorability has soared among Democrats from just 11 percent approval in 2009 to 54 percent today. Other neocons like Kristol and Frum — who notoriously coined the phrase “axis of evil” as President Bush’s speechwriter — have become darlings of the “Resistance,” a movement that seems to have no real politics besides opposing the contemptible president.

While neocons like Frum and Kristol have gained some new liberal fans on Twitter, their politics haven’t really changed: They are still very much the neoconservative hawks they were in the Bush era. In a recent interview with CNBC, for example, Kristol was asked whether his political views had been altered by the rise of Trump. “No, not much,” he replied. “I mean, pro-American leadership in the world. Anti-America First. Pro-free trade, pretty much. Moderate on immigration. Limited government, constitutional government.”

“I'm a conservative who's been mugged by Trump,” said Kristol, evoking his father’s famous quip that neoconservatives were liberals who had been mugged by reality. The truth is that neocons have been some of the most ideologically consistent critics since the rise of Trump, and their antipathy for the president is entirely in line with their worldview.

The reason why is simple: Neocons are, first and foremost, exponents of the American empire, and no one has done more to disrupt and destabilize that empire — and accelerate its decline — than Donald Trump. Neocons like Max Boot — who once declared that “U.S. imperialism has been the greatest force for good in the world during the past century” — have long advocated that the United States embrace its status as an empire and use its unrivaled power to police the world and promote its values (by force if necessary). Trump, however, is a right-wing nationalist who more or less feels that the United States has gotten a raw deal in running an empire. He frequently complained during his campaign about how expensive it is to have hundreds of military bases stationed around the world.

As historian Alfred McCoy points out in his new book, “In the Shadows of the American Century,” Trump embraces what the late historian William Appleman Williams called America’s “grand illusion,” or the “charming belief that the United States could reap the rewards of empire without paying the costs of empire and without admitting that it was an empire.”

In a recent essay for TomDispatch.com, McCoy, who has written extensively about America’s imperial exploits throughout his long career, notes that during just 12 months in office, Trump has accelerated the decline of the American empire "by damaging almost all the key components in the intricate architecture of American global power.” In just one extraordinary year, McCoy continues, “Trump has destabilized the delicate duality that has long been the foundation for U.S. foreign policy: favoring war over diplomacy, the Pentagon over the State Department, and narrow national interest over international leadership.”

Of course, while President Trump has no doubt accelerated the decline of America as a global hegemon, he is more of a symptom of the crumbling empire than a cause. Ironically, it was when the neoconservatives achieved their greatest influence during the Bush years that the United States’ imperial decline became fully apparent. The disastrous war in Iraq revealed fundamental weaknesses in the American empire, and at the end of the Bush years the financial crisis revealed fundamental weaknesses in the U.S. economy, which has always been an essential component of the country’s imperial expansion.

The United States’ rise to global dominance over the past two centuries coincided with the development and spread of capitalism worldwide, and it is not unreasonable to assume that the American empire will continue to falter as the internal contradictions of capitalism continue to heighten. With class antagonisms intensifying and income and wealth inequality reaching historic levels both nationally and internationally, along with the looming threat of climate change and technological mass unemployment, the stability of global capitalism is very much in doubt.

Furthermore, it is only a matter of time until the U.S. economy is overtaken by China’s, and according to some projections that nation's GDP will surpass America’s in just 10 years, by 2028. China is not only challenging America’s global economic supremacy but also its political and military dominance on the Eurasian landmass, aided by Trump’s policy of “America First” isolationism.

“World leadership lost is never readily recovered, particularly when rival powers are prepared to fill the void,” McCoy writes in his aforementioned essay. “As Trump undercuts the U.S. strategic position at the axial ends of Eurasia, China is pressing relentlessly to displace the United States and dominate that vast continent.”

As previously noted, Trump is a symptom rather than a cause of America’s declining status as a superpower, even if his election has accelerated the time frame. Sociologist Johan Galtung, who accurately predicted in 1980 that the Soviet Union would fall within 10 years, forecast in 2000 that the U.S. empire would similarly collapse within 25 years. Before this collapse, Galtung said, the U.S. would go through a period of reactionary fascism, which he described more as a “symptom of the decline — lashing out in disbelief at the loss of power,” as Vice puts it. That seems like an eerily accurate description of Trump and the reactionary political movement that formed around his 2016 campaign.

Trump ran on a politics of nostalgia that appealed to many Americans who feel that their country is in decline. His promise to “make America great again” was a reactionary call to arms. But in actuality Trump’s reactionary agenda will only serve to make America more disdained and distrusted by the world than perhaps ever before. According to a Pew Research Center survey from last June, which polled people from 37 countries, “a median of just 22% has confidence in Trump to do the right thing when it comes to international affairs,” compared to 64 percent who had confidence in Obama to “direct America’s role in the world.” With the Trump administration pushing to slash funding for the State Department, pulling out of diplomatic agreements like the Paris climate change accord, and increasing the bloated military budget — which is already bigger than the next eight countries’ spending combined — one can expect America’s international reputation to continue its downward spiral.

In the end, the United States’ decline as a global hegemon will not only be due to the country’s inability to deal with the many difficulties facing the world in the 21st century, but its own internal domestic problems. A case in point: Last December the UN issued a report on poverty and inequality in America, and the report’s author, Philip Alston, documented levels of poverty that he had never seen before in the developed world. “Washington is very keen for me to point out the poverty and human rights failings in other countries,” remarked Alston. “This time I’m in the U.S.”

According to Alston, the policies currently being implemented by Republicans and the Trump administration will exacerbate the country’s already extreme levels of inequality and poverty. The GOP tax bill, he writes, “stakes out America’s bid to become the most unequal society in the world.” As the American empire continues its incessant decline, it will come to look even more like the countries in the developing world that it has dominated and exploited for so long.