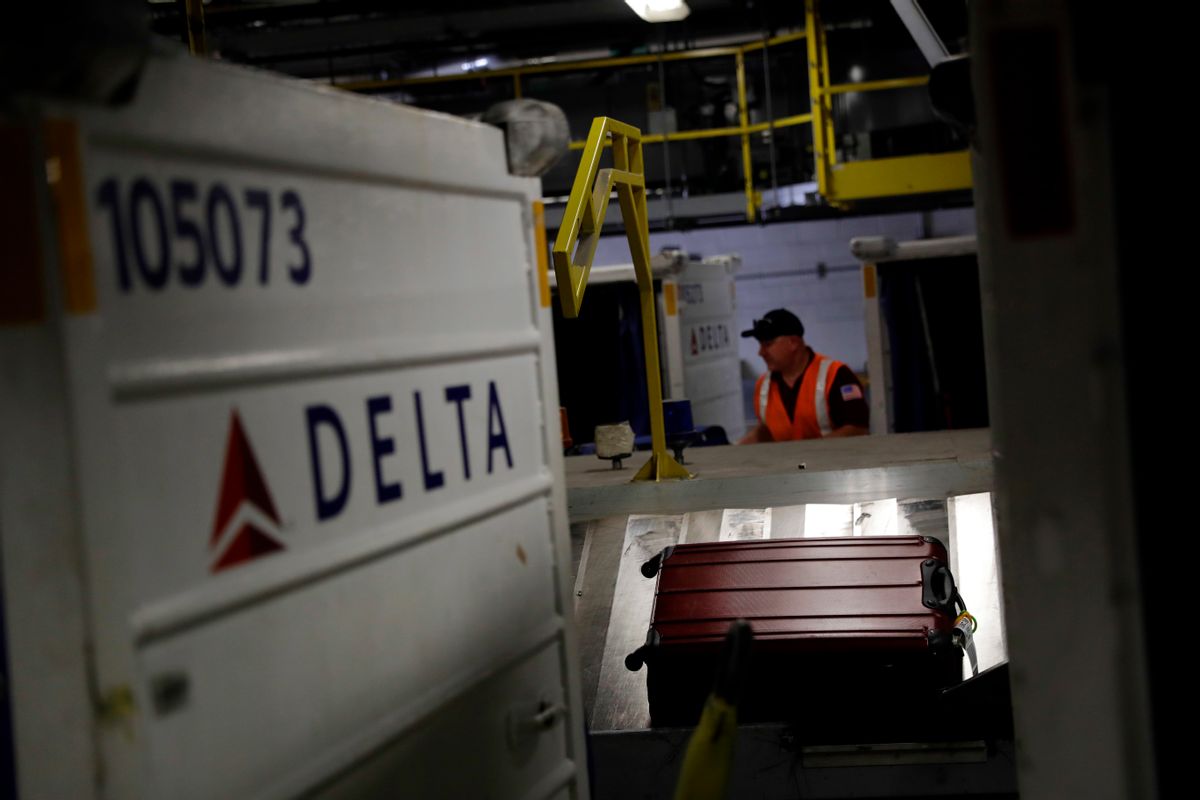 In this July 12, 2016, photo, a suitcase rides a carousel after being unloaded from a Delta Air Lines flight at Baltimore-Washington International Thurgood Marshall Airport in Linthicum, Md. Delta Air Lines is rolling out new technology to better track bags throughout its system. (AP Photo/Patrick Semansky) (AP)
--

American politics have become so warped that Republicans are suddenly against corporate cronyism and for using the tax code to target political opponents.

Georgia's Lt. Gov. Casey Cagle announced on Twitter Monday that he "will kill any tax legislation that benefits" the airline corporation Delta "unless the company changes its position and fully reinstates its relationship with" the National Rifle Association.

GOP State Sen. Rick Jeffares also went after Delta on Monday, after the carrier dropped its discount program with members of the NRA.

I stand with the NRA & support our 2nd Amendment rights. Delta Airlines is now seeking $40 MILLION TAX BREAK from the GA Legislature. I'm leading the charge to let Delta know their attack on the NRA and our 2nd Amendment is unacceptable. #StandWithJeffareshttps://t.co/YQ16VcGch2 pic.twitter.com/1x256htX9u

The Georgia Senate, on Monday afternoon, then blocked a bill that would have given Delta a hefty tax break, the Atlanta Journal Constitution reported.

Obviously, this is a threat that goes against core Republican principles such as free-market capitalism.

In the weeks since the Valentine's Day shooting at Marjory Stoneman Douglas High School that left 17 dead, companies have severed ties with the gun advocacy group that holds major influence over Washington, as Salon has previously reported.

Meanwhile, Trump has floated various minor proposals to help prevent future gun violence but said that the NRA is "on our side," Politico reported. "Don't worry about the NRA. They're on our side," Trump said during an address on Monday. He has also repeatedly called for arming teachers and faculty, but it's still unclear how or if Congress will act, when tasked with handling gun reform legislation.

"You guys, half of you are so afraid of the NRA. There's nothing to be afraid of." Of course, it's easy for the man who has a $30 million relationship with the NRA to deem them as altruistic actors. The reality is that they aren't by default and have refused to back even the modest proposals the president has suggested. It's unlikely that a group that lobbies for the gun industry would back legislation that could potentially harm profit margins.