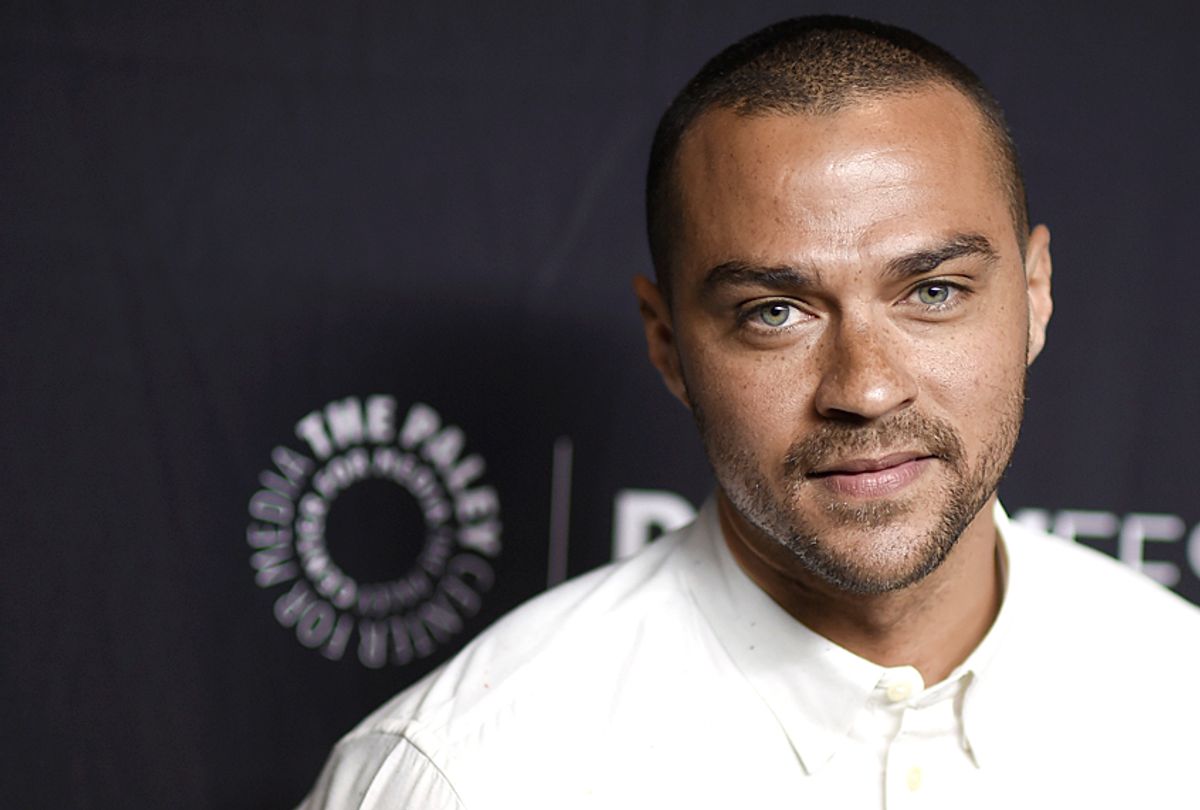 In 2016 "Grey's Anatomy" star Jesse Williams magnetized media attention to him after his acceptance speech upon winning BET's Humanitarian Award. Williams is a lifelong activist, and in addition to playing Dr. Jackson Avery on the ABC hit drama, works on a number of passion projects related to racial and social justice.

But at the time of the speech, which hit in the heat of the Black Lives Matter movement, the country's long festering racial divide had broken wide open. "What we've been doing is looking at the data and we know that police somehow manage to deescalate, disarm and not kill white people everyday," Williams said. "So what's going to happen is we are going to have equal rights and justice in our own country or we will restructure their function and ours." At the time a petition started on Change.org, which went nowhere, demanded that ABC fire him.

Lots has transpired in the nearly two years since that moment, as we know, much of we'd describe as disheartening. But Williams has kept on pushing, creating projects with the production company he's co-founded, farWord Inc., as well as serving on the advisory board of Sankofa, a social justice organization founded by Harry Belafonte.

It's through Sankofa that Williams became a producer on Matthew Cooke's latest work "Survivors Guide to Prison," current available via video on demand services.

Cooke's abrasive documentary style is not for the faint hearted, a truth distinct from the hardcore subject matter of "Survivors Guide."  The director favors a claws-out, rough edged approach to his subject matter reminiscent of skate rock or punk videos, designed to hold the viewer's attention even as it threatens challenges the audience's sensibilities.

How digestible the documentary's presentation is depends on what an individual expects from non-fiction works. "Survivors Guide," like Cooke's 2012 entry "How to Make Money Selling Drugs," defies the standard even-handed and didactic longform documentary presentation by adding a snarling, sweaty energy to every frame, setting quick smash-cuts of security camera footage of law enforcement confronting suspects edited to turntable scratching and roaring electric guitars. Reviews of "Survivors Guide" in both The Hollywood Reporter and Variety use the term "assaultive" to describe his filmmaking style.

Despite this, the information conveyed in "Survivors Guide" to prison is meant for all ages because the reason for the film's existence is to hammer home the point that no American can fool himself or herself into thinking that they can never fall down the rabbit hole of our broken criminal justice system.

"For a lot of well-meaning, open-minded folks, regardless of age, there is a general willingness to understand that something's wrong, but it kind of stops there when you're not able to articulate who, why, what would need to change, and what is actually rigged about this system," Williams observed. "It kind of stops you short at Thanksgiving dinner table. It stops you short when you're trying to kind of have this verbal battle with somebody to talk about it, but you don't have your ammunition, for lack of a better term."

"Survivors Guide to Prison," he added, is that means of making such data accessible and appealing. The film touches upon many of the same topics director Ava DuVernay explored in her Netflix documentary "13th," framing its instructions on what to say and not to say, and what to do and not do, with a barrage damning statistics — starting with the mind-reeling estimate that 13 million Americans are arrested every year. And none of our states has use-of-force laws on the books that meet international standards.

Some of the data is well-known in our era of non-scripted reality entertainment about prison life: that American has the highest incarceration rate in the world, that it disproportionately targets the poor and people of color and metes out harsher punishments for blacks than it does for whites who commit the same crimes, with black men receiving on average a 20 percent longer sentence than white men.

But its edgy presentation and its high-power roster of celebrities gravely listing off step by step directions of what to do in every frightening scenario starting with being stopped by a beat cop through trial, conviction, the appeal process and for the lucky few, re-acclimation into society, strikes the right tone of urgency while holding your attention.

The breadth of its participants is as impressive as its list of producers, which includes Salon Talks guest David Arquette, Adrian Grenier, Danny Trejo, Susan Sarandon, who also serves as a narrator, and Williams. Though the majority of the stars featured hail from the worlds of rock and hip-hop, including such luminaries as Ice-T and Chuck D, "Survivors Guide" also features the likes of Quincy Jones, Deepak Chopra, Patricia Arquette, Danny Glover and Cynthia Nixon, as well as commentary from Van Jones and Michelle Alexander, author of "The New Jim Crow."

And some of these stars dispense advice based on their personal experiences with the prison system, including Trejo, MC5 guitarist Wayne Kramer and hip-hop artist Busta Rhymes.

Inclusion of such a wide range of personalities was done with the intent of ensuring that "Survivors Guide" speaks to every age, gender and income demographic possible. But Cooke doesn't merely rely on star power to get the film's message across.

Although the cases of two innocent men who were wrongfully imprisoned serve as its narrative backbone "Survivors Guide" notably touches upon other cases of wrongful convictions. In one of them, a woman went law enforcement for questioning about a case. One of her kids remembered that she reassured her children she'd be home for dinner, and didn't actually come back to them for years.

In the main the stories of Bruce Lisker, who served 26 years, and Reggie Cole, imprisoned for 16, lead us through "Survivors Guide." Lisker and the woman cited above are both white, by the way, examples of what hints at being an intentional ploy on the part of the producers and filmmakers to prove that our criminal justice system can ensnare anybody.

"I'm speaking for myself now," Williams qualified, "but it's generally harder for the white population to attach themselves to already loaded minority groups who they are already conditioned to believe that they're kind of born with a couple strikes against them, and they're very likely to already kind of be guilty of something. Blackness and brownness is often treated as an act of aggression.

"But when you have an older white woman or a young white guy who's fairly articulate and he's getting railroaded, then you can only imagine how bad it is for other folks," he continued. "I think that some of that was certainly deliberate in choosing subjects that a wider audience could have some empathy for. That's unfortunate that we need that. It's unfortunate that sometimes you need a white protagonist for folks to find humanity in. But in this case, I saw a benefit to it."

Cole, an African American, was pushed into the system as a teenager. The film implies he was named in a murder case by a criminal running a local prostitution house who gave Cole up to the cops despite his innocence. Lisker, meanwhile, was accused of murdering his mother.

Though their backgrounds were different, the economic circumstances leading to their convictions bear a number of similarities, starting with the fact that neither could afford bail or high-powered legal representation. And their stories only grow grimmer from there.

Part of the unspoken challenge in gaining attention and traction for "Survivors Guide" is overcoming our culture-wide tendency to presume that anyone caught up in our penal system deserves whatever horror they're made to endure.  This is part of the reason for the passionate media push Williams and other stars are lending to this project.

"There's not new information coming out about this," he said. "It's just a warmed-up audience that is a little bit more receptive and able to consider that [information]. It sucks that we have to shove it down their throats for them to taste it, but that's part of the process. All of this, all the information, the multitude of sides and perspectives, helps any group not be viewed as a monolith, or as some homogenous blob that just kind of is predisposed to certain behaviors."

And though the workings of our justice system are as under attack as the rest of our democracy, Williams maintains his optimism about how the conversation has evolved over the last couple of years.

"We clearly have a consistent increase in folks of influence, and folks making themselves of influence, who are talking about what's happening in around us," Williams said. ". . . They're participating in our society and seeking full citizenship, not only for themselves, but for others. There is, if we're looking at a graph, it's definitely going up and to the right, in terms of active citizen participation in the system. That feels very clear to me and that is a good thing now."