For atheists, #MeToo might be too little, too late

Atheists spoke out about sexual harassment years ago, to no avail. Has #MeToo come to late to save the community? 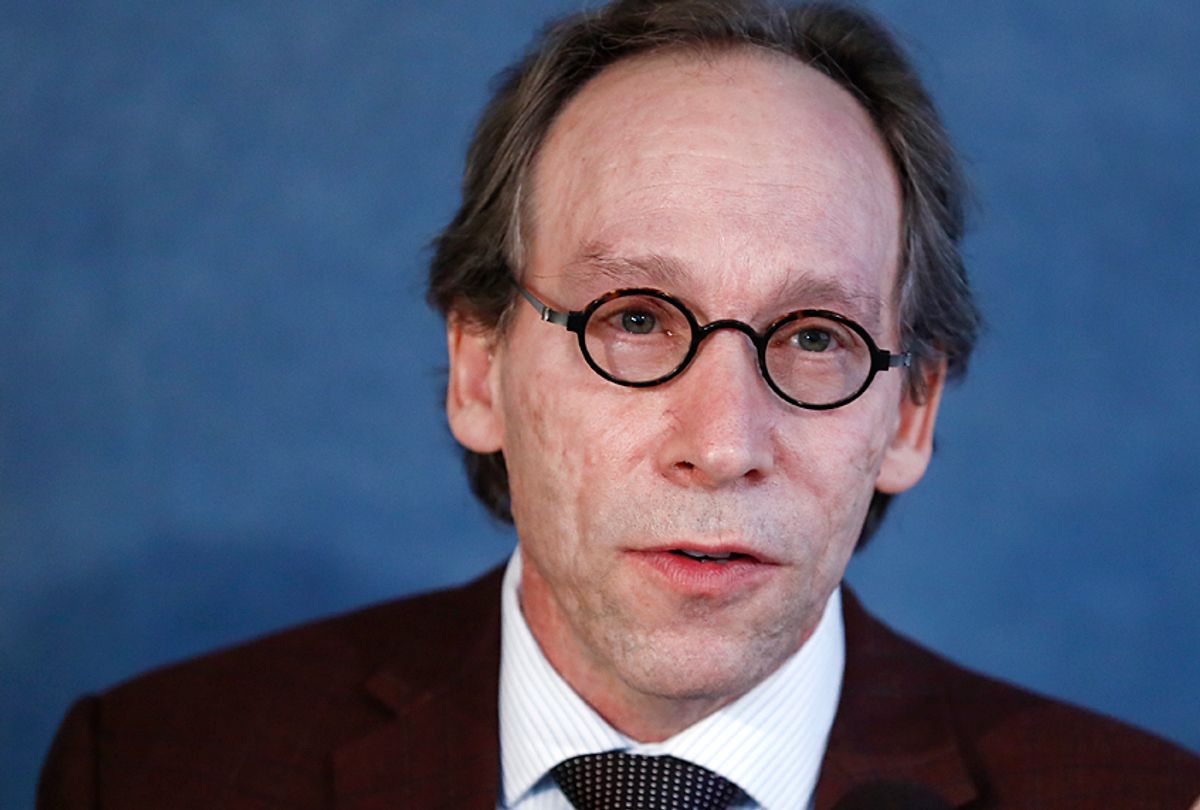 In mid-February, #MeToo came to the community of activist atheists and science promoters, known as skeptics, a vibrant if somewhat insular subculture of the non-faithful. Buzzfeed published an expose of Lawrence Krauss, a physicist who became a minor celebrity due in part to his outspoken atheism, in which multiple women shared tales of his alleged sexual abusiveness. Krauss denies the multiple, separate accounts painstakingly detailed by Buzzfeed's reporters. However, Krauss is still facing a litany of professional repercussions: cancelled appearances, disavowals (most prominently by the American Humanist Association) and investigations into the accusations.

But for many in the skeptic movement, Krauss's reckoning, while welcome, feels like too little, too late. For years, these activists told Salon, they've been agitating against sexual harassment in the community and trying to expose the abusive behaviors of many prominent figures. For their efforts, they have been harassed, demoralized and often shunned — while the accused, including Krauss, continue to enjoy honored status in the community. Some of these atheists hope that Krauss' outing represents a turning point in their movement, but others worry that the hostility towards women speaking out is calcified and nothing substantial will change.

The conglomeration of humanist organizations and superstition debunkers going under the name "skeptics" has existed for decades, but in the mid-2000s, there was an explosion of interest from people ready to agitate for a more secular society. Inspired by Richard Dawkins's 2006 bestseller "The God Delusion" and disgust with the Bush administration's repeated attacks on religious freedom, this new influx of humanists brought a new spark and aggressiveness, an eagerness not just to defend secularism, but to argue for the rightness of atheism and create a community of fellow travelers.

"It got rid of the crushing feeling of loneliness I had,” Heina Dadabhoy, a blogger and outspoken atheist activist, recalled.

“When I left Islam, I felt I did an impossible thing," Dadabhoy said, adding that the community led her to meet "former religionists of other religions" and eventually even to connect with other ex-Muslims.

“I had a very difficult, very abusive upbringing in a home that was religious in a not-healthy way," said Alex Gabriel, another blogger and activist. "I need a godless community. I need that support network. I think a lot of other people do."

(Full disclosure: I also consider myself part of the skeptic community and have done a number of talks at conferences and universities about the intersection of feminism and secularism. So much of this story comes from firsthand experience, as well as discussions with sources.)

For a time, things were going swimmingly. Atheism was getting multiple rounds of media coverage, conferences were expanding in size and number, and word was getting out that it's OK not to believe. There was a rapid rise in the number of Americans, especially young Americans, who say they have no religious affiliation. But soon there were grumbles of discontent in the movement, especially with the way the leadership appeared to be predominantly older, white men, and with the way that movement leadership avoided larger social justice issues related to secularism, such as reproductive rights or fighting the religious right's racism.

And then there was the way women were being treated.

"Institutionalized sexual harassment and erasure of the voices and the lived experiences of people of color and women of all ethnicities is something that is absolutely endemic" to the community, said Sikivu Hutchinson, a writer and founding member of Black Skeptics Los Angeles.

"Women would show up to events and we would be treated as meat instead of participants in the movement," explained Stephanie Zvan, a writer and co-host of "Atheists Talk" in Minnesota. Zvan's response to the issue is rooted in her sensibility as an organizer. She started advocating for organizations to create codes of conduct for events, complete with consequences for sexual harassment.

Rebecca Watson, the founder of Skepchick, tried a slightly different approach. In 2011, she put out a video detailing how a man followed her into an elevator at 4 a.m. at a conference and hit on her, which she said made "me incredibly uncomfortable".

The women expected a positive reception for these gentle requests for basic respect, but Zvan said, "What happened instead was a massive backlash, and frankly, eventually, a pretty successful one."

"There was a big rise of people who decided that wasn’t good and that feminism was bad and that they had to harass women," explained Monette Richards, the president of Secular Woman, which was created in large part as a response to the hostility that feminists were experiencing.

Richards called it the "Great Rift," a divide that erupted between women who "were saying, no, we are not debating feminism," and those who were either outright anti-feminist or those afraid "to embrace the feminists or feminism, because they felt that they would be shunning a lot of the people who were anti-feminist."

A massive harassment campaign formed, organized primarily through a forum called the Slymepit, targeting anyone who spoke up against harassment or for feminism with a barrage of online abuse. It was, in many ways, a precursor not just to Gamergate, but to the army of Donald Trump-loving alt-right trolls on social media that followed. They employed the now-familiar tactics of dogpiling on Twitter, creating photoshopped memes to mock their targets, doxxing and ruining people's Google search results to make them unemployable.

But while that was terrible enough, what was really upsetting was the lack of support from institutional atheism and, in many cases, leaders exhibiting outright complicity with the harassment.

Dawkins, who runs a foundation to promote skepticism, mocked Watson, accusing her of overreacting with her mild exhortation to "don't do that." He suggested she had no right to complain because a "Muslima" isn't "allowed to drive a car" and will "be stoned to death" for adultery. When he was criticized for these comments, his responses appeared increasingly defensive, and Watson says he demanded that she be removed from the speaker roster at an event at which he was scheduled to appear.

Other leaders found more subtle methods to quiet down the feminists. At the 2013 Women in Secularism conference (organized by one of Krauss' accusers, Melody Hensley, through the Center for Inquiry), the then-head of Center for Inquiry, Ron Lindsay, used his opening remarks to shame feminists for speaking out.

He opened with preliminary remarks admitting that that the "the subordination of women" is bad, but swiftly Lindsay turned to the topic at hand, which is his belief that women are doing feminism wrong. "I am concerned the concept of privilege may be misapplied in some instances," he complained, warning about "the dogmatist who wants to silence critics." Men were being silenced, he fretted, with all this talk of privilege and feminist anger, and "enforced silence is also a way of robbing someone of their humanity." (He eventually issued an apology.)

Accusations of inappropriate behavior toward women started to escalate. Scientist Jen McCreight mentioned, at the first Women in Secularism conference, that there was a whisper network of women warning each other about the men who were creeps in the movement. For her effort, online harassers drummed her out of the movement. A Tumblr was started, and then taken down, for anonymous accusations — a precursor to the "Shitty Media Men" list of the #MeToo movement. Blogs and social media accounts started hinting that specific men had done a lot more than creep someone out in an elevator.

Soon, actual names were being attached to allegations, and reporters investigated. Some men lawyered up and started issuing litigation threats.

“There were very few people who were willing to stand up for our speech," Zvan said. The same leaders who were worried that men would be silenced by women talking back to them online had little, if anything, to say about women being silenced with harassment campaigns or threats of litigation.

“Where do you draw the line?" Dadabhoy asked, noting, for example, that she abandoned a relationship with the secularist Sunday Assembly when they invited Michael Shermer to speak after Buzzfeed published a story about him that included an accusation of rape.

“I lost friends over this," Gabriel said, noting that many people in the movement who were "not part of the army of misogynists" still "were talking about mob rule and witch hunts and all of that."

“There are a bunch of women who left entirely," Richards said. “I’ve seen a lot of women, especially, leave to go work with UU churches and stuff, because they would rather work with the faithful who aren’t jerks about harassment than they would be in a movement that condones harassing."

I, too, consider myself someone who simply left, feeling like my time and energy was wasted in a space that simply doesn't take the issue of sexual harassment seriously.

“We have lost so many opportunities to connect in meaningful ways with this next generation of non-believers," Zvan said, noting that the younger generation is more racially diverse and gender-balanced. "But it’s not at all what we look like. Not at all. We look like a movement of old white men, because most of the choices we have made were to make the movement more accommodating to old white men."

Zvan notes that, "the more classic movement that has stayed in place seems to have suffered" because of this recalcitrance to deal with the sexual harassment issue, as well as larger issues with sexism and bigotry.

Dadabhoy, who is not yet 30, said, "I’m still marginally involved," but that she has "publicly and privately disassociated" herself from a lot of organizations and writes and tweets much less about atheism, often focusing instead on her work as a kitten foster.

Others have stuck in the movement, both trying to change the existing organizations and creating their own, like Secular Woman. In some ways, they argued, progress has been made. Hutchinson highlighted the upcoming Secular Social Justice conference held by the American Humanist Association. Richards noted that Secular Woman is having a training seminar of their own this summer.

Still, Richards felt that there is still a huge amount of institutional resistance to feminism, noting that Secular Woman got disinvited from an annual meeting of secular organizations, after members spoke up about these issues. The reaction to Buzzfeed's story about Krauss is disheartening, as well. While the American Humanist Association issued a statement of support for Krauss' accusers, Center for Inquiry still has Krauss as an honorary board member. The Richard Dawkins Foundation for Reason & Science have been silent, even as the foundation's Twitter account snarked, "The #Bible is disturbingly unaware of the concept of 'bodily autonomy'."

(Separate inquires to both organizations went unanswered. The Dawkins foundation is part of Center for Inquiry.)

"I had something to say. I still do," Dadabhoy said, noting that she had a "singular and unique" voice in a movement where ex-Muslims are still relatively rare. "I do miss what I had when I was traveling around the country and meeting all these people and doing all this cool stuff and just really connecting with the people and the audience."

"I wish I could keep doing that.”