Beatty and Dunaway are back, and they're announcing best picture again

Ensnared in of the most controversial scandals in Academy Award history, this duo is getting a second chance 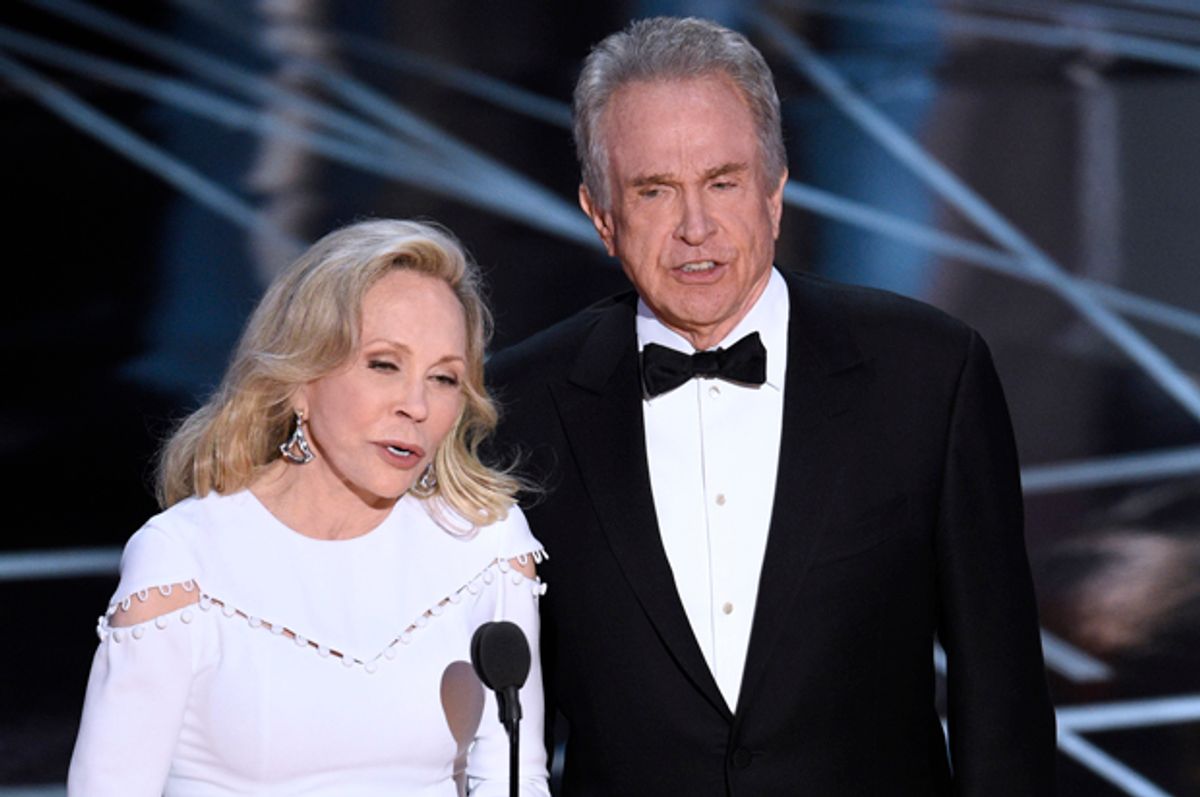 Faye Dunaway and Warren Beatty present the award for best picture at the Oscars on Sunday, Feb. 26, 2017, at the Dolby Theatre in Los Angeles. (AP/Chris Pizzello)
--

Warren Beatty and Faye Dunaway, who were ensnared in of the most controversial scandals in Academy Award history last year, are getting a second chance. The duo, who infamously announced the wrong best picture winner, is expected to return to the Oscar stage this Sunday for a do-over.

Beatty and Dunaway have already started practicing their lines, appearing for rehearsal last night at the Dolby Theatre, according to The Hollywood Reporter.

In honor of the 50th anniversary of Bonnie and Clyde in 2017, the stars of the classic film were invited to name a new best picture. After an envelope mix up by on-site accountants from PricewaterhouseCoopers (PwC), the night's top prize was initially awarded to "La La Land" over "Moonlight" by mistake.

The envelope that Dunaway read from belonged to the best actress category. "I opened the category and it said, Emma Stone, 'La La Land.' That's why I looked at Faye, and at you. I wasn't trying to be funny," Beatty clarified on camera at the time.

PwC, which has counted the ballots for the Academy for more than 80 years, claimed full responsibility for the blunder. "The presenters had mistakenly been given the wrong category envelope, and when discovered, was immediately corrected," a PwC statement read at the time.

Several weeks later, the board of governors of the Academy of Motion Picture Arts and Sciences announced they would stick with the firm in spite of the envelope snafu.

The Academy has since revealed new safeguards to prevent a similar mistake from repeating. The protocols include the re-installment of Rick Rosas, a PwC partner who previously handled envelope duty for 14 years, and Kimberly Burton from the company's Los Angeles office. In addition, a third accountant will be stationed in the control room, who will know the winners in advance, ensuring a more rapid response in the event of another error.

The two PwC accountants who were backstage last year, Brian Cullinan and Martha Ruiz, will not return. In addition, the Academy announced it would be banning electronic devices backstage. Cullinan notoriously posted a celebrity photo on Twitter backstage minutes before handing Beatty the wrong envelope, which set off the disastrous chain of events. The Academy also stated it would improve the identification of categories on the awards envelopes.