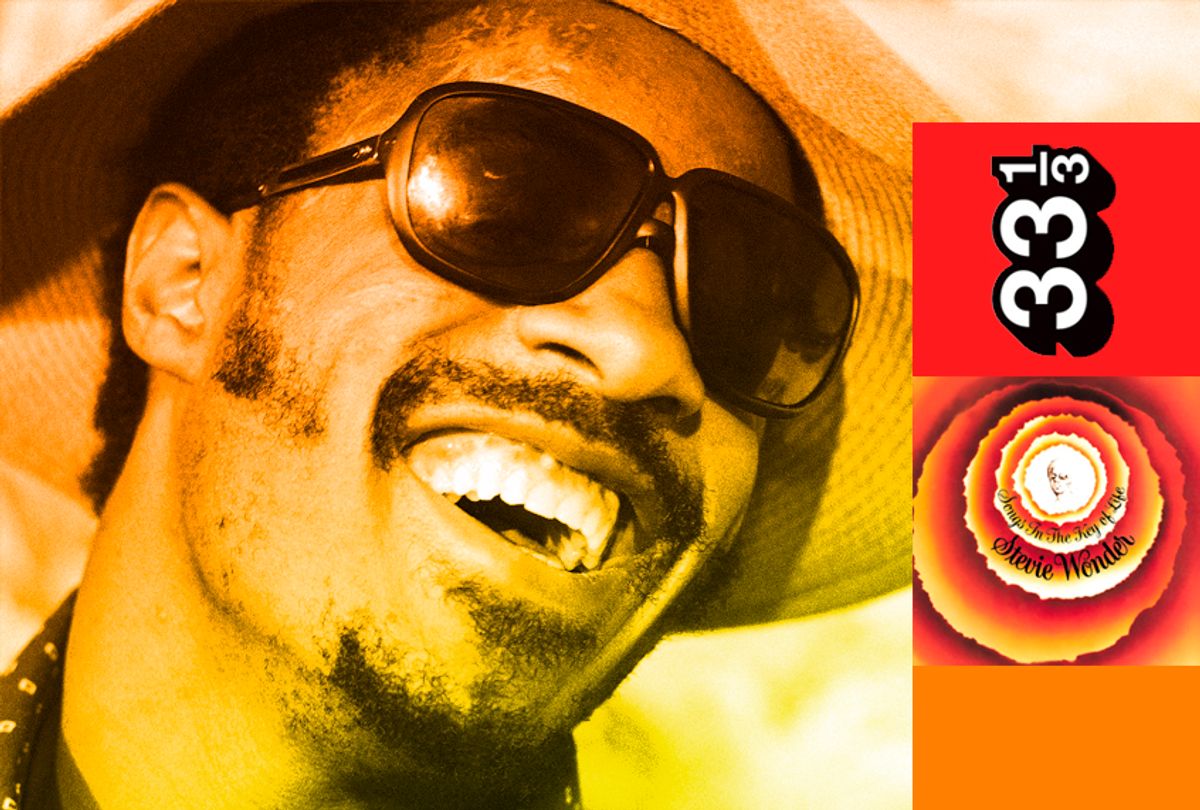 Excerpted from "Stevie Wonder's Songs in the Key of Life" by Zeth Lundy (Continuum, 2007). Reprinted with permission from Bloomsbury Publishing.

Stevie Wonder's unique adolescence was compounded by Motown's interest. His childhood was a prolonged preening for lifelong stardom at the will of Motown president Berry Gordy. Motown, aka “The Sound of Young America”: a charm school for the pop charts; a fantastical place for a formative upbringing, to be surrounded by the likes of Smokey Robinson, Marvin Gaye, Diana Ross and James Jamerson. Wonder's professional name, given to him by Gordy (the exact story has morphed into a number of possible truths), called attention to the near-miraculous talents of a blind youth like the frantic hype-monger peddling a sideshow attraction at a traveling carnival. Little Stevie Wonder, the twelve-year-old genius! Motown, the emphatic barker and Wonder its logic-defying prize.

Through proximate osmosis, Wonder absorbed the styles of his label mates: Gaye's paced delivery, Ross's effervescence, Robinson's delicacy with the minutiae of song structure. His impersonations transcended parlor-tricked mimicry; they became so legendary among Motown's artists that the imitated and imitator were hard to separate. The perpetual cheerfulness that Wonder exuded became a sort of omnipresent characteristic that added another generational dimension to the familial togetherness of the label's public edifice. At a time in his adolescent life when thinking creatively wasn't necessarily a viable option, he instead sought out an idiosyncratic presence in the established molds that had been set up by his employers. In less than a year from the date of his first single release, that idiosyncratic mold secured Motown the second #1 song in its history with 1963's “Fingertips, Pt. 2"; the album it came from, "The 12 Year Old Genius" (featuring Gaye on drums), would also be the label's first #1 LP.

In truth, the deal struck between artist and label reaped only one-sided benefits for almost ten years. The contract that Wonder's mother signed not only permitted a company lawyer to act as his legal guardian, it tied up the majority of his earnings in a trust fund until he turned twenty-one. This wasn't an uncommon practice at Motown; most of its acts signed away publishing and performance royalties when they came aboard. Wonder's deal afforded him the rather paltry allowance of $2.50 per week. So when “Fingertips, Pt. 2" went to #1 in 1963, when “Uptight (Everything's Alright)” peaked at #3 in 1966, when “I Was Made to Love Her” shot to #2 in 1967, when “For Once in My Life” hit #2 in 1968 and “Signed, Sealed, Delivered I'm Yours” made it to #3 in 1970, Wonder only collected a couple of bucks. Although that weekly allowance was hardly the most generous of rewards, the untouchable accumulation of royalties would end up serving an unexpected (or, perhaps, premeditated) purpose when Wonder came of age.

Like Orson Welles before him, Wonder was declared a child genius, a public designation that has arguably affected the way in which he's worked (and, consequently, what has been expected of that work). Just as Heisenberg's Uncertainty Principle illustrates that an observed object is inextricably changed by the mere observation, so do people change when they're pronounced as unique. Both were young prodigies who were handed the keys to their respective kingdoms at early ages and, perhaps due to the freedom granted to cultivate their abnormal minds, released their most potent creative steam while still in their twenties. Where Welles quickly torched his own career in a vehemently proud blaze of glory, Wonder could do no wrong. Surely RKO execs rued the day they ever greenlighted Welles's every wish on "Citizen Kane"; conversely, Gordy probably remembers writing that multimillion dollar check fondly. Affording creativity (or, genius) the means to realize its dormant ambition is a calculated risk—a risk made justifiable when the public offered eager validation with its wallet.

Wonder had an admirable string of hits in the 60s, roughly one smash per year during the latter half of the decade. There could have been more—Wonder would have bloomed much earlier in the public eye, but he made a conscious decision to withhold many of his best ideas from Motown beginning around the time he turned eighteen. He recognized that his ideas were, according to the legal documents, not really his at all, but Motown's, and he had the foresight to compartmentalize. He stockpiled songs in his head, revelatory secrets kept away from those who sought to profit off them. Wonder's artistic transformation was occurring in utter privacy. Everyone, including his employer, Would have to wait until he was no longer a minor before they got a glimpse.

In the meantime, Motown was readying Wonder to be, for all intents and purposes, a Vegas act. Wonder's live act was in step with Motown's dinner-theater aspirations (à la the Supremes' "The Supremes Sing Rodgers & Hart" [1967]); he was leading big bands through uptight versions of hit singles the Detroit brass hoped he could pawn off in perpetuity. As his moment of official maturity approached, Wonder made his artistic intentions incredibly clear in both his words and his actions: he pointed to the Temptations' psych-funk single “Cloud Nine,” released in late 1968, as an ideal creative direction for both himself and Motown; and, in 1970, he released his version of the Beatles” “We Can Work It Out,” the first track he performed, produced and arranged completely by himself. Though no one yet knew it, the former song provided a conceptual template for his work throughout the 70s, and the latter demonstrated how his hands-on style would function. Even Motown's stylistic adjustments in the 70s, spurred by the efforts of artists like Wonder and sometimes referred to as “the greening of Motown,” was emblematic of its own transition away from an adolescent model it had held onto for far too long.

Before Wonder engaged in a symbolic contractual standoff that would usher him into the groundbreaking work of his early adulthood, he released "Where I'm Coming From" (1971). It was the first LP Wonder had produced and performed entirely on his own, and the first time he was granted complete creative control from Gordy. Both its lyrical content (inspired by the ongoing Vietnam debacle) and musical tenor (distanced from the lo-fi Motown aesthetic) indicated a major shift in the ideas and sounds Wonder had become interested in pursuing. Though it was far from Wonder's most successful album, "Where I'm Coming From" was extremely important as a precursor to a new deal. It completely obliterated any semblance of Little Stevie Wonder that remained on someone's antiquated radar screen.

On May 13, 1971, the day Wonder turned twenty-one—the day he officially came of age and could, in the eyes of the law, leave adolescence forever—Gordy hosted a big birthday party to celebrate the occasion. The next morning, Wonder had his lawyer notify Gordy that he was terminating all of his Motown contracts and taking control of the eight-year trust fund, which had grown up to over $1 million. By the time the message was delivered, Wonder had already fled Detroit for New York City, where he had booked a room at the Holiday Inn on West 57th and studio time at Jimi Hendrix's Electric Lady Studios. His collected earnings were dumped into the production of what would become "Music of My Mind." For the first time in his life, he was making a record that would be funded and nurtured entirely by himself.