Closing the circle of collusion

The White House is surrounded by a phalanx of investigations, indictments and guilty pleas 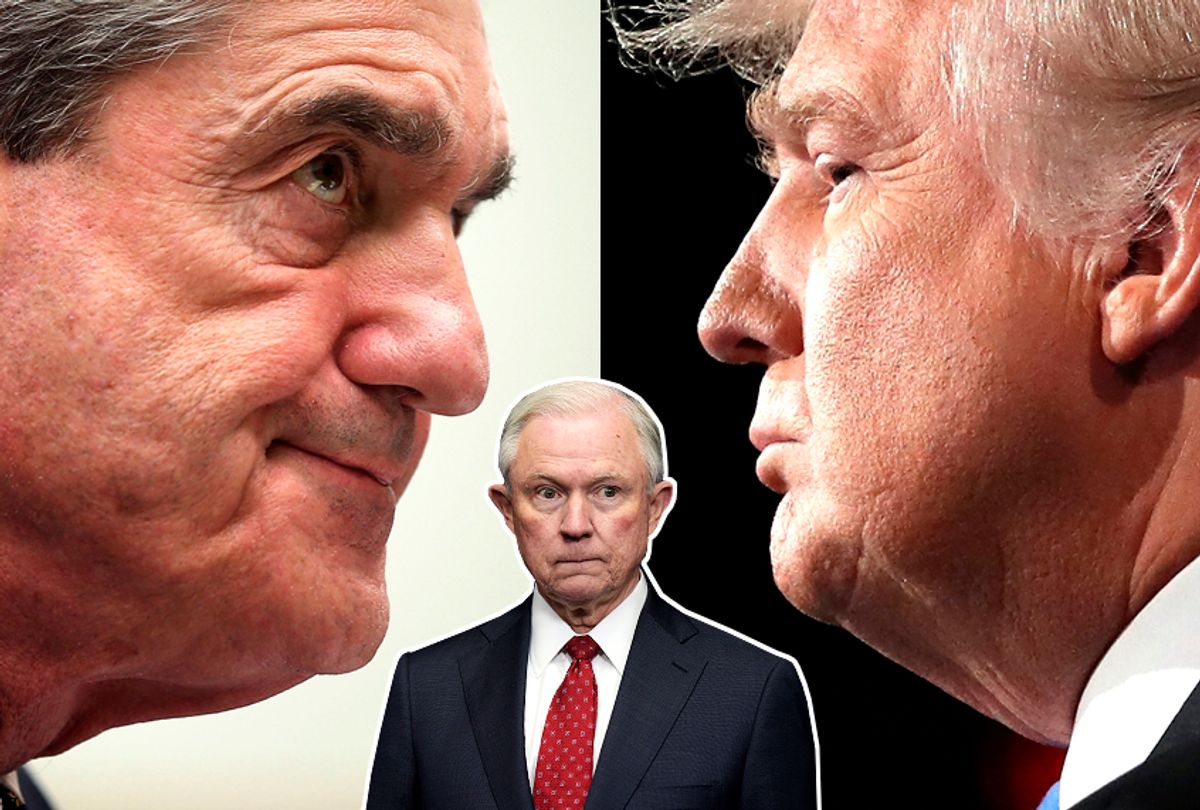 They’re really beginning to pile up, aren’t they? Surprise, surprise! They all have one thing in common.

Michael Flynn: Former National Security advisor pled guilty to lying to the FBI about his contacts with . . . Russians.

George Papadopoulos: Former Trump campaign advisor pled guilty to lying to the FBI about his contacts with . . . Russians.

Rick Gates: Former Trump campaign deputy chairman and organizer of inauguration pled guilty to lying to Mueller’s investigators about a 2013 meeting his partner Paul Manafort had concerning the Ukraine with a congressman known to be pro . . . Russia.

Paul Manafort: Former Trump campaign chairman indicted on multiple counts of money laundering, bank fraud, tax evasion, and failure to register as a foreign agent. The money he laundered came from the foreign government and political party he failed to disclose he was representing, the government of the Ukraine and its Party of Regions, both identified as pro . . . Russia.

Alex van der Zwaan: Lawyer who worked in the Ukraine with former Trump campaign aides Manafort and Gates, pled guilty to lying to Special Counsel Robert Mueller’s investigators and concealing an email from an unidentified person in the Ukraine. Van der Zwaan is the son-in-law of German Kahn, a prominent oligarch from . . . Russia.

Thirteen individuals: Indicted by Mueller for conspiracy to defraud the United States, conspiracy to commit bank and wire fraud, and identity theft. All are citizens of . . . Russia.

This week saw reports that Mueller is preparing indictments of the people and entities responsible for stealing the emails of the Democratic National Committee and Clinton campaign chairman John Podesta. All have been previously identified by U.S. intelligence agencies as being from . . . Russia.

Also this week it was revealed that Mueller’s investigators have been questioning people about whether Trump as a candidate had advance knowledge of the released emails stolen from the DNC and Podesta. All of the people questioned have worked for either the Trump campaign, the Trump transition team, the Trump White House, or all three. The emails stolen from the DNC and Podesta are known to have been stolen by . . .  Russians.

As the noose tightens around President Trump and the White House, what have they used to defend themselves from charges that they were involved in stealing the presidential election of 2016? A blizzard of lies about their contacts with . . . Russians.

There are currently 195 countries in the world. If you subtract the United States, that leaves 194. Which country of the 194 has the Trump campaign been accused of colluding with; which country did they lie about over and over and over again, denying they had had any contacts with? Hmmm . . .  let’s see if I can remember . . . oh yeah! Russia.

It turns out that the collusion was there all along, right in front of us. Let’s begin with Trump’s press conference in Doral, Florida, when he came right out and talked directly to which country? Oh, yeah, Russia. He challenged Russia to give him Hillary Clinton’s emails: “Russia, if you're listening, I hope you're able to find the 30,000 emails that are missing. I think you'll be rewarded mightily by our press.” That press conference was on July 27, 2016.

Let’s have a look at what had been going on with the Trump campaign just before he issued that challenge to Russia.

On June 1, George Papadopoulos emailed Trump campaign chairman Corey Lewandowski that he had a “Russian MFA” who wanted to set up a meeting between Trump and Putin.

On June 3, at a campaign rally in Redding, California, Trump said, “Putin said Trump is a genius and the next great leader of the United States.” Also on that date, Donald Trump Jr. received an email from a contact in London offering to set up a meeting with a Russian lawyer close to the Kremlin who promised “official documents and information that would incriminate Hillary. Don Jr. emailed back, “I love it.”

On June 7, after winning the New Jersey primary, Trump promised that “next week” he would give a major speech “discussing all of the things that have taken place with the Clintons.”

On June 9, Don Jr., Paul Manafort and Jared Kushner met with the Kremlin-connected Russian lawyer and three other Russians at the Trump campaign headquarters in Trump Tower.

Also on June 15, at a meeting of top Republican House leaders, Majority Leader Kevin McCarthy said, “There’s two people I think Putin pays: Rohrabacher and Trump,” referring to California congressman Dana Rohrabacher, known to be a defender of Putin and the Kremlin.

On June 19, Papadopoulos emailed a top Trump campaign official and told him that “The Russian ministry of foreign affairs messaged and said that if Mr. Trump is unable to make it to Russia, if a campaign rep (me or someone else) can make it for meetings? I am willing to make the trip off the record if it’s in the interest of Mr. Trump and the campaign to meet specific people.”

On June 20, Trump fired campaign manager Corey Lewandowski and elevated Russia-connected Paul Manafort to campaign chairman. Lewandowski told the AP that Manafort had been “in operational control” of the campaign since April 7.

On July 6, more DNC emails were leaked by the Russians.

Only July 7, Trump campaign chairman Manafort sent an email using his Trump campaign account to a former partner of his in Moscow, Konstantin Kilimnik, offering to give briefings on the Trump campaign to Russian oligarch Oleg Deripaska, a man whom he owed $19 million.

Also on July 7, Trump campaign adviser Carter Page traveled to Moscow, where he gave a pro-Russian speech and met with Igor Sechin, chairman of the Russian state-owned oil giant Rosneft, and Igor Diveykin, a top Kremlin official. Page allegedly discussed lifting the sanctions imposed by President Obama on the Russian oil company. According to the Steele dossier, Diveykin told Page the Kremlin had “compromising information” on Hillary Clinton they would be willing to share with the Trump campaign. In their later application for a FISA warrant on Page, the FBI and Department of Justice told the court that they had developed “additional information obtained through multiple sources that corroborated Steele’s reporting” on Page’s meetings with the Russians.

On July 14, Papadopoulos emailed an official with high Kremlin links that the Trump campaign had approved a meeting between a campaign official and representatives of the Russian government.

Also on July 14, the Trump campaign succeeded in changing the so-called “Ukraine plank” in the Republican National Platform from being pro-Ukraine to being pro-Russia.

On July 24, interviewed on ABC’s “This Week,” Paul Manafort denied there were any contacts between the campaign and Russians.

On July 25, Trump sent out this tweet about the DNC emails stolen by Russia: “The new joke in town is that Russia leaked the disastrous DNC e-mails, which should never have been written (stupid), because Putin likes me.”

On July 31, according to the Democrats’ response to the so-called “Nunes memo,” the FBI opened its counterintelligence investigation into the Trump campaign after receiving information from the Australian intelligence service that George Papadopoulos had bragged in March to one of its ambassadors in London that the Russians had Hillary Clinton’s emails and were going to release them. Within seven weeks, according to the Democrats’ memo, the FBI would have five people in the Trump campaign under investigation. As of today, three of them have pled guilty.

That covers only two months of the Trump campaign. Just think of the lies and indictments and guilty pleas that were to come.

Collusion was right in front of us all along. Putin had a huge interest in getting the Obama sanctions lifted. He and his oligarchs were losing hundreds of billions if not trillions of dollars because of Obama’s sanctions on Russian oil deals. Because the sanctions outlawed the state-owned Vnesheconombank from doing business in the U.S., they lost their primary method of laundering money and getting it out of Russia.

Trump needed dirt on Clinton. The hacked emails provided the dirt and became the main campaign theme behind “crooked Hillary.” The Russians had the emails and gave them to WikiLeaks. Trump would go on to mention the emails or scream “I love WikiLeaks” from the stump more than 145 times in the closing months of the campaign.

Trump also needed someone who knew the Russians, had phone numbers, could talk to them, someone who had spent a good part of his career in the world of these Ukrainian and Russian oligarchs. He hired Manafort. He needed someone who hated Obama and would work with the Russians to lift the Obama sanctions. He hired Michael Flynn. He needed others with Russia connections. He hired Page and Papadopoulos. In the background, hovering around at the Republican convention, at Trump’s big foreign policy speech at the Mayflower hotel, visiting Sessions in his Senate office, meeting with Carter Page and Michael Flynn, was Russian ambassador Sergey Kislyak.

The collusion noose is tightening around the White House. And what do they have in there to defend themselves? The same old pack of lies. Meetings with Russians: What meetings with Russians? Collusion: What collusion? No collusion! No collusion! I’ll bet before this thing is over, we’re going to find that Manafort and his Russian pals squirreled away a whole passel of bucks somewhere for Trumpy.

More than 40 high-level people have fled or been fired from the Trump administration in its first year, and even more are headed for the exits. They know what’s up. He’s dirty. He’s guilty. There’s no use in sticking around.

When it’s over, this thing is going to make Watergate look like a cup of spilled milk in Mr. Rogers’ neighborhood. I don’t know exactly when it’s going to happen or how, but he’s on his way out.