“The Looming Tower”: A pre-9/11 thriller for the post-facts world 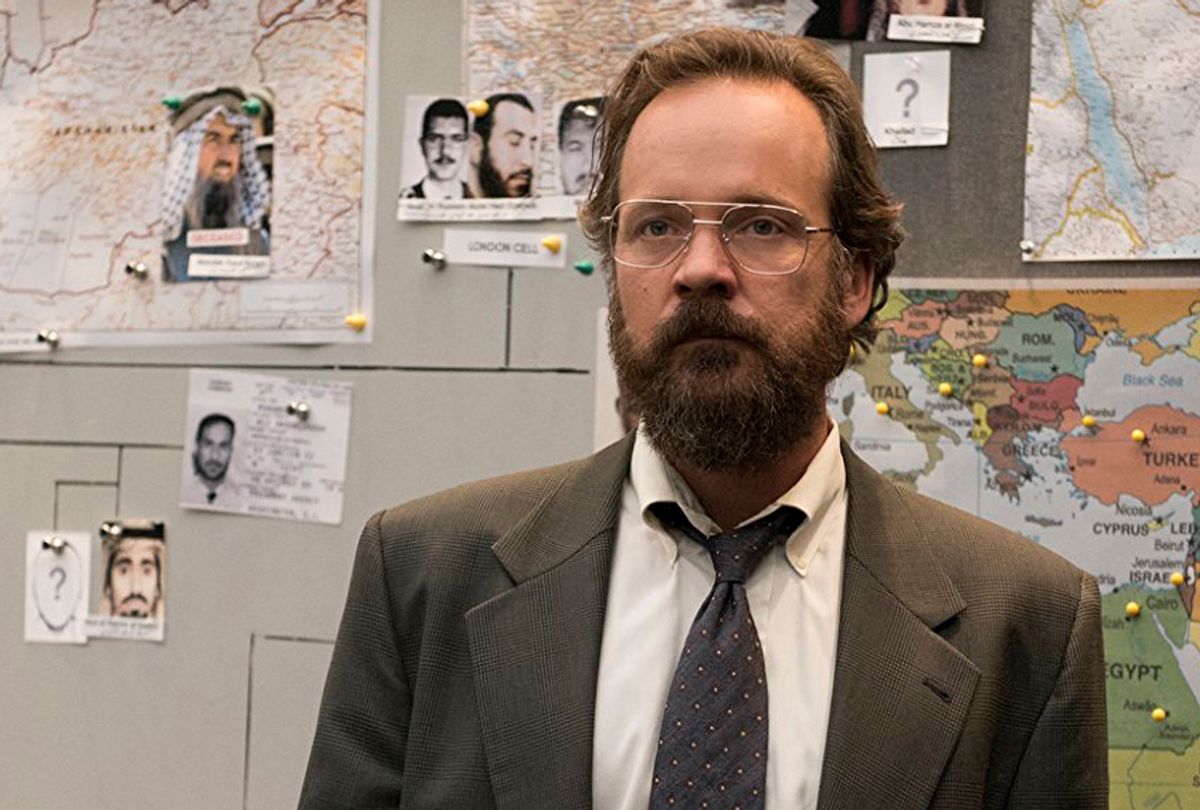 Given the clockwork precision with which media junkets are typically run, it’s rare, and a bit weird, for a journalist to be pulled back into a hotel suite after their allotted time has expired.

But Dan Futterman, writer and executive producer of Hulu’s new 9/11 procedural “The Looming Tower,” does just that, yanking me into a lavishly decorated antechamber in the mega-luxe Regent Hotel in Berlin, where “The Looming Tower” has just premiered to audiences at the annual Berlin International Film Festival. “I wanted to say something else,” says Futterman, a bit flustered. “It’s this: if there is pushback, it better come with information.”

Futterman is aware that “The Looming Tower,” an espionage drama adapted from Lawrence Wright’s Pulitzer-winning 2006 nonfiction book “The Looming Tower: Al-Qaeda and the Road to 9/11,” is high-voltage material. Tracking the FBI and CIA’s mid-’90s turn toward the mounting seriousness of Islamic extremism, and the breakdowns (and betrayals) that left America vulnerable, “The Looming Tower” is a wholly politicized work. And such works tend to play right into the hands of ideologues, eager to shift blame between government institutions, or across political aisles.

Just think back to 2012, when director Kathryn Bigelow and screenwriter Mark Boal’s thriller “Zero Dark Thirty” catalyzed a debate about the use of torture in capturing Osama bin Laden. “That was at the very center of a big fight between the FBI and the CIA,” says Futterman of the “Zero Dark Thirty” controversy. “That was a big fucking deal. So if you’re going to make a movie about that, you have to get that right. I mean I love [Bigelow and Boal] as filmmakers, but that’s a big deal.”

Despite fictionalizing a dense nonfiction account, and succumbing to the necessary process of dramatization (creating composite characters, condensing timelines, etc.), Futterman’s anxiety is eased by what he sees as the show’s fealty to the book. Author Wright also serves as an executive producer. “When his book came out, it was hard for people to find a fault with it,” Futterman explains. “And we tell essentially the same story.”

One of the miniseries’ key narrative inventions is Martin Schmidt (played by Peter Sarsgaard), a shrewd CIA al-Qaeda analyst composited from several real-life agents. As Futterman puts it, Schmidt “represents a certain attitude in the CIA.” He’s frequently seen clashing with Jeff Daniels’ FBI counterterrorism honcho, guided by a belief that the CIA is the only institution with the know-how to put down foreign terrorist threats.

A deeply intelligent actor with a long list of credits playing the smartest guy in the room — an influential sexologist in “Kinsey,” a callous know-it-all husband in the 2009 horror flick “Orphan,” the cold-as-ice enviro-terrorist in Kelly Reichardt’s “Night Moves,” and the super villain in DC’s much-maligned 2011 “Green Lantern” movie, in which he plays a guy whose brain is literally swelling — Sarsgaard seems right at home with another character who plays his cards close to the vest, confident (and a bit arrogant) in his ability to outsmart all comers. “He is the smartest guy in the room!” Sarsgaard laughs over early morning coffee. “That’s the thing: Just because you know the answer doesn’t mean you have to act that way.”

Bickering, infighting and double-dealing between intergovernmental agencies may not seem like the stuff of high drama. But “The Looming Tower” feels daring. There is a longstanding lie in American politics that everyone devoted to public life is, in their own ways and despite cosmetic differences, working toward the same end. The institutional drama of “The Looming Tower” puts this lie to rest, showing how much of politics and statecraft, especially among unelected officials, is about plain power-jockeying.

It’s also a highly confrontational work. This is, after all, a mainstream television event with the verve to analyze America’s failure in preventing 9/11. “It’s been 17 years,” says Sarsgaard. “Ready or not, here we come.”

Films made in the immediate aftermath of the cataclysmic terrorist attack tended toward the funerary (Oliver Stone’s “World Trade Center”) or the immersive (Peter Greengrass’s “United 93”). Outside of conspiratorial “truther” docs and essay films, the idea of even examining the geopolitical forces that converged on 9/11 seemed not just unpatriotic, but gauche, like speaking ill of a recently deceased statesman, or poking their still-cooling corpse with a stick. Art and entertainment made in the early years of “post-9/11” were very much stories about The Event. “The Looming Tower” zooms out, subjecting the attacks to the historical long view. “I don’t think the actual event is that interesting,” Futterman confesses. “I don’t say that disdainfully for what happened that day. We know what happened that day. It’s the ‘how?’ and ‘why?’ of what happened that day.”

“In a time of grief, questioning things is not high on the priority list,” says Sarsgaard. “I’ve likened it to a relative who died and we don’t talk about the fact that he was addicted to drugs and that’s why he died. It’s like, ‘Now is not the time. We’ll talk about it later.’ It was like that for a very long time in the States.” Just look at Sarsgaard’s wife, actor Maggie Gyllenhaal, who was denounced in the media in 2005 for merely suggesting the United States was “responsible in some way” for the attacks. “The Looming Tower” brings this long-verboten suggestion to the fore. It’s all about this burden of responsibility.

This is not to say the series downplays Islamic extremism. By the end of the first episode, we see the 1998 al Qaeda bombing of the U.S. embassy in Kenya, an episode that drew attention to the rising threat of anti-Western jihadism. But one structural difference between the new miniseries and Wright’s source text is its early focus. Wright’s “Looming Tower” exhaustively detailed the life of Egyptian author and Islamist martyr Sayuid Qutb, whose anti-secular, anti-Western writing is credited with seeding contemporary Islamic extremism. As Futterman describes him, Qutb “was this strange little guy who was seemingly happy in America. Then had a very, very vile reaction to it.”

For the production team, a focus on Islamic extremism from the Islamic perspective might have proved too challenging for Western, and particularly American, viewers. “It actually drives me crazy,” says Sarsgaard, visibly exasperated. “If you did a show based on the first half of a the book, it’d be all brown faces. And it’d be tough to find the hero for an American audience. But it would be fascinating. The story of Qutb is one that every American should know.”

“The Looming Tower” is also unique in that it vests its tense, docu-dramatic thrills in the hands of a genuine documentarian, director Alex Gibney. As the director of “Going Clear: Scientology and the Prison of Belief” (also based on a Lawrence Wright book), “Client 9: The Rise and Fall of Elliot Spitzer,” and the little-seen film about contemporary cyberwarfare “Zero Days,” Gibney has proven a skilled explorer of knotty, institutional stories that come to shape the culture at large. Sarsgaard calls Gibney “very serious-minded” and “deeply investigative,” suggesting a hardened just-the-facts mentality that risks hampering what is ostensibly a dramatic television series.

That’s where Futterman comes in. As a twice-Oscar-nominated screenwriter (for 2005’s “Capote” and 2014’s “Foxcatcher”) he draws out the human drama that he originally recognized in Lawrence Wright’s source text. “Larry’s interested in people,” he explains. “He’s interested in how people shape history. A lot of the story details personal relationships. Yes, there were institutional issues between the FBI and the CIA; they were on missions that were not compatible. But there were human beings at the center of that. There was personal animosity that fit into that. And then at a certain point, human beings lied to other human beings, and withheld information.”

Futterman seems to hope — ambitiously, and a bit anxiously — that “The Looming Tower” will expose the American public to this fateful internal intrigue. While the FBI and CIA are agencies that rely, in some meaningful respect, on secrecy, he says there’s a tendency for them to smother the very debate the series hopes to stimulate under a weighted blanket of silence, with government higher-ups demanding a trust from the public that they’ve already squandered. In an era of “fake news” and “post-facts,” the recourse to verifiable information seems particularly essential.

“People say, ‘just trust us! It’s classified!’” Futterman says, frustrated. “This is a conversation that anyone’s willing to have, but it has to come with information.”