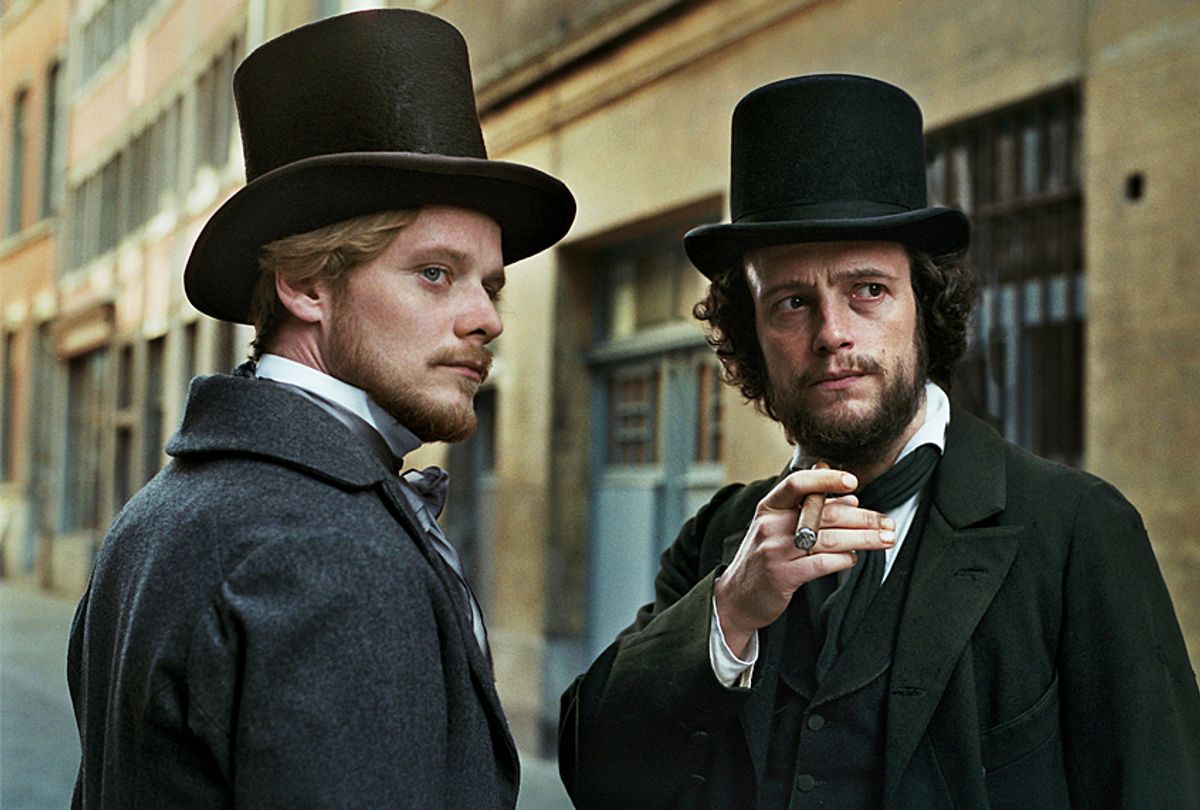 Karl Marx and Friedrich Engels play chess, engage in political debate and drink -- a lot. After Marx beats Engels in a chess game, they toast one another. "To minds that truly think and to free spirits!"

It is light outside when they start, but as empty glasses mount and frame the chessboard, day turns to night. Marx kisses Engels and they cheer again. Then, the scene cuts to Marx vomiting in a Paris street, repeatedly. It does not really help, though. But in a humbling moment of vulnerability and sickness from too much to drink, Marx turns to Engels. "You've made me realize something," he says. "Until now, philosophers have simply interpreted; interpreted the world, yet it must be transformed."

This is one of the most remarkable scenes from Raoul Peck's new film, "The Young Karl Marx." A 26-year-old Marx vomiting after a night of drinking and conversation with Engels is an insignificant detail in the span of his life and work, yet it serves as a rare and humanizing portrayal of one of the world's most complex political thinkers. The scene is profound not just because the reaction to liquor feels familiar as a depiction of a young person growing up, but because it powerfully grounds and demystifies the icon Karl Marx.

"The idea was how do I get to the people directly?" director and co-writer Peck tells Salon of the film, which opened in New York City and Los Angeles Feb. 23. "How do I push aside all the interpreters, all the talking heads, and bring back the human aspect of those incredible minds?" The biopic, which is the first Western film to tackle Marx, focuses on the younger, evolving philosophies and lives of Marx and Engels, as they navigate exile, censorship, poverty, surveillance and political unrest. And then, as the scene above illuminates, how they turned their scholarship into action — into the birth of a labor movement.

"The Young Karl Marx" is about the formation of ideas. It documents the origins of Marx and Engels' friendship and their burgeoning political ideologies about capitalism, industry and society at the end of the Industrial Revolution. A central component is also the influence of their relationships. Marx's wife Jenny, who hailed from a prominent wealthy family, essentially gave up her class status and security to be with Marx. And since Engels was the son of a well-off factory owner, his partner Mary Burns, a radical thinker and worker, was his entrée to the working class, which resulted in his foundational work "The Condition of the Working Class in England," among his other writings. For Peck, leaning in to the dynamics between Marx and Engels and their lovers helped to demonstrate how "They don't just talk the talk," he said, but "they were also leading a life that made sense to their ideas."

About 80 percent of the film's dialogue was taken from correspondence between Marx, Engels, Jenny Marx and Mary Burns between 1843 and 1850, Peck said. "It was, again, a way to go as directly as possible to them and to give them the voice," said Peck. "It's them telling their stories."

This made the film all the more personal, authentic and full-bodied for Peck, because the language in "The Young Karl Marx" did not derive from Marx and Engels' more theoretical or poetic ruminations, but from their feelings and ambitions communicated in letters to each other.

Beyond the dialogue, it is this connection to life that sets the film apart. "The Young Karl Marx" underscores the collaborative nature of ideas — showing that innovative ways of processing the world are not conceived in libraries or in isolation, but from people, and from real-life conditions and experiences.

"They have made those people untouchable. But they were not," Peck said of Marx and Engels. That is why the film includes humor, quips on their own behalf, like Marx telling Engels how Jenny comes from one of Germany's oldest, most respected families, yet chose to marry "the son of a converted Jew." Because so often Peck says he has witnessed political thinkers being portrayed as one-dimensional, with only unwavering dogmatism, glossing over the fact that "When you're political, you're engaged in life."

It is an embodiment Peck knows intimately, as he came to filmmaking through his own political engagement, evinced in the films he creates. Some of his past works include the Oscar-nominated "I Am Not Your Negro" about the famous black American writer James Baldwin, and "Lumumba," about the assassinated Congolese independence leader Patrice Lumumba.

"I can only work on topics that for me are part of my life at the moment and where I am at the very moment," Peck said, who was born in Haiti but raised in the Congo, and has lived in the U.S., France and Germany. His worldliness informs the vastness of his subjects. "I decided to make Baldwin and Marx almost the same year, and both films took me 10 years to make," he said. "Baldwin was an important fundamental in my life, and Marx, as well. It's thanks to their work that I can today analyze what is going on and I can have a position." Peck continued, "I can fight better. So my intention is really how do I put those instruments in the hands of a wider audience and, even more importantly, in the hands of the younger generation?"

While Peck has always engaged in radical filmmaking, it is his groundbreaking track record that continues to open doors. He says he is at a career pinnacle where, even for revolutionary work like a theatrical film about Marx, it is hard for the gatekeepers to tell him 'no.' "If I was a younger filmmaker I would never dare try to do that project. But I paid my dues," Peck said, though adding that he is not sure if "The Young Karl Marx" could have been green-lighted in the U.S. But his confidence is supported by his work ethic. "Whether my film is revolutionary or critical or efficient, I know I have to come up with a screenplay that they cannot attack," he said.

"The Young Karl Marx" ends with a montage of historical events that have followed since the labor of Marx and Engels. It shows footage of the First World War and the Second, the Vietnam War, Margaret Thatcher and Ronald Reagan, in office, Nelson Mandela free, and the 2008 financial crisis, emphasizing one of Marx's grounding principals: that capitalism is always in motion. For this reason, his crowning work, "Capital," was never finished.

"It was important to link all of this, because it's an ongoing history," Peck said, reminding me that the day that we spoke, Feb. 21, is the 170th anniversary of "The Communist Manifesto." "It's not just a story about the past, it's about today," he said. "And, as Marx wrote as well, the strength, the power of capital, is that it has the capacity to renew itself."

The ending is a familiar one for Peck. He concluded "I Am Not Your Negro" in much the same way, moving between Baldwin's poignant meditations on America, its self-professed identity and the way it has always treated its black citizens, to the police beating of Rodney King and the era of Black Lives Matter, to the epidemic of school shootings.

"My job is to make sure the younger people — they feel the power to question their world and to know that, well, you can change it, too, and there is work to do," Peck said. But he feels hopeful, especially by the organizing power and connectivity young people — specifically those who survived the Parkland shooting — have demonstrated in recent weeks. "Those young people in Florida saying: 'the NRA is financing the politicians,'" he said, and their acknowledgment that this is why gun safety laws are at a standstill, "well," Peck concluded, "that's a Marxist analysis."