"I Am Not Your Negro": James Baldwin's lesson for white America still hits home 50 years later

Raoul Peck's powerful, poetic documentary weaves together past and present, bringing an American prophet to life 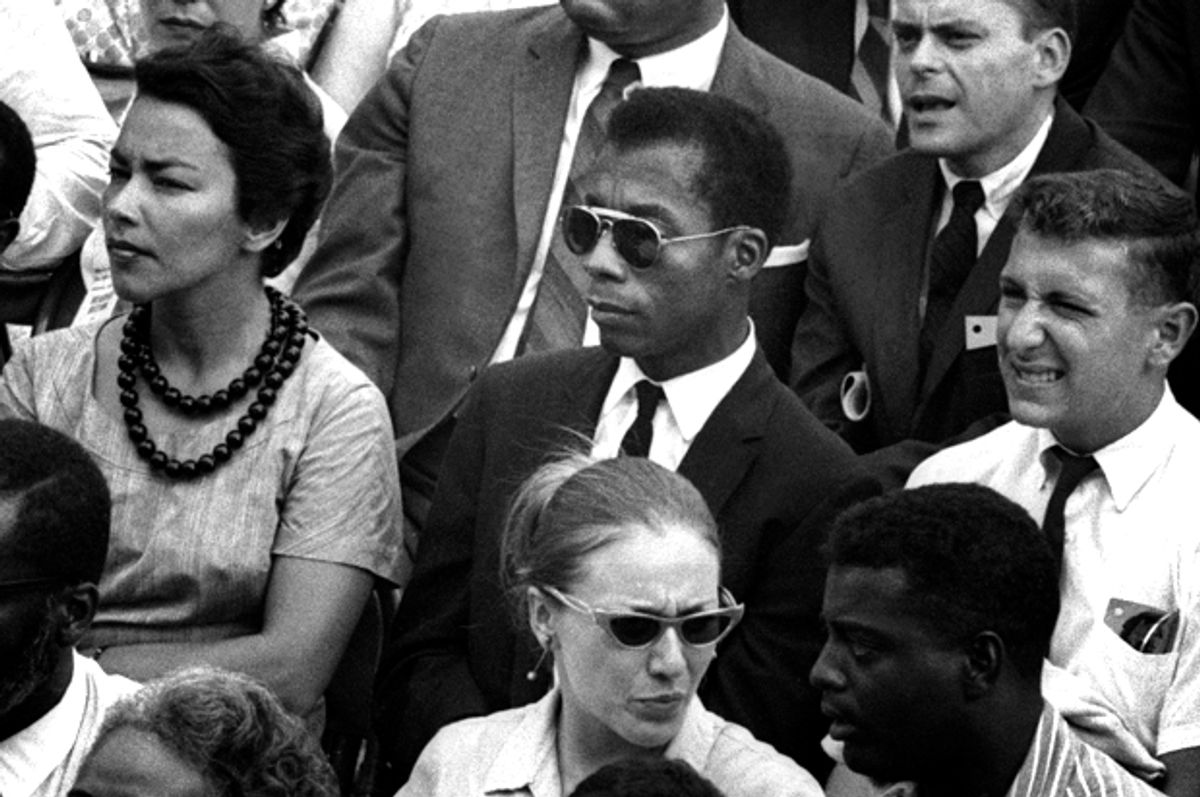 If 2016 is unlikely to be remembered as a banner year in American race relations — except perhaps in a negative sense — it was an extraordinary year for films about the African-American experience and the nature of the color line in our nation’s life. Raoul Peck’s Oscar-nominated documentary “I Am Not Your Negro” is not the most explosive of those films and surely will not attract a mass audience. But it’s an enormously resonant work of cultural history that should do much to renew attention to the lonely, prophetic voice of James Baldwin.

Nate Parker’s insanely ambitious “The Birth of a Nation” was supposed to be the Big Black Film of the year but failed to live up to its Sundance hype, partly because it wasn’t very good and partly because its director and star was swallowed up by controversy. But Barry Jenkins’ “Moonlight” and Jeff Nichols’ “Loving” were two of the fall’s best independent features, moving and beautiful explorations of subject matter that could have become tendentious edutainment.

Denzel Washington’s moody, haunting film version of August Wilson’s play “Fences” garnered Oscar nominations for Washington as best actor and the amazing Viola Davis as best supporting actress. Despite a seemingly unlikely premise and a relatively low PR profile, “Hidden Figures,” starring Octavia Spencer, Taraji P. Henson and Janelle Monáe as NASA mathematicians, will be one of Hollywood’s biggest success stories in an up and down year.

On the documentary side, the accomplishments have, if anything, been even more extraordinary. Three of five Oscar nominees for 2016's best documentary are films by black directors about black subject matter, which is surely without precedent. One of those, Ava DuVernay’s explosive “13th,” became the first documentary ever chosen to open the New York Film Festival. Another, Ezra Edelman’s ESPN miniseries “O.J.: Made in America,” which runs almost eight hours, strikes me as one of the finest achievements of old-school documentary journalism and perhaps the greatest film ever made about the contradictory effects of sports in American culture.

“I Am Not Your Negro,” the third of those films, belongs to a different tradition altogether. It both is and is not a documentary about Baldwin, the brilliant, exasperating and endlessly erudite black writer who belongs on any short list of the most important American intellectuals of the 20th century. It’s a lot of other things, too, including a visual-poetic essay tracing the startling threads of analogy between America in the mid-1960s and America today, as well as an attempt to interweave the stories of three prominent African-American leaders killed in that decade, whom Baldwin knew well: Medgar Evers, Malcolm X and Martin Luther King Jr. In the late '70s, Baldwin set out to write a book about those three men that he never finished. His fragmentary notes for that project, which he meant to call “Remember This House,” are the starting point for Peck’s film.

More than anything else, “I Am Not Your Negro” offers a reiteration of Baldwin’s essential challenge to white Americans: Stop worrying so much about black people and tend to your own garden. Whether whites felt hatred, fear or pity for their black fellow citizens, Baldwin variously and repeatedly argued, was not a matter of enormous historical consequence, since the results were approximately the same. (As Baldwin was acutely and sometimes uncomfortably aware, his primary audience was the white liberal intelligentsia — and his primary goal was often to fling the benevolent concern of that caste back into its face.)

Those conflicted emotions had almost nothing to do with black people themselves, Baldwin insisted, and everything to do with what he called “the moral apathy — the death of the heart” at the core of the American story. Even Baldwin could scarcely have imagined the depth of moral apathy represented by President Donald Trump, who makes a brief, blink-and-you’ll-miss-it appearance in Peck’s film (which was, of course, completed before the November election). As Baldwin saw it, white people’s inability to perceive their black neighbors as both fully human and fully American — as family, both literally and metaphorically — reflected their own self-hatred and lack of self-knowledge.

To be clear, the word Baldwin used in his most famous statement on this issue, paraphrased in Peck’s title, was not “Negro.” As he told black academic Kenneth Clark in a famous 1963 TV documentary called “The Negro and the American Promise” — the clip appears in Peck’s film — white people had yet to ask themselves a crucial question, let alone answer it:

What white people have to do, is try and find out in their own hearts why it was necessary to have a nigger in the first place. Because I'm not a nigger. I'm a man, but if you think I'm a nigger, it means you need it. . . . If I'm not a nigger here and you invented him — you, the white people, invented him — then you've got to find out why. And the future of the country depends on that. Whether or not it's able to ask that question.

I met James Baldwin once, right around the time he was trying to write “Remember This House.” He was the first famous person I ever interviewed, and I daresay none of the others I have ever met — authors, astronauts, movie stars, presidential candidates, the queen of Jordan — have affected me quite the same way. I don’t know how or why Baldwin wound up speaking at my suburban California high school, although it must have had something to do with the African-American activist and writer Richard Navies, who taught there at the time. I have no idea why Baldwin decided to give a few minutes of his time to a clueless student journalist or why he treated me with such kindness and generosity. I can promise you that after sitting there for an hour listening to him expressing little or no hope for the American future, and leveling withering accusations at white people, I was terrified.

In the film, Baldwin explains that he never felt any hatred for white people (although he sometimes wanted to), and rejected the simplistic racial politics of both the Black Muslim and Black Panther movements. I don’t think he saw an innocent young white person when he looked at me because he didn’t believe in such things. Perhaps he saw a white person who was thoroughly unaware of his own situation and who could not even conceive asking himself that question about the invention of the “nigger.”

I asked James Baldwin about his literary influences, and he did not tell me that was an inane question. Dostoyevsky, he said, and the Bible. Race came up only once in our brief conversation — and indirectly. I asked him what other books he remembered reading in his childhood, and he told me after he had read all the books in the Harlem branch of the New York Public Library he was issued a special card so he could go downtown to the main branch on Fifth Avenue, a privilege never before extended to a black child.

I asked a follow-up question: Did he really mean he had read all the books or just all the novels? He smiled — as you’ll see in the film, it’s a catlike, mischievous, strangely joyous smile — and said, yes, he meant all the books. He had read English novels and Russian novels and books about history and books about pond life, although at that age, he reflected, he had probably never seen a pond. Then he shook my hand and excused himself and I was left with the sense of having learned something but not yet understanding what it was.