Why the Oscars red carpet is the place for politics 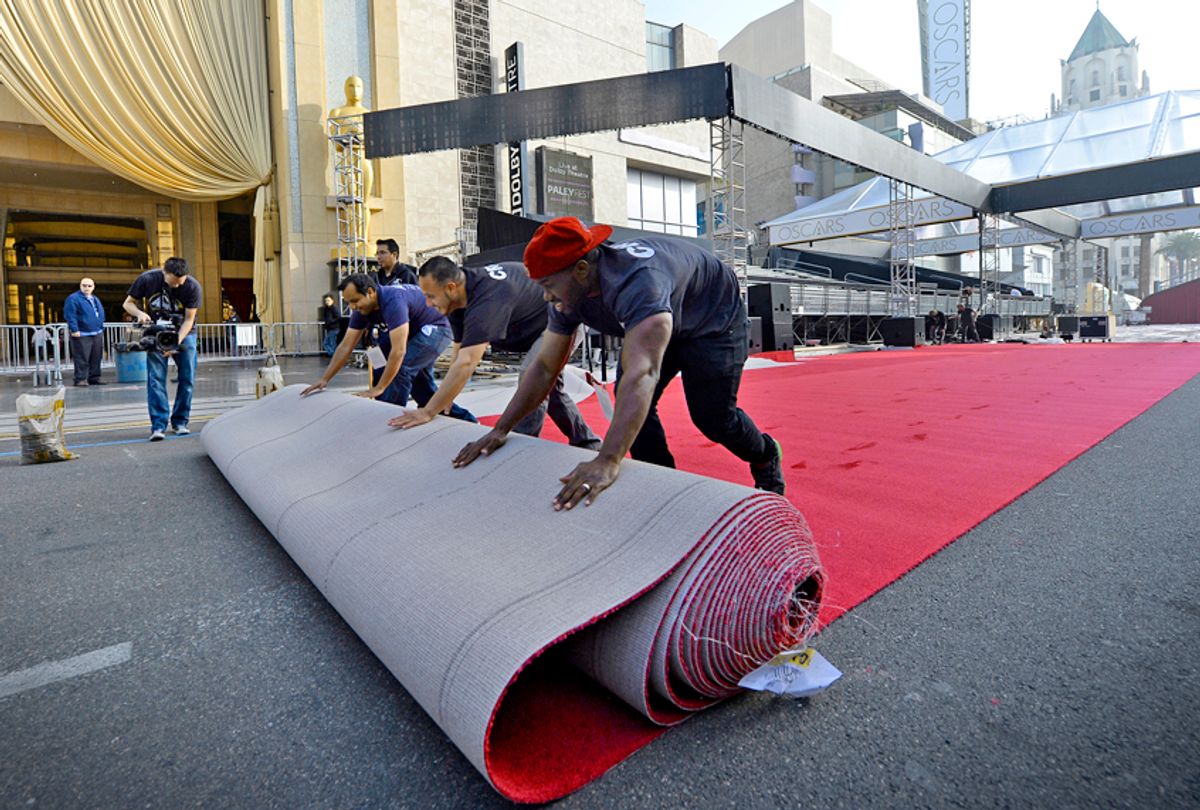 Sometimes you can make a statement without saying anything at all.

Throughout the 2018 awards show circuit, stars have used fashion as a form of protest. A-listers dressed in black at the Golden Globe Awards as they said "time's up" in protest of sexual harassment and workplace inequality. At the Grammys, some artists carried a white rose in a similar sign of unity.

In the wake of a tragic high school shooting in Florida, Hollywood luminaries will don orange pins in solidarity with the advocacy group Everytown for Gun Safety as they walk the red carpet at Sunday's 90th annual Academy Awards.

Following the Feb. 14 shooting that claimed the lives of 17 people in Parkland, celebrities will show their support for the teen survivors-turned-activists who have risen to become the leading voice on gun safety in America, organizing “March for Our Lives,” a planned demonstration against gun violence and mass shootings. George and Amal Clooney donated $500,000 in the name of their children, Ella and Alexander, to the event. Soon after, other A-listers including Oprah Winfrey and Steven Spielberg matched them dollar for dollar.

Gun control is not the only issue that celebrities will bring under the spotlight at the Oscars. Similar to the Golden Globe Awards, #MeToo will take center stage. The decade-old movement gained nationwide traction following mounting claims of sexual misconduct against producer Harvey Weinstein. The news unleashed a tidal wave of harassment allegations against many high-profile actors, directors, producers and men in media, and inspired actresses to launch a legal defense fund for survivors under the rallying cry “Time’s Up.” (That measure, perhaps, comes in defense of criticism that the movement has been dominated by accusers of prominent men in show business and the media, while the plight faced by working-class victims has been overlooked.)

This year, host Jimmy Kimmel plans to address it.

The movement could also intersect during Ryan Seacrest's red carpet celebrity interviews. The longtime E! presenter will remain on duty during Hollywood's biggest night, despite allegations of sexual harassment from his former stylist, the network announced. E!'s camera crew is sometimes considered the most important spot on any red carpet – but that may change on Sunday.

The decision to highlight #MeToo at the Oscars follows the fashion blackout at the 75th Golden Globe Awards, in which stars ditched their colorful gowns and wore black to draw attention to Hollywood’s culture of sexual misconduct. The blackout was punctuated with the debut of black “Time’s Up” pins.

While the Golden Globes red carpet received significant media attention for having politics at the forefront, it wasn’t the first time celebrities took to the red carpet to make a political statement. In the ’90s, actress Elizabeth Taylor began stepping out with a folded swath of red satin pinned onto her outfits to raise awareness for HIV/AIDS.

In 2010, Lady Gaga -- always one for bold entrances -- arrived at the MTV Video Music Awards with four military service members affected by “Don’t Ask, Don’t Tell,” the now-repealed federal law that banned lesbian, gay and bisexual Americans from serving openly in the U.S. military. Several days after the awards show, Gaga shared a video to her website in which she called on viewers to reach out to their senators. The legislation was repealed one year later, in September 2011.

At the 2017 Oscars, actresses including Emma Stone and Dakota Johnson attached Planned Parenthood pins to their outfits to show their support for the organization with Donald Trump newly installed as president. Other celebrities donned little blue ribbons to show their endorsement of the ACLU. Karlie Kloss, Lin Manuel Miranda, Barry Jenkins, Busy Philipps and Ruth Negga all pinned the blue ribbon to their clothes last March.

Every year during awards show season, some individuals argue that the red carpet is not the place to make political statements. Others doubt the effectiveness of speaking out on the carpet, while still others ridicule celebrities for only taking a stance when the cameras are watching. Despite criticism, showings of activism and protest on the red carpet have been largely effective in starting and steering conversation. Athletes have the world’s attention at the Olympics. President Trump has Twitter. So what makes the red carpet any different?