Being a fisherman or a sanitation worker is more dangerous: When we call cops "heroes" we excuse their crimes 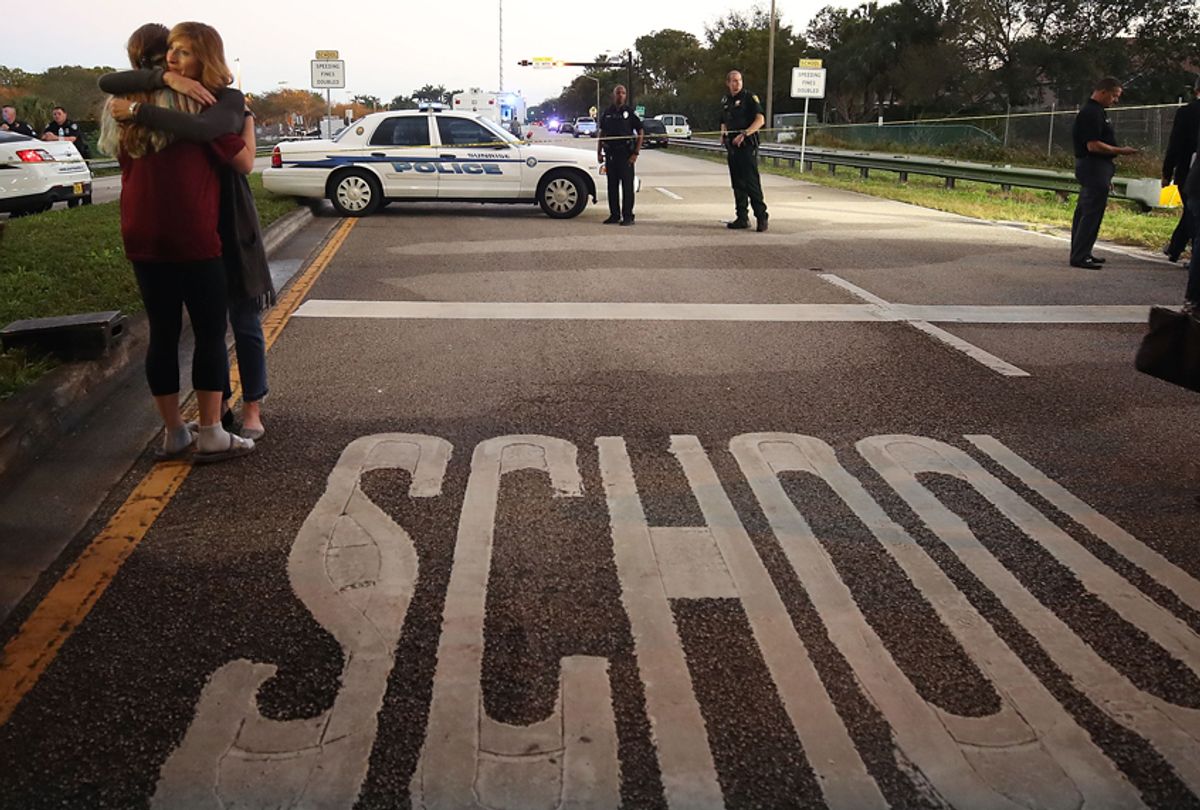 On that horrible day there were acts of great courage. Children used their bodies as shields to protect their fellow students from the fusillade of bullets fired by Cruz's assault rifle. Teachers sacrificed their lives to protect the young people in their care.

On that horrible day there were also moments of less than courageous behavior. As the Miami Herald reports:

[Scot] Peterson — named school resource officer of the year for Parkland in 2014 — was in another building, dealing with a student issue when the shots sounded. Armed with his sidearm, Peterson ran to the west side of Building 12 and set up in a defensive position, then did nothing for four minutes until the gunfire stopped, the sheriff said.

Several other Broward County sheriff's officers also arrived at the school. They too waited outside while the massacre took place.

There has been public outrage and condemnation directed at the local police and how they responded on that fateful day. Was this a failure of tactics and training? Were some of the police cowards? Were they afraid of being outgunned? How is it possible that they failed to rescue the children and teachers being massacred by Nikolas Cruz?

This shock and outrage may take different forms but it all flows from the same source: America's unhealthy culture of police worship, where cops are imagined as inherently noble, brave, well-intentioned and good people who only want to "serve and protect" the public.

As a working-class black American I am not allowed to believe such childish fictions. This is a matter of survival and a function of life lessons passed down from the past through to the present: America's police and the legal system in general all too often treats nonwhites as enemies to be controlled and oppressed, rather than as citizens to be respected and protected.

America's myths about the police take many forms.

There is the narrative that police have one the most dangerous jobs in the country. That is simply untrue. Trucking, logging, professional fishing, piloting airplanes or collecting trash as a sanitation worker are all more dangerous occupations than law enforcement. In fact, the No. 1 killer of police is not bullets or knives but traffic accidents.

Then there is the myth that there are supposedly only a "few bad apples" and that most police are not violent or abusive. Yet America's police culture and individual officers -- the "good apples" -- nurture, protect, and enable the "bad apples" in their midst. As such, the "good cops" are also culpable. Moreover, there are repeated studies and investigations that reveal the ways America's police culture is authoritarian, violent, racist and sexist, and both encourages and tolerates institutional corruption.

The police are supposed to be the "good guys with guns" who stop "the bad guys with guns." That too is a story that does not hold up to critical scrutiny. When police fire their weapons in a confrontation with an armed suspect, they miss approximately 80 percent of the time. Moreover, 27 percent of police report never having fired their weapons during their career. (For which we should likely be grateful.)

And then there is the muddled logic, contradiction and hypocrisy. Many of the same voices -- including President Donald Trump -- who condemn the Broward County deputies at Stoneman Douglas High as being "cowards" would also support any cop who says the magic phrase "I was in fear for my life" after he kills or grievously injures an unarmed black or brown person.

There are dozens if not hundreds of these incidents almost every year in America. The police are rarely if ever convicted of committing a crime, or otherwise punished for their actions.

Ultimately, the massacre at Stoneman Douglas High forces a question upon us: What is heroism?

A hero is someone who -- at great personal risk or threat of harm -- commits a selfless act in the service of another person or group. A hero is also someone not trained or compensated for his or her deeds.

Of course an individual police officer may be brave or courageous. But the label "hero" should not be applied to police easily or gratuitously.

Improving public safety requires taking police down from their pedestal and evaluating them as individuals who have chosen to do a necessary job, one that some police do expertly and fairly but where too many others fail.

An intervention in the best spirit of police work would likely have helped stop Nikolas Cruz's mass murder spree by gun in Parkland, Florida.

Intervening in the public culture of police worship will also help make sure that fewer black and brown, poor, working-class, mentally ill, disabled and other disadvantaged Americans are abused by our nation's police officers.