The #Resistance went nuts over a video of a financier playing an anti-fascist anthem, missing the many ironies 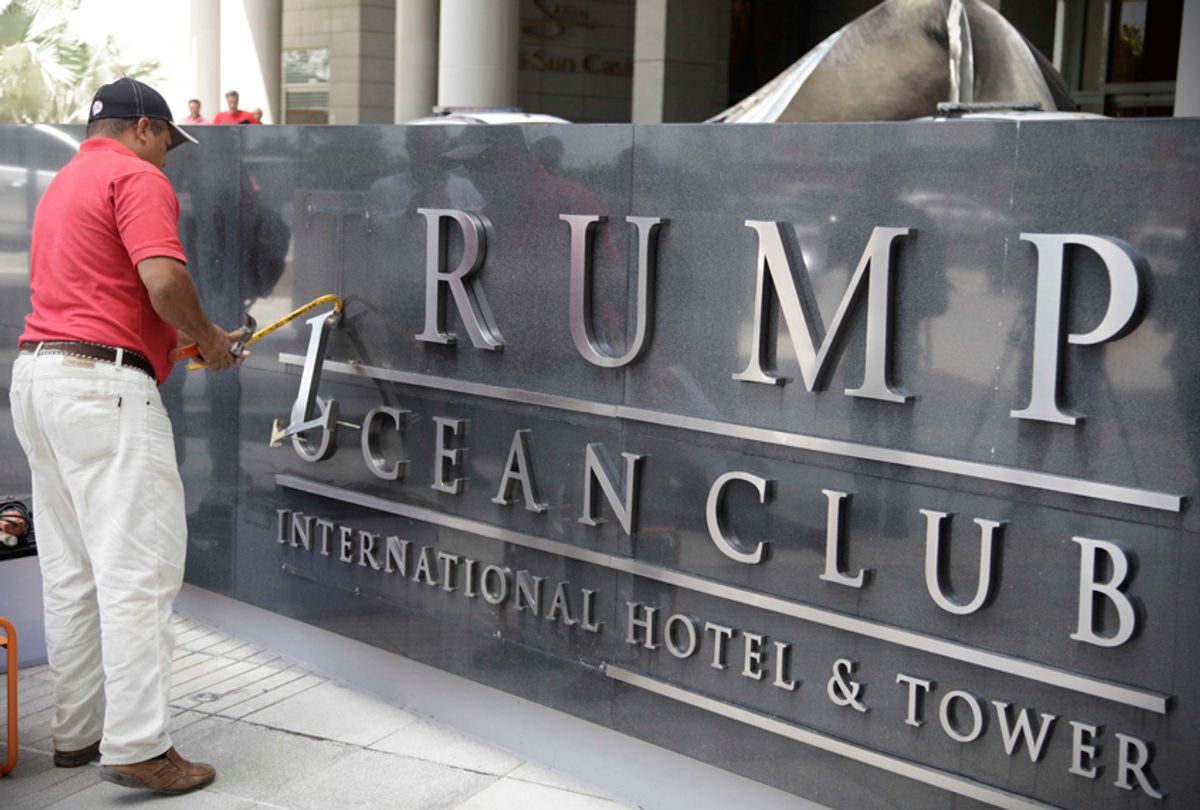 A man removes the word Trump from the marquee outside the Trump Ocean Club International Hotel and Tower in Panama City, March 5, 2018. (AP/Arnulfo Franco)
--

“Ogres are like onions,” the Duloc-ian political philosopher Shrek famously opined. “Onions have layers. Ogres have layers … you get it? We both have layers.” In a political and technological epoch whose defining characteristic appears to be its cascading layers of irony, our media discourse is comparable to an onion. A few days ago, we witnessed a Cypriot private equity fund manager, Orestes Fintiklis, briefly become a #Resistance icon after he was victorious in removing the “Trump” brand from the Panama City hotel in which his company is a majority owner. After succeeding in the Panamanian court system, Fintiklis celebrated in the lobby of the hotel by sitting at the piano to play “Akordeon,” an anti-fascist Greek song.

The only way I can possibly think to cover such a farce is to trace the onion outwards as it is peeled. Where you prefer to stop peeling really depends how trenchant you want to get. As such, I’ve written a different headline for each layer, which pole-vault upwards in scrutiny from BuzzFeed-style to Baffler-style as you keep peeling.

Let’s hope the famously petty president doesn’t get wind of being owned by this noble #Resistance hero. Orestes Fintiklis, the majority owner of the Trump Ocean Club International Hotel and Tower in Panama City, has been fighting with the Trump Organization in Panama City to get the Trump name scrubbed from his hotel. Fintiklis succeeded in the courts this week, and how did he celebrate? By sitting down and playing a Greek anti-fascist song on the piano in the hotel lobby.

Yass, queen! The internet went wild celebrating this #win for the #resistance:

Layer 2: An investor succeeds in getting the “Trump” brand off his hotel, citing bad branding

There are a lot of reasons that one might dislike the president; for Fintiklis, and many rich people generally, it’s not the man or his policies, but his brand. “Fintiklis, who manages the Miami-based private equity fund Ithaca Capital, [has] said Donald Trump's statements on immigration have destroyed his brand in Latin America,” the Associated Press reported. Fintiklis himself said, “Our investment has no future so long as the hotel is managed by an incompetent operator whose brand has been tarnished beyond repair,” per the AP.

It’s money that influenced Fintiklis, not morality. Or are they one and the same thing, given the nature of our economy?

Consider the song that Fintiklis played — artfully, I might add — on the baby grand in his hotel’s lobby. That would be “To Akordeon,” which most outlets reported as a “Greek anti-fascist song.” That isn’t quite accurate.

“To Akordeon” was composed by Manos Loïzos, a Greek composer who lived through the military junta in Greece. A card-carrying member of the Greek Communist Party, Loïzos spent time in the Soviet Union and died there in 1982.

Contrast Loïzos with Fintiklis, who is the “Director of Acquisitions” for Dolphin Capital Partners, according to his Bloomberg profile. The Oxford-educated businessman notes on his LinkedIn profile that he was a member of the “Private Equity Club” in grad school. It’s not a stretch to say that Loïzos may be spinning in his grave at the news of a bourgeois banker like Fintiklis appropriating his anthem. Or perhaps appreciating the absurdity?

This is the state of American politics in 2018: A private equity fund manager becomes a #Resistance hero, plays a socialist anthem on the piano, and the #Resistance goes unironically wild.

If you want to understand why many on the left mock the shallowness of the anti-Trump #Resistance, let this be your case study. Celebrating Fintiklis as a hero simply because he doesn't like Donald Trump illustrates an alarming lack of self-awareness when it comes to understanding what swept Trump into office in the first place. The #Resistance movement, like Hillary Clinton’s campaign before it, brought some questionable figures under one roof, including venture capitalist Marc Andreessen, Reagan spokesman Doug Elmets, former HP exec Meg Whitman and billionaires like Tom Steyer.

What rankles some folks on the progressive left about these alliances is that by bringing billionaires and right-wing architects into the same so-called movement, it presupposes that they’re on the same “side” as the rest of us, and share our political and economic interests. That couldn’t be further from the truth, as at least one 2016 candidate (cough, Bernie Sanders, cough) repetitiously pointed out.

Trump rose to power because of a neoliberal celebrity culture that presupposes fame and wealth to be synonymous with intelligence and work ethic. From Whitman to Elmets to Steyer to Fintiklis, these are the elite ruling-class types that rule the world, some in brutal and obvious fashion and others more subtly. It is our folly to celebrate them, even if they see an enemy in Trump.