He may no longer be the most-hated president of the 21st century, but Trump won't help Bush repair his legacy 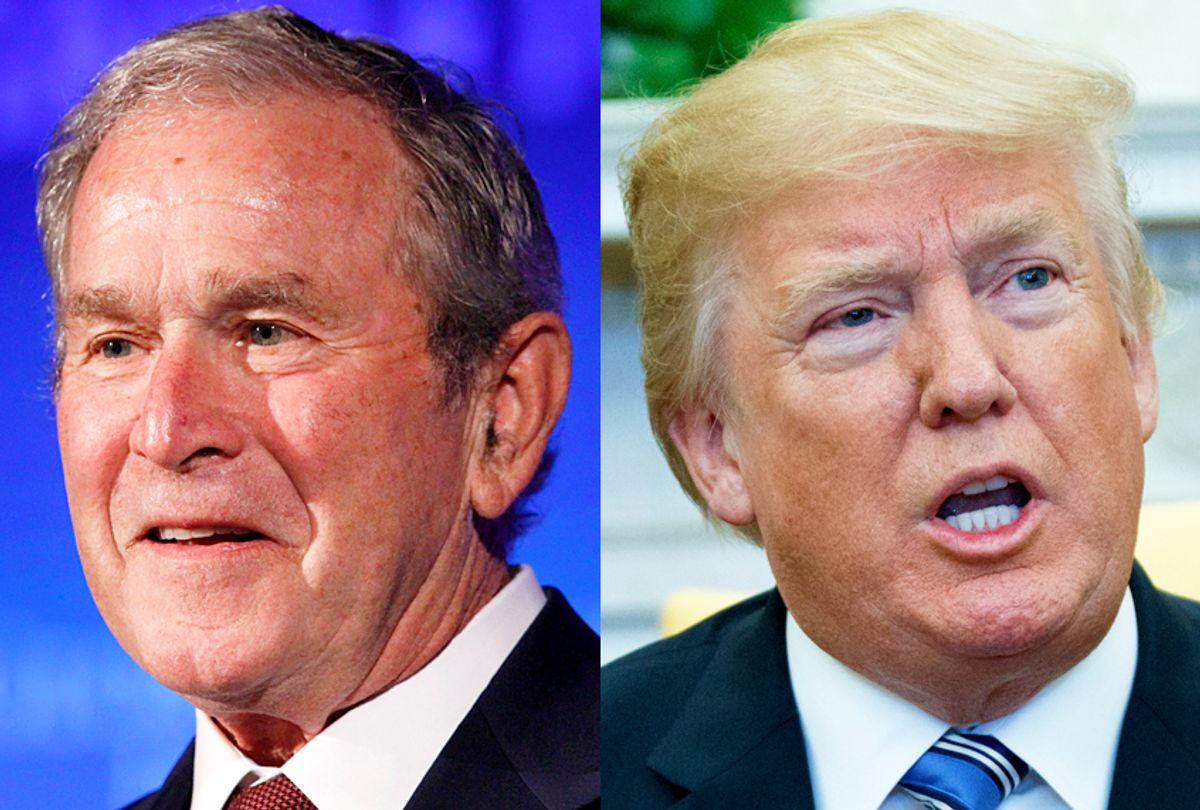 One of the Republican Party's most-famous faces appears to be thankful for the bombastic and unstable presence of President Donald Trump, believing the current White House resident could help grow his depleted stock.

Former president George W. Bush often smiles when the chaoses and scandals that are trademarks of Trump's administration enter into a conversation, according to a new report. "Without chiming in with the Trump critics, Bush is often heard to remark, unable to stifle his trademark smirk: 'Sorta makes me look pretty good, doesn't it?'" the National Journal reports.

"He’s shaking his head like everyone else, wondering why they can’t get their act together," a Republican official told the Journal. "He wants the guy to succeed, but thinks a lot of his problems are self-inflicted."

Bush's alleged desire for Trump to succeed seems a bit far-fetched after the tirades that Trump unleashed against Bush's brother, former Florida Gov. Jeb Bush, during their rival  bids for the 2016 GOP presidential nomination. Early in the race, Jeb Bush was considered to be a frontrunner.

Trump aside, George W. Bush's presidency was, at best, controversial. Both presidents won the White House despite losing the popular vote. The 2000 election was mired by a recount and subsequent lawsuit decided by the Supreme Court. Then there was the start of two wars in Iraq and Afghanistan, his administration's slow and tepid response to Hurricane Katrina and the dismantled economy he left for Barack Obama to sort out.

In a closed door Republican event over the weekend, Trump reportedly mocked Bush's intelligence and called his invasion of Iraq in 2003 "the single worst decision ever made," likening it to "throwing a big fat brick into a hornet's nest," CNN reported.

In the years following his presidency, Bush has expressed remorse for both the Iraq invasion and the economic crisis. He has also called the lack of indictment for the police officer responsible for the death of Eric Garner "hard to understand." But his new and silent strategy seems to be less about re-writing his wrongs than riding the benefits of the Trump wave to no longer being the most-controversial or most-hated president in the 21st century.

While the joke certainly landed, this isn't a viable approach for Bush to use to repair his legacy. Trump's blunder does not re-write Bush's past – being second worst doesn't mean you're either favorable or forgiven.