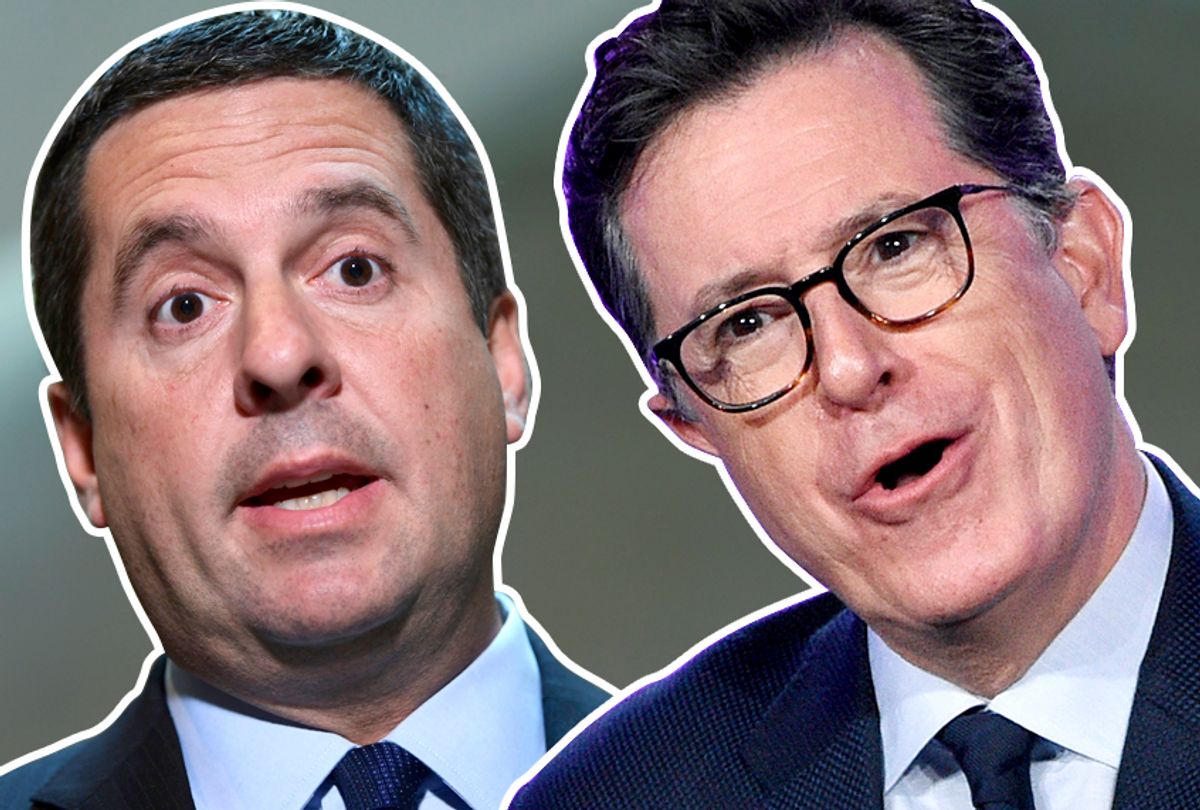 Stephen Colbert, with one 10-minute, late-night television sketch, completely revealed Rep. Devin Nunes, R-Calif., to be running a con job with his supposed investigation into Russian interference in the 2016 election.

The chairman of the House Intelligence Committee and his tireless pursuit of something — anything — that might derail Justice Department Special Counsel Robert Mueller’s investigation has become a fount of source material for late-night comedy. It’s no surprise that Nunes is a bit sensitive about his ridiculous face-plant of a memo that backfired spectacularly last month, after Trump’s hand-picked FBI director, Christopher Wray, blasted the Republican-scripted document as inaccurate and misleading.

Nunes’ investigation has descended to a nearly unprecedented level of blatant partisanship in recent months, essentially serving as an opposition research outlet working on behalf of the Trump White House. Last week, the liberal watchdog group Campaign for Accountability filed a complaint, following a New York Times report alleging that a Republican member of Nunes' committee had leaked text messages from Sen. Mark Warner, D-Va. -- the ranking member of the Senate Intelligence Committee -- to Fox News. (It is widely suspected that Nunes himself was the leaker.) Nunes then rushed before the Fox cameras to suggest that any criticism of him, even made in jest, was a national security threat.

In the “Late Show” segment that aired on Friday, Colbert traveled to Capitol Hill for a spoof mission that exposed the Nunes investigation as nothing more than a partisan farce. Colbert had the top Democrat on the House Intelligence Committee, Rep. Adam Schiff, D-Calif., read a five-word document: "It says, ‘Devin Nunes is a,’ and then it’s redacted,” Schiff said. The CBS host then asked various people what they thought the redacted word might be.

Explaining his skit on Monday, Colbert said, “So as much fun as we had down there, ultimately what we wanted was for Nunes to respond to us, a comedy show.”

Colbert thought the congressman wouldn't do it: “Say what you want about that guy, he's not that dumb . . . is what I thought,” Colbert added, before exclaiming with delight: “He took the bait!”

Indeed, hours after Donald Trump unleashed a Twitter torrent against actor Alec Baldwin -- who impersonates the president on "Saturday Night Live" -- Nunes, who has access to the nation’s most sensitive secrets, told Fox News that Stephen Colbert is a “danger to this country.”

The congressman added that “the left controls the universities in this country, Hollywood and the mainstream media, so conservatives in this country are under attack, and I think this is a great example of it.”

This is a familiar crutch for Nunes and other conservative lawmakers, especially as they struggle to get anything done while holding all the levers of power in the federal government: Republicans are victims of a grand conspiracy.

Nunes continued on his right-wing media rehabilitation tour undeterred, appearing on Fox News’ new show hosted by conservative shock-jock Mark Levin on Sunday to declare, “The media in this country is dead. It no longer exists and the American people need to understand this.”

Not only has Nunes been reduced to attacking late-night TV show hosts, he is now using his position of authority to undermine journalism and to push his personal propaganda site. As Amber Phillips notes in The Washington Post, Nunes appears to be echoing Donald Trump's authoritarian rhetoric:

Nunes's “danger” comment makes more sense when viewed through an authoritarian lens — that free speech can somehow undermine government that has been functioning for nearly 250 years.

The California congressman, a former member of Trump's transition team, also tried to discount the seriousness of the Russia investigation, telling Fox News' Neil Cavuto that there is no proof of wrongdoing on the part of Trump. Nunes said that when Republicans present “proof that not only did the Democratic Party collude and get information from the Russians, and then an investigation was opened up into the Trump campaign to spy on the Trump campaign,” the left “resort[s] to going to their friends in Hollywood to make fun of people and attack people who are trying to get to the truth.”

“I enjoy the attacks," he added. "If they want to continue to attack me, that’s fine.”

Nunes’ latest claim is so ridiculous that even a Fox host felt the need to push back against it.

“I think Nunes is being a little thin-skinned. I think it diminishes his place in this entire conversation when he responds to Colbert,” said Kennedy, co-host of “Outnumbered.”

From the outset of the House Russia investigation, Nunes has acted as an apparent agent of the White House, not as an impartial investigator. From attempting to covertly relay information to the Trump administration during his infamous "midnight run" to his refusal to call witnesses potentially damaging to Trump to the asymmetrical release of dueling memos in direct defiance of FBI and Justice Department advice, he has sought to undermine his own House investigation.

Nunes was forced to recuse himself from the Russia investigation -- before apparently reneging on that recusal -- and has become so ensconced in his partisan bubble that he is literally building a wall to separate Republican and Democratic staffers on his own committee. As Sen. Angus King, I-Maine, a member of the Senate Intelligence Committee, made clear over the weekend, communication between the two intelligence committees in the twin chambers of Congress has broken down entirely, largely because of Nunes’ partisan gamesmanship.

"We're only a couple hundred yards apart, but it's worlds apart in terms of the way we've approached this," King told NBC’s Chuck Todd on Sunday. "We're trying to just continue on on a bipartisan basis." His Senate committee, King said, hasn't produced "all the memos and counter-memos and that kind of thing and there really isn't that much of a relationship" between the House and Senate committees.

As Republicans in Congress and the Trump administration refuse to take action to secure the 2018 election from foreign intervention, Nunes’ suggestion that a comedy routine presents a national security threat should be enough for Speaker Paul Ryan to remove him from his committee chairmanship. Will it actually happen? Now that's funny.