"Nobody throws the glass of Chardonnay at the TV, ever?" Colbert asks Clinton 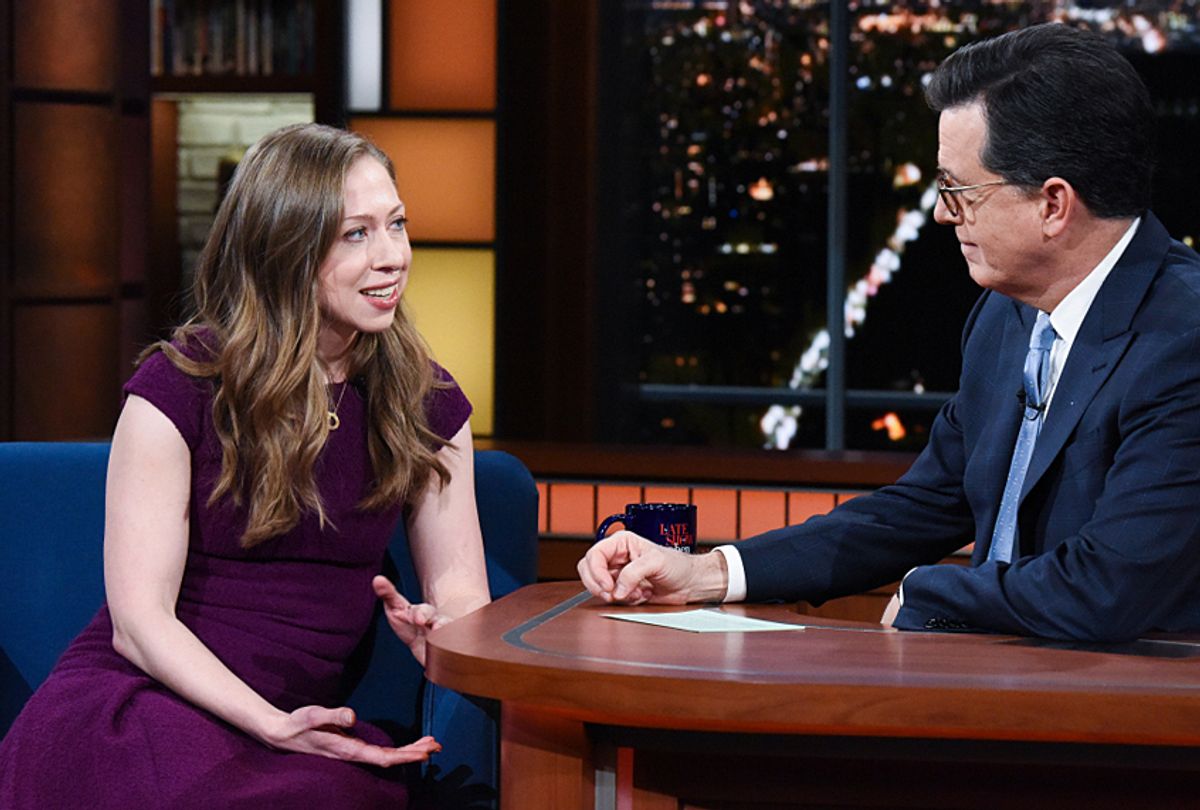 Late-night comedian Stephen Colbert begged Chelsea Clinton Monday night to "spill the tea" on the details of how her family is coping with the election of President Donald Trump.

"Now, your family has a particularly unique relationship emotionally to the fact that Donald Trump is president of the United States," Colbert said on the "Late Show."

To which Clinton shot back, "Stephen, I think that a lot of us have pretty unique emotional relationships to the fact that Donald Trump is president."

Colbert was eager for a glimpse behind the curtain, a juicy story or signs of raw emotion from one of the nation's most powerful political families, but Clinton downplayed any animated family conversations.

Clinton did offer a stoic answer, describing how, in the days since the election, her family has focused efforts on "pushing forward" and supporting political candidates and organizations. "Unfortunately, this administration is kind of the collision of cruelty and incompetence," she closed. It felt almost like a scripted reply at a presidential debate, and Colbert thought so too.

"Does your entire family speak in paragraphs?" Colbert asked. He added, "that was a real beautiful paragraph," but he wanted something more authentic.

"Nobody throws the glass of Chardonnay at the TV, ever?" Colbert asked, after Clinton continued to downplay any animated family conversations on the issue.

"It's just not really productive, right?" Clinton said, as she lifted her hands in the air.

"It's not productive but it feels so good," Colbert shot back. "C'mon your family has some weaknesses -- show one, c'mon be human here."

As he pounded his fist on the desk in jest, he asked, "What have you yelled about?"

Clinton insisted her focus remains on activism and on encouraging others to vote, and Colbert turned the conversation to Trump's daughter and senior adviser, Ivanka Trump.

"There has been some criticism of Ivanka Trump recently, of her role in the White House, or whether she should have a role in the White House," Colbert pointed out. "You were 20 when your father left office, but certainly you understand what it's like to be the child of the president. Were you asked to fix Middle East peace at any point?"

"No," Clinton replied to laughter, "that never came up."

Colbert asked Clinton if she felt sympathy for Ivanka Trump or if she thought Trump was fair game for criticism because she is not only the president's daughter, she also works for him.