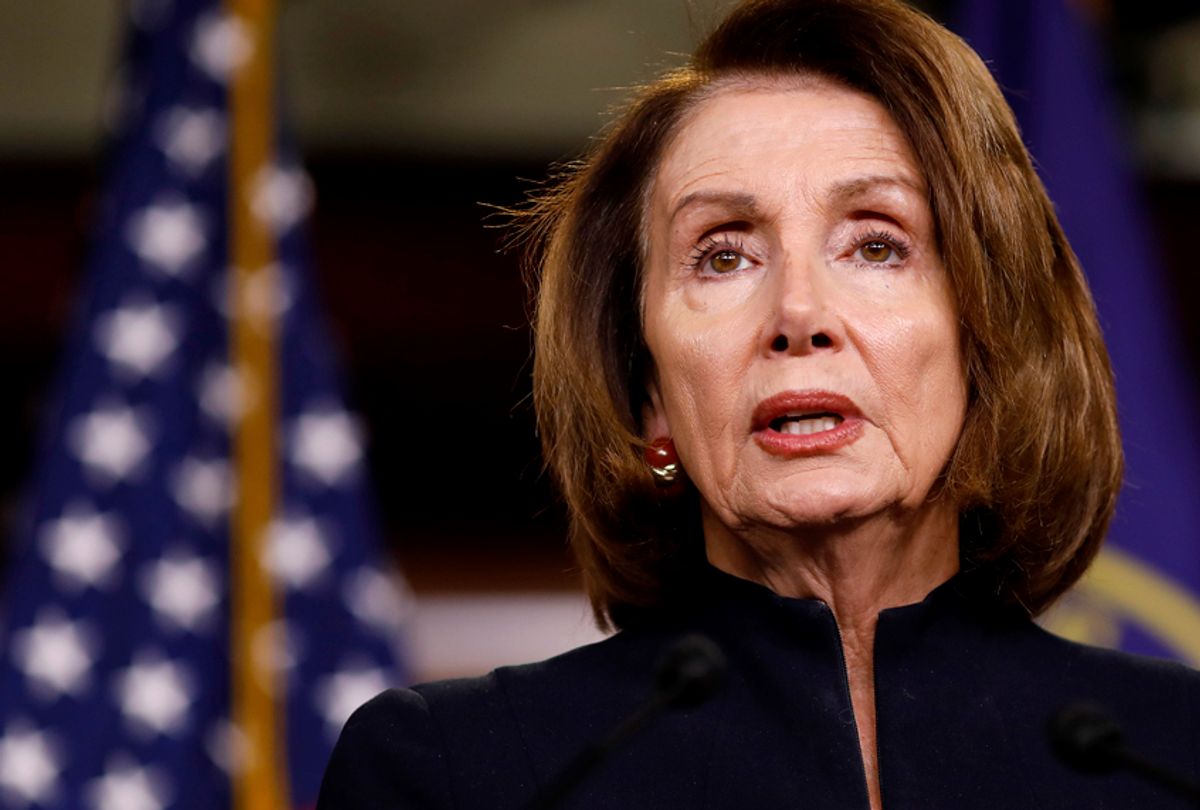 Open the email and Pelosi scolds Republicans for “playing politics with our national security.” She urges you to click a link if you agree. The link leads to a “Russia investigation survey,” which concludes with Pelosi doing exactly what she said wouldn’t do.

She asks you for money.

The email was the latest among more than two dozen DCCC-sponsored emails sent since January 2017 and reviewed by the Center for Public Integrity that woo potential suitors with the same false promise.

Each one of these emails are indeed solicitations. No other national political party committee — Republican and Democrat — so overtly serves such bogus fare. Save for a couple of Democratic Senatorial Campaign Committee messages of a similar sort, DCCC all but owns a monopoly on communications that begin with such a demonstrable lie.

For some Democrats, the DCCC’s fibbing amounts to a middling misdemeanor. They argue it’s trivial compared to a president, Donald Trump, whose habitual fabrications have earned him 244 (and counting) “false” or “pants on fire” demerits from Pulitzer Prize-winning fact checker PolitiFact.

But other liberals cry hypocrisy: Pelosi has pilloried the GOP for making “false representations” and trafficking in “alternative facts and fake news.” Former first lady Michelle Obama, perhaps the nation’s most recognizable Democrat after her husband, has pushed Democrats to reject deception and seek enlightenment. “When they go low, we go high,” she says.

Critics  also consider these tactics a tacit admission that Democrats are parking their principles in pursuit of 2018 midterm campaign cash.

“I find the DCCC's fundraising emails to be both annoying and pathetic — their hysterical pleas make the Democrats look like a no-good, lousy, one-party losing streak,” said Leo McDevitt, a copy writer and content manager from Escondido, California, who says he no longer donates to the DCCC because he’s put off by their solicitations.

“I have repeatedly told the DCCC that all of my donations are staying local,” said Linda Parsel of Texas, who avoids the DCCC and gives directly to Democratic candidates’ campaigns.

So why would the DCCC risk further alienating supporters with irksome fundraising emails, especially at a time when the committee, overseen by Rep. Ben Ray Luján of New Mexico, is already grappling with internal strife over how it supports candidates and involves itself in Democratic primaries? Last month, the DCCC even used committee resources to flame Laura Moser, a Democratic candidate running in a crowded Texas congressional primary contest.

Here’s one reason: The bait-and-switch “NOT asking for money” messages appear to work — at least more than they don’t.

The DCCC has in recent months posted wildly successful fundraising numbers, raising more in 2017 than it has in any other calendar year. The committee blasts out small-dollar donor-centric email solicitations of all sorts almost daily, while aggressively courting big-money contributors, too.

Former Vice President Joe Biden, Rep. Don Beyer of Virginia and Luján will, for example, gather March 21 at the suburban Washington, D.C., home of  real estate heiress Tori Winkler Thomas for a major DCCC fundraiser. Individual tickets begin at $17,500 and climb to $100,000 for a “VIP/Clutch” ticket, according to an invitation obtained by the Center for Public Integrity.

“Every time they hit send, money is going to pour in, there truly is no saturation point on the number of emails you can send — they all raise money,” notes Kristin Oblander, president of Atlanta-based fundraising firm The Oblander Group, whose past and present clients include Democratic presidential and congressional candidate committees. “The guaranteed revenue stream from the email blasts gives them flexibility to experiment with different subject lines and messages, which is what we are seeing with these.”

Consider: Individual contributors have poured $86.3 million into the DCCC’s campaign account from the beginning of 2017 to through the end of January. More than half of that amount came from people giving $200 or less — the kinds of modest contributions online fundraising campaigns target.

The DCCC’s haul is more than three times what individual donors have given — $24.5 million — to its conservative counterpart, the National Republican Congressional Committee, according to Federal Election Commission records.

Such fundraising success is a point of pride for Democrats, who have long lamented Republicans perceived political fundraising advantage this decade following several federal court decisions, such as Citizens United v. FEC, that make it easier than ever for political committees to raise big money. The DCCC has also outshone its big sibling, the Democratic National Committee, which has badly trailed the Republican National Committee in fundraising of late.

While Frost is “not overly impressed” with what he deemed “the sky is falling”-style fundraising emails — Pelosi on Wednesday sent one titled “DEVASTATING setback” — he noted that online fundraising is still an “evolving art form” best paired with old-fashioned, meet-and-greet fundraisers that cater to major  donors. On both counts, Frost added, Pelosi and the DCCC are winning.

Current DCCC leaders, for their part, aren’t so interested in discussing their fundraising playbook.

“We are going to pass on commenting,” DCCC spokesman Tyler Law said.

Luján, who himself has sent “NOT asking for money” emails to supporters, told the Washington Post that the DCCC’s war chest will allow it “to invest in campaigns across the largest battlefield in a decade.”

A coast-to-coast strategy is non-negotiable for Democrats who are striving to  win Congress in November, and dealTrump, who now enjoys GOP majorities in both the House and Senate, a massive political defeat. Republicans today occupy 241 U.S. House seats to the Democrats’ 194, so  the DCCC wants to endlessly vacuum dollars to help their most competitive candidates win seats.

The NRCC is hardly immune from fundraising efforts that raise ethical questions. In December, it dangled an “all expenses paid” trip to the Trump International Hotel in Washington, D.C., as a potential prize for making a contribution. In February, the committee enticed supporters with Mother’s Day brunch at the “luxurious Trump Winery” in Virginia.

In short, the NRCC is filling its coffer while promoting — free of charge — Trump family commercial ventures from which the president still profits.

While neither the DCCC or NRCC emails are illegal, the NRCC emails “strike me as unseemly for all the reasons the president’s involvement with these properties is unseemly,” said Adav Noti, chief of staff at the nonpartisan Campaign Legal Center and former associate general counsel for policy at the Federal Election Commission. NRCC spokesman Jesse Hunt declined to comment on fundraising techniques.

But these NRCC messages, from subject line to contribution form, don’t, as the DCCC messages do, masquerade as something they’re not.

“They must think it works if they keep doing it, but I can't see how," Steel said.

It’s understandable what the DCCC is trying to accomplish with its “NOT asking for money” come-ons: to get people to simply open DCCC emails. The messages are competing with a multitude of others — from companies, candidates, organizations and so on, notes Emily Gittleman, digital director for 50+1 Strategies, a California-based political consulting firm whose clients include liberal candidates and causes.

But the DCCC risks losing supporters’ trust if they feel lied to.

“People get fed up and unsubscribe,” Gittleman said. “For an organization like the DCCC, who is not using their email list for a single campaign or a single cycle, they should put their energy into understanding their subscribers and sending them content they want to see.”

Said Oblander: “I’d be more comfortable with a different subject line that pulls the recipient in based on the message itself — ‘Anti Trump!’ versus ‘not asking for money.’ But they are merely doing what is currently working well for them.”

So long as the DCCC’s fundraising efforts are indeed working, the ends of defeating Republicans in the 2018 midterms should justify the means — within reason, said Matt Hodges, a software engineer and Democrat from Albuquerque, New Mexico.

Short of purposely misleading or scaring recipients, Hodges said of the DCCC, “I say full steam ahead with the strategy.”

Circumstances may nevertheless force national Democrats to reconsider how they hunt for contributions: The NRCC in January outraised the DCCC, $10.1 million to $9.35 million — a turn of fortunes for congressional Republicans, whose fundraising last year lagged well behind congressional Democrats.

Since the two committees reported those numbers to the FEC on Feb. 20, the DCCC hasn’t sent a “NOT asking for money” email to its general supporter list.

The DCCC has, however, sent at least one email each day that directly asks for money.

The Center for Public Integrity is a nonprofit investigative journalism organization based in Washington, D.C.