Donald Trump, you're no William McKinley

The president recently cited William McKinley to promote his tariff bill, but he really shouldn't have 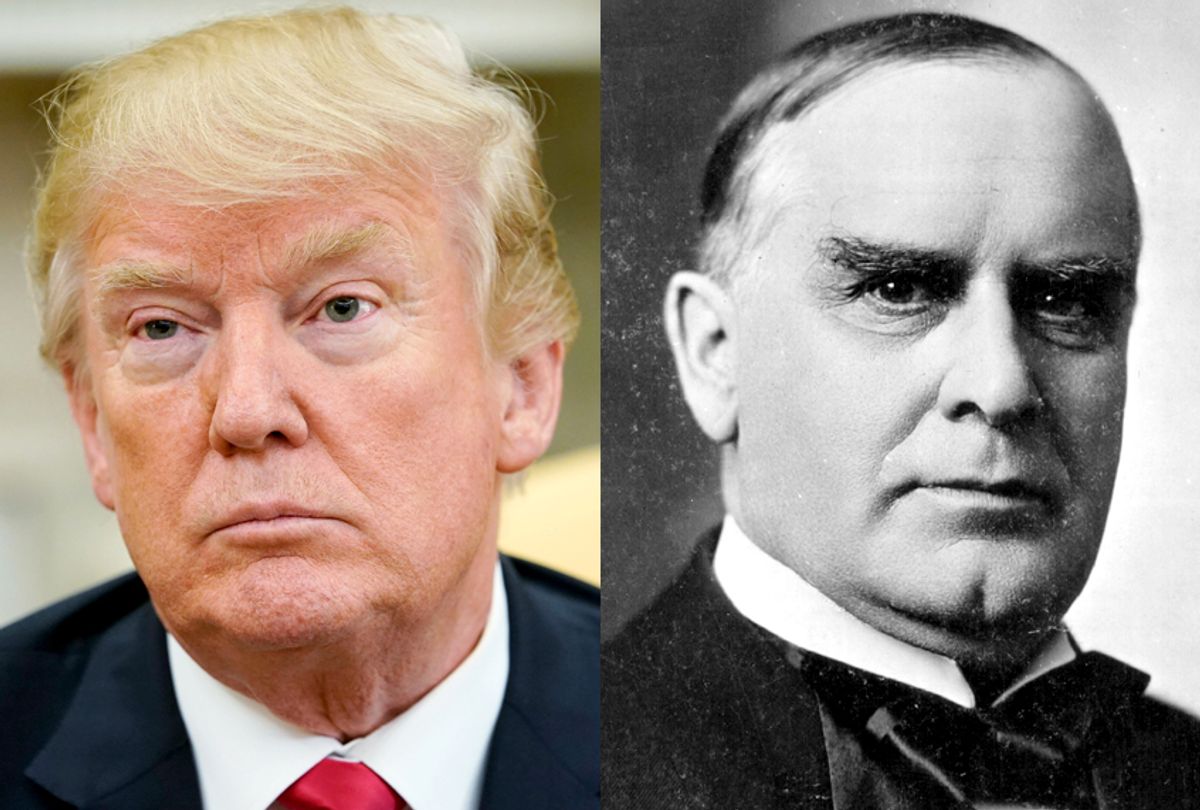 It's rare to see a sitting president cite William McKinley. America's 25th commander in chief wasn't exactly a bad leader, but he was hardly one of the more inspirational ones either. So why did President Donald Trump recently bring him up?

Oh, of course. Well, Trump, let me explain why McKinley's name shouldn't be anywhere near your lips.

1. William McKinley had a reputation as a kind man.

This may seem like a trivial detail, but it actually makes a world of a difference. Even McKinley's fiercest political opponents regarded him as a fundamentally decent human being. Although he was passionate about his beliefs — particularly imposing protectionist tariff rates — his contemporaries described him as a genial figure, one who could win affection simply by being himself. The ability to project genuine empathy is crucial for a successful leader, and Trump's conspicuous inability to do so is drawn into sharper relief when he is compared to McKinley.

2. William McKinley had the full support of a Republican Congress when he pushed for higher tariffs.

I know this is a hard thing to believe in an era when everyone and their dog seems to denounce partisanship on a conceptual level, but political parties have a good reason for existing. They allow a nation as demographically and ideologically pluralistic as the U.S. to create workable coalitions that, when given control of the government, can achieve meaningful progress on important issues. Such was the case when McKinley successfully pushed for higher tariffs as chairman of the House Ways and Means Committee. This was actually part of a larger slew of legislation passed during the first two years of President Benjamin Harrison's administration that included some of America's earliest environmental bills, antitrust laws and welfare-equivalent programs (in the form of a generous bill for Civil War veterans and their dependents). These things were done with the full support of the Republican Party, and although the GOP wound up paying a political price for these measures in the 1890 midterm elections and 1892 presidential election, they were still able to use these policies as a platform for reclaiming power in the 1894 midterm elections and 1896 presidential election.

Their candidate in 1896, not coincidentally, was McKinley.

By contrast, Trump is going to have to push through his tariff measures without the support of much of his party, a decision that will almost certainly have dire political consequences for them in the future.

Perhaps McKinley's most important legacy was getting America involved in the Spanish-American War. To be fair, there is much that is shameful about this conflict; it was an unambiguous effort on America's part to become an imperialist might akin to late 19th-century superpowers like the United Kingdom and France, and was waged against a much weaker nation (the Spanish Empire) under tenuous pretenses (the explosion of the USS Maine). McKinley was even reluctant to get America into the war. As a a Civil War veteran, he realized the horrors of battle firsthand, and wasn't in a hurry to become an imperialist himself.

So why do I praise this policy? I don't — but I recognize that, if getting into the Spanish-American War was at one extreme, Trump's neo-isolationism is at the other. At a time when the major rivals for world power are dictatorships like Russia and China, America does not have the moral right to simply abdicate the status of world power that it began to acquire in 1898. Yet by alienating our allies, weakening our involvement in international alliances like NATO, decimating the State Department and taking a line so soft on Russia that it justifies speculation as to whether Trump has been compromised, the president has done more to undo America's status as a major world player than any president since McKinley's time.

The 1890s were an extremely racist, sexist and xenophobic era — see the racial paternalism that partially motivated the Spanish-American war, for example — but for a man of his time, McKinley was very progressive on these issues. Even though much of his party supported stricter immigration laws and would rhetorically denounce Catholics and Jews, McKinley bravely insisted that the GOP welcome everyone regardless of their religious or national background. Less admirable were McKinley's actions on civil rights for African-Americans — like most politicians of his era, he favored reconciliation with the South over racial justice — but, at the very least, it could be said that McKinley didn't do anything to worsen the situation.

In other words: McKinley was far from a perfect president, but he deserves much better than to have his legacy associated with Trump.